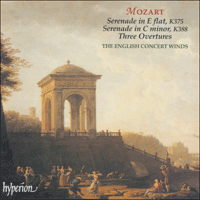 Mozart wrote much music for wind ensembles in various combinations. It is acknowledged that the three most substantial and important works, indeed masterpieces, are the three Serenades: K361 in B flat ('for thirteen wind instruments', known as the 'Gran Partita'), K375 and K388. The two latter are scored for wind octet, the first with much of the spirit of 'The Marriage of Figaro' (written at the same time) and the second in more darkly passionate C minor mood.

There have been many recordings of the Serenades over the years but this is the first to use new scores prepared directly from Mozart's manuscripts, and therefore to be free from the innumerable changes made in all earlier editions. In other words, this is our first opportunity to hear the works as Mozart wrote them. The scores are newly published by Camden Music.

The disc also includes Mozart's three most famous overtures, scored for wind to satisfy the fashion of the time.

‘This disc, full of imaginative and musicianly playing, can be firmly recommended’ (Gramophone)
‘One of the most enjoyable records of Mozart's wind music to appear for a long time. A delight!’ (The Penguin Guide to Compact Discs)

Both of these serenades date from the time of Die Entführung aus dem Serail, K375 being completed in October 1781 while work on the opera was actually under way. Within a few days of the opera’s Viennese premiere on 16 July 1782 Mozart put the finishing touches to K388.

Wind ensemble music (known in Germany as Harmoniemusik) was popular all over continental Europe and England from the mid-eighteenth century. At first it was developed as outdoor entertainment, particularly for warm summer evenings. That is the true meaning of ‘serenade’ (sera, Italian ‘evening’, the serene time) and Mozart actually described K388 as Nachtmusik (‘night music’). Wind instruments produce tones which carry well in the open air, something which has been known in military circles for centuries. But music for wind was not excluded from court and palace halls. It was also used to accompany banquets and other social events and was therefore not exclusively meant to be listened to with rapt attention. While a young lady might be transported by the delightful serenade of a handsome beau beneath her window, a hungry gathering at a feast would merely let the seductive sounds wash over them as a digestive aid. For indoor use, especially for weddings or academic celebrations, strings might be added, and so vague became the terminology that by 1787 Mozart could write a serenade for strings totally without winds, Eine kleine Nachtmusik.

The instrumental grouping for wind serenades was established quite early on as a sextet comprising two melody instruments (flutes, oboes or clarinets; sometimes even cors anglais), two sustaining horns, and two bassoons as a foundation. There were, however, many exceptions; it depended upon which instruments were available. Horns were, in general, the only brass to invade the woodwind preserve. Percussion was very rare. Large works sometimes required a stringed bass to give 16’ richness.

Early serenade divertimenti of the 1760s, typified by those of Joseph Haydn (often termed Feldpartien: ‘field music’ or ‘open air music’) were lightweight and cheerful in mood, the skill with which they were written barely perceived by those they so agreeably entertained. Some composers countered such indifference by rewriting whole operas for wind groups. This encouraged attentive listening by presenting audiences with re-runs of favourite melodies while simultaneously relieving them of the chore of having to dress up for the theatre. Mozart, though he arranged parts of Die Entführung for wind, tackled audience apathy from a different angle. Early on he had produced a number of lightweight wind divertimenti, but in 1781 he was almost certainly the first to ignore the lip and lung stress which a long work would put on wind players. He wrote a wind serenade which was as long as his full orchestral serenades such as K250 (written for the Haffner family) and K320, with its famous posthorn solo. This was K361, a Gran Partita for twelve winds and double bass. As with the serenades in this recording, the music is ambitious and contains some of his finest musical devices. The works not only invite close attention, they demand it. Their grand designs opened up possibilities for other composers. Paul Anton Wineberger (1758-1821) in the Oettingen Wallerstein court contributed many through the 1780s and 1790s, as did the Czech-born Frantíšek Kramás (Franz Krommer) (1759-1831) from 1803: all symphony-length wind partitas of considerable complexity and importance.

Serenade in E flat major, K375
The E flat Serenade was a subject of second thoughts. The first version was for pairs of clarinets, horns, and bassoons, but within a short while the Viennese court established a wind octet which added oboes to this line-up. In desperate haste (as the autograph manuscript reveals) Mozart rewrote the work, introducing structural changes and skilfully integrating oboes into the score. Doubtless he was anxious to display his abilities to the emperor in the (vain) hope of a permanent appointment at court, since he had broken off relations with the Archbishop of Salzburg, his supercilious and overbearing former employer.

In overall layout the serenade follows early Haydn examples: a slow movement framed by two minuets, the whole framed by two fast movements. A marching rhythm – a typical Mozart opening – begins the ‘Allegro maestoso’, but untypical elements soon appear, among them the lack of exposition repeat and the short, somewhat vague, development. Stranger still, the second subject is replaced in the recapitulation by a curious episode announced by horn solo. Mozart rarely did anything without good reason, but these departures from convention seem quite unreasonable. A magical quiet coda, however, makes amends.

The two minuets differ one from the other in style. The first opens with a strikingly ceremonial unison, the second with a smooth clarinet solo leading to playful episodes. Their respective trio sections also offer strong contrasts, that of Minuet I displaying a pleasing character with pulsating horns, while pulsating bassoons accompany a kind of country dance as a centrepiece of Minuet II. Between these minuets lies a seductive Adagio which in melody, harmony, and instrumental resource, holds a place amongst Mozart’s finest inspirations. A high-spirited Rondo with virtuoso episodes closes the work. Mozart’s sly wit delays the third statement of the rondo theme for so long that one wonders whether it will ever reappear.

Serenade in C minor, K388
We have established that serenades are meant for easy, albeit attentive, listening. So what is K388 doing in C minor, a key for which Mozart reserved his most severe, tragic utterances? Conceived from the start in full octet scoring, this extraordinary work exhibits the characteristics of a Sturm und Drang symphony, even down to its four-movement pattern. The opening is uncompromisingly tragic, even angry, with relief coming only in the melodious major-keyed second subject, announced by oboe. At least the formal exposition repeat is present, and the development, for all its severity, is of a length to preserve traditional sonata-form proportions. Minor tonality is maintained throughout the recapitulation, even for the second subject. Balm comes in the Andante, a lyrical 3/8 movement in E flat.

Mozart’s friend Joseph Haydn probably provided the influence for the last two movements. Described as ‘Menuetto in Canone’, the third follows Haydn’s precedent in Symphony No 44 (another minor-keyed work, though in E minor) in being in strict canon, while the trio provides an inverted answer to the oboe’s theme. Such contrapuntal fireworks are rare in Mozart and unheard of in other ‘entertainment’ music of the serenade/divertimento kind. The composer was determined that his listeners should really listen! For the finale he turns to another Haydn device: variations. He even comes close to borrowing a Haydn theme (Symphony No 42, finale, also variations) but treats it rather differently. An intriguing succession of variations explores unusual instrumental combinations in which every member of the octet enjoys moments of glory. A last-moment gesture to relieve tension: the final variation is in the major.

This serenade, like K375, was also the subject of second thoughts, for in the spring of 1787 Mozart rescored it for string quintet (K406). For this recording of the original wind version the Camden Music Original Mozart Edition was used. It corrects some 350 errors which had crept into earlier editions by Breitkopf und Härtel and others. Mozart’s final page of the autograph is missing. For this edition Camden Music reconstructed it from the string quintet version.

Overtures arranged for wind
A favourite concert item has always been the overture divorced from its opera. When an introductory instrumental piece was first used before an opera it was very short, often merely a fanfare or a flourish. Its purpose was to interrupt chatter, to encourage the taking of seats amongst latecomers, and to herald the rise of the curtain. As such, it was barely recognized as music. Gradually it gained in importance until Gluck’s overtures became integral parts of the dramas by setting the moods of their stories. Mozart’s overtures are sometimes geared to the atmosphere of their operas. The three recorded here certainly are, and each has become immensely popular in its own right.

Recognizing this, some composers specialized in adapting opera overtures for different combinations of instruments and, naturally, those required to produce music for wind groups transcribed accordingly. Jan Vent (or Went, or Wendt, 1745-1801), who transcribed the Marriage of Figaro Overture (as well as several complete Mozart operas) was a Bohemian wind-player, at first in Prague and later in Vienna, where his musical activities paid rather better than did Mozart’s.

This arrangement of the Magic Flute Overture is by Karl Heidenreich, a mysterious figure of whom all that is known is his birth date (1879) and his nationality (Austrian). We may assume that he was a wind player. Rather more is known about the Bohemian oboist Josef Triebensee (1772-1846), who arranged the Don Giovanni Overture. Like Vent, he worked in Vienna, actually playing in the first performance of The Magic Flute on 30 September 1791, which Mozart directed only about two months before his death. Triebensee spent his last thirty years in Prague and, in addition to very many wind transcriptions, left an impressive quantity of original music, including a dozen operas.