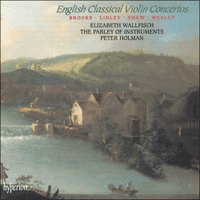 These four delightful concertos are the work of young men: Linley and Wesley were still in their mid teens when they wrote them, Shaw and Brooks probably not much older. It reminds us that artistic talent tended to be fostered and developed early at a time when lives were shorter and more uncertain than today. The work by Linley is the only survivor of his twenty violin concertos and strongly shows the influence of his Italian travels. The Wesley is similarly bold in the juxtaposition of apparently contrasting styles, here the Classical and the Baroque.

While Shaw and Brooks remain in rather greater obscurity (the latter not even earning a mention in Grove), their concertos are equally attractive and assured.

‘Playing of touching beauty in the slow movements and infectious energy elsewhere, supported by a robust and fragrant orchestral accompaniment. Bravo to all concerned for another distinctive release in the [English Orpheus] series’ (Gramophone)
‘This disc proves as delightful as it is surprising … a disc of rarities that will give much unexpected pleasure’ (Early Music Review)
‘The performances transcend specialists' interest and the recording should therefore appeal to the broadest possible range of listeners. Highly recommended’ (Fanfare, USA)

Bath was the most fashionable city in England after London in the late eighteenth century. It had been famous for its medicinal spring since Roman times, but it only began to be developed as a spa in the late seventeenth century. A frenzy of speculative building from the 1740s rapidly produced the elegant city we know today, and filling the houses with fashionable and wealthy tenants produced a voracious demand for concerts, balls, plays, operas and other forms of entertainment. The demand for music in Bath was met by a community of local musicians, often augmented in the season by stars from London. Three of the concertos recorded here are the work of Bath musicians and were probably written for concerts in the city. Samuel Wesley, the composer of the remaining concerto, also had Somerset connections: he was born in Bristol, though his family moved to London when he was a child. All four concertos are the work of young men. Linley and Wesley were still in their mid-teens when they wrote them; Shaw and Brooks were probably not much older. It reminds us that artistic talent tended to be fostered and developed early at a time when lives were shorter and more uncertain than ours.

The Linleys were the most important and influential family of musicians in eighteenth-century Bath. Thomas Linley the elder was the son of a builder and carpenter who moved to the city in the late 1740s to take advantage of the building boom. He became a harpsichordist, singing teacher and composer, and started to direct concerts there in the mid-1750s, gradually involving his talented children in them: Elizabeth, Mary and Maria were precociously gifted singers, while Thomas junior played a violin concerto in Bristol at the age of eight, and began to compose soon after. Thomas went to study with Nardini in Florence for three years in 1768, where he met and befriended Mozart, his exact contemporary. On his return in 1771 he became Bath’s leading violinist, a position he retained until 1776 when his father became one of the managers of the Drury Lane Theatre and the family moved to London. He died two years later at the age of twenty-two in a boating accident at Grimsthorpe Castle in Lincolnshire.

Thomas Linley is said to have composed at least twenty violin concertos, but only one survives complete. The score was included in one of the memorial volumes compiled for George III after the composer’s death and it is still in the Royal Music Collection of the British Library. It was probably written after his return to Bath from Italy, for it displays a mature grasp of the galant idiom of his teacher Nardini and other Italians, and, of course, immigrants resident in London, such as J C Bach and C F Abel. In particular, the solo part in the first movement is much more varied than in the English concertos he would have known before he left home. It does not consist just of rapid scales and arpeggios, but also includes themes borrowed from the ritornelli, often presented in the highest register of the violin, as well as fearsome passages in thirds, sixths and octaves—some of which imitate hunting horns. The orchestral writing, too, is unusually varied and imaginative, with haunting piano cadences coloured by antique suspensions and the rich colours of horns and bassoons doubling the strings. The brief but impassioned slow movement is in the ‘Scotch’ style fashionable at the time, while the finale is a delicious Rondeau in gavotte rhythm with hints of distant bagpipes.

Samuel Wesley also mixes elements of the Baroque and Classical styles in an effective way in his D major Concerto of 1781. It is the second of seven violin concertos he wrote between 1779 and 1785 for the concerts he organized with his brother Charles in the family house in Chesterfield Street, Marylebone; Wesley was just fifteen at the time. It contains some extremely taxing solo writing, with high positions and elaborate double stops, while the first movement is an assured example of mature Classical concerto form—though, at more than 350 bars, it also shows that he had not yet learned when to stop! The slow movement has some attractive ethereal passages for three solo violins, while the helter-skelter finale is delightfully sure-footed. From time to time Wesley throws in a cheeky quotation from the march in Gluck’s La rencontre imprévue (1764), known in German as Die Pilgrimme von Mecca, which Mozart used as the basis of a set of piano variations. It is not clear how he came across the theme, for Gluck’s opera does not seem to have been produced or published in London.

Thomas Shaw and James Brooks are much more obscure figures than Linley or Wesley though their concertos are equally attractive and assured. Shaw was probably born in Bath in the early 1750s. His father was a double bass player in Bath for many years, and he was active as a violinist there from about 1770 to 1776 or 1777, when he went to London. His career seems to have been shaped by his rivalry with Thomas Linley junior. Indeed, he was a leading member of the breakaway group of musicians led by William Herschel that in 1772 began to challenge the hold Thomas Linley senior exercised over concert life in Bath and Bristol. Herschel and Shaw gave a number of concerts together in the spring of 1772, with Herschel playing ‘the Changeable Harpsichord’ (a fortepiano) on one occasion, while on another Shaw played one of his own violin concertos ‘in a very masterly Manner and with much Taste’. Shaw was eventually reconciled to Thomas Linley senior, for he became leader of the Drury Lane band in 1786 and worked there for more than a decade. Not much is known about his later life, though Fanny Kemble came across him in the 1820s teaching music in Paris.

James Brooks’s career followed a similar pattern to Shaw’s. He was born in Bath in 1760, the son of the violinist John Brooks, and was playing with his father in Linley’s band at the New Assembly Rooms at the age of eleven. He is known to have played a violin concerto (perhaps the one recorded here) in Bath on 23 April 1783, though he moved to London soon after, and played in the orchestra for the 1784 Handel Commemoration in Westminster Abbey. He returned to Somerset at some point, for he is mentioned in Bristol concert announcements in the 1790s. In 1800 he became leader of the band at Vauxhall Gardens, and subsequently published some Vauxhall songs; he died in London in December 1809.

Brooks and Shaw were probably close friends. Their violin concertos are similar in style and form, and they were both issued in parts by the London publisher Longman & Broderip, probably at the same time; the title-page of the Brooks states it is ‘No 1’, but no sequel is known. Although they were published in London, they were probably written in Bath for the concerts there. They use the same pattern of movements, with an opening Allegro in a Mozartian march rhythm, a brief slow movement setting an apparently invented tune in the ‘Scotch’ style, and a rondo in the 6/8 hunting idiom, with prominent horn passages. Their solo parts are demanding but idiomatically conceived for the violin and they are thoroughly up-to-date, with a profusion of elegant, tuneful ideas in the manner of J C Bach. Not all English composers of the period, it seems, remained wedded to the past.

Two features of this recording need some explanation. The first is the use of a concertino of two violins, cello and continuo to accompany the soloist. This practice was derived from the concerto grosso, and seems to have been universal among English concerto composers of the late eighteenth century; it is still found in James Hook’s Clarinet Concerto of 1812 (recorded on CDH55261). It is indicated by the consistent omission of the viola and the wind instruments in the solo passages, and by the occasional solo and tutti mark. Further research needs to be done in this area, but it seems that the practice was also common on the Continent. It has been argued, for instance, that Mozart used a concertino to accompany the solo sections of his piano concertos. In the 1770s and ’80s English orchestras were still directed by the leader and the continuo player, and a keyboard is certainly needed in many places in these concertos, not least at the end of cadenzas where a dominant chord is required under the soloist’s trill. Doubtless a harpsichord would still have been in use in many places, but I was encouraged to choose a fortepiano by the reference to Herschel playing a ‘changeable harpsichord’ in Bath as early as 1772, and by the up-to-date style of most of the music, which demands carefully graded dynamics.