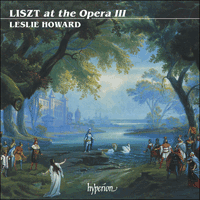 The complete music for solo piano, Vol. 30 - Liszt at the Opera III

Cover artwork: Design for Act I of Wagner’s Lohengrin (on the shore of the Schelde) (1868) by Heinrich Döll

This third gathering of Liszt’s many piano works based upon operas is largely related to operas which remain in the modern mainstream repertoire, yet includes a number of rarities as far as Liszt’s pieces are concerned. As in the previous offerings under the aegis of ‘Liszt at the Opera’, the works range from assiduous bar-for-bar transcriptions to the most elaborate and original fantasies.

The transcription of the overture to Weber’s Oberon is, like that of the Freischütz Overture, a literal piano version of the original, but Liszt offers a number of passages in alternative pianistic garb which actually convey a better sense of the spirit of the orchestra—and this is among the most spirited of Weber’s pieces.

The Fantasie über Themen aus Figaro und Don Giovanni is a very different proposition. The piece commonly known as the ‘Figaro Fantasy’ is a reworking by Busoni of just part of Liszt’s original conception: he eliminates all the references to Don Giovanni except for a little of the figuration leading to the coda. Liszt’s almost-complete manuscript (the lacunae of which have been completed for performance and publication by the present writer) shows a much larger work which revolves around Cherubino’s aria ‘Voi che sapete’ and Figaro’s aria ‘Non più andrai’ from Figaro and the minuet scene—with the on-stage orchestras playing two other melodies in different time signatures—from Don Giovanni. The whole thing becomes a complex music drama in which a kind of warning may be inferred that the carefree philandering of a Cherubino may end up the profligacy of a Don Giovanni unless the sensible advice of a Figaro is heeded. The musical connections betwen the operas are fully exploited—after all, Mozart himself quotes Figaro’s aria in the supper scene of Don Giovanni, and the third dance motif in the minuet scene of ‘the Don’ is almost identical to one of Figaro’s phrases—and Liszt manages to get the three dances and Figaro’s motif woven together.

Although Liszt played the piece in Berlin in 1843, he left the manuscript in a slightly unfinished state and certainly did not commence the meticulous preparation of it for his printer (he usually marked up important printing details in coloured crayon, and dynamics, tempo changes, pedal marks and other performance directions in coloured ink). The manuscript shows his method of composition of such a fantasy quite clearly: the broad outlines, such as the new themes or sections, are commenced on new pages, and space is left to concoct transition material. The introduction, the two pieces from Figaro, the Don Giovanni minuet and the coda are each in self-contained parts of the manuscript. On several occasions Liszt has marked some repeated figures for possible excision by placing the fragments in brackets with a question mark over them. These tiny tightenings of the structure add up to just a few bars, and they are observed here. The penultimate section breaks off in the middle of some transitional material which does not join happily to the coda. For this performance the sequence has been extended by one bar and two bars derived from earlier material have been added to make the join. The very end of the work is also missing (Liszt may well have improvised both of these sections in performance), but it is clear that the end is fast approaching and that it conforms closely to the closing bars of Act I of Figaro. So the completion of the coda required the addition of a further fifteen bars, making the whole work of 647 bars. It can be seen, therefore, that very little was required to make performable this grand piece, and it remains a mystery quite why Busoni suppressed so much of the work in his edition.

The operas of Verdi supplied Liszt with a good many ideas for operatic fantasies, and the Paraphrases de concert on Ernani, Il Trovatore and Rigoletto are amongst Liszt’s finest. They were issued as a set, although the publisher managed not to print them in Liszt’s specified order, which is that observed here. Liszt had already produced another fantasy on themes from Ernani which includes some similar material, but he declined to publish it (it appears in Liszt at the Opera VI) and reworked part of it into the piece recorded here. By calling these three pieces paraphrases, rather than fantasies or transcriptions, Liszt intends to convey the idea of taking a specific section of an opera, presenting it in highly pianistic terms whilst maintaining the general lines of the original. So the Ernani paraphrase confines itself to the finale of Act III (the King of Spain’s aria and chorus at Charlemagne’s tomb), the Trovatore paraphrase is upon the Act IV duet between Leonora and the condemned Manrico, with the accompanying chorus singing the Miserere (which is distantly derived from the opening of Allegri’s Miserere), and the justly famous Rigoletto paraphrase is simply a stunning re-creation of the quartet between Rigoletto, Gilda, the Duke and Maddalena in Act IV.

Liszt turned to Verdi’s Simon Boccanegra for his last completed operatic fantasy, Réminiscences de Boccanegra (always assuming that the rumoured fantasy on Mackenzie’s The Troubadour of 1886 does not come to light). Verdi, it will be remembered, produced a greatly revised version of his work in 1881, and Liszt was much impressed by this first taste of the late Verdi, and sought to popularize it in this fantasy which is, if anything, more avant-garde in its harmonies than the opera. Liszt makes free use of the orchestral introduction, the call to arms of the chorus in the finale to Act II and its orchestral variant at the beginning of Act III, and Boccanegra’s dying prayer and the finale to Act III, with an original coda based again on the orchestral prelude.

The Valse de Concert (titled ‘Valse à capriccio’ in the earlier version) was published by Liszt as the third of Trois caprices-valses, the others being the revised versions of the Valse mélancolique and the Valse de bravoure (both recorded in Volume 1 of this series), so it is clear that here as elsewhere he did not mind mixing original works with those based on other material. But this waltz really is an original piece, both because of the extraordinary variety which Liszt brings to his treatment of the Lucia waltz, and because of his happy combination of that theme with the Parisina waltz in invertible counterpoint.

The Valse infernale from Meyerbeer’s Robert le Diable was one of Liszt’s successi strepitosi in his years as a travelling virtuoso, and the title belies a more complicated genesis—in addition to the waltz, which is an orchestral firework with chorus in Act III, themes from the ballet music are also woven into this tour de force. The unpublished elaboration of Meyerbeer’s Cavatine dates from 1846, and is a bar-for-bar transcription of the Isabella’s ‘Robert, toi qui j’aime’ from Act IV. The piece ends on a dominant seventh and cannot be played by itself, but since Liszt has transposed the original up a semitone to F sharp major, it seems quite likely that he intended to add this beautifully contrasting piece of pianistic delicacy to the beginning of his famous recital warhorse, the Valse infernale, and it is given thus on this recording.

Liszt’s tribute to Gounod’s Roméo et Juliette is one of his most endearing fantasies. He really uses several motifs from the opera, all concerned with the partings of the lovers: the end of the balcony scene, the morning after the marriage, and the scene at Juliet’s tomb, taking quite small phrases to create what almost amounts to an original composition.

After Liszt, Ferenc Erkel (1810–1893) is the best-known nineteenth-century Hungarian composer. (His statue is to be found beside that of Liszt outside the Budapest Opera.) And of course Erkel really has a prior claim to that privilege, since his Hungarian operas were runaway successes in their day and are still performed in his homeland. Liszt is really in his element here, and uses quite a number of themes in a very Hungarian-Rhapsodic fantasy which he prepared for publication but which, for some reason, remains in manuscript.

The remaining pieces in this programme come from the operas of Wagner, whose long and storm-tossed friendship with Liszt is one of the most complex in musical history. Liszt’s enthusiasm and financial and practical support for the living composer he most revered is very well documented, as is the fact of Liszt’s being entrusted with producing and conducting the first performances of Lohengrin since Wagner was in exile on pain of death after his prominent support of the 1848 revolution. (Typically, Liszt received small thanks from Wagner for his efforts.) For some reason, Liszt issued the transcription of Elsa’s Bridal Procession with his flamboyant account of the ‘Entry of the Guests’ from Tannhäuser with which it scarcely belongs, so it is given here alongside all the other pieces Liszt wrote on themes from Lohengrin. Elsa’s Bridal Procession comes from the fourth scene of Act II as she is prepared for her wedding with Lohengrin, the Festspiel und Brautlied is the Prelude to Act III and the now-ubiquitous Bridal March, to which Liszt adds a shortened reprise of the Prelude. Elsa’s Dream—her vision of the knight—is found in the second scene of Act I, and Lohengrin’s Reproof forms part of the love music in the scene in the bridal chamber from Act III. Liszt’s faithful (and, in the case of the Prelude to Act III, sometimes treacherous-to-play) transcriptions furnish each of the quieter pieces with appropriate endings; Wagner’s original has them flow straight into ensuing transitions.

Rienzi was Wagner’s first success, but also the last opera he wrote where he did not control the synopsis and libretto completely. Liszt came to his piano work on the opera, Phantasiestück über Motive aus Rienzi, rather later, and it is his only example of a real operatic fantasy on Wagner (his other Wagnerian homages are really closer to literal transcriptions). Much of the material will be familiar from the overture, but the opening motif of the fantasy, which gives the work its subtitle, ‘Santo spirito cavaliere’, is part of the finale to Act III (Wagner has the motif sung to these Italian words, although the published score has the grammar and spelling somewhat fractured), and the splendid theme of Rienzi’s Prayer from Act V (also the main theme of the overture) follows. The dramatic contrast and impetus is then provided by the Call to Arms from the beginning of Act I. The whole piece is an excellent musico-dramatic entity which might be seen as a character portrait of the opera’s hero.

Cover artwork: Design for Act I of Wagner’s Lohengrin (on the shore of the Schelde) (1868) by Heinrich Döll