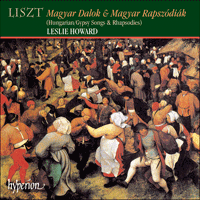 Before saluting the first real contribution of Liszt Ferenc to an essentially Hungarian literature, a word about titles and sources. It is customary to preserve the Hungarian titles of these works in order to avoid confusion with the well-known second cycle of Rapsodies hongroises. In the sources, numbers 1 to 11 are titled Magyar Dalok / Ungarische Nationalmelodien / Mélodies hongroises; numbers 12 to 17 are titled Magyar Rapszódiák / Ungarische Rhapsodien / Rapsodies hongroises; numbers 18 to 21 are just called Ungarische Rhapsodien, although No 20 was editorially entitled Rumänische Rhapsodie in the first edition of 1936. Pester Carneval was published separately in 1847 and, although not otherwise titled, clearly marks the conclusion of this first series of Hungarian Rhapsodies. Early editions of some of these pieces employed different titles (like Album d’un voyageur – Troisième année) which has added to the confusion, so in these notes the first series is always referred to as Magyar Dalok / Rapszódiák (‘Hungarian or Gypsy Songs / Rhapsodies’) and the second as Hungarian Rhapsodies / Rapsodies hongroises / Ungarische Rhapsodien. (In the first series, No 13 was also issued in a simplified version, which will appear on a later volume of these recordings.)

This is not the place, and a very lengthy and complicated piece of ethnomusicology would be called for, to account for the origins of every melody employed in these pieces. The job has been excellently done by several Hungarian scholars, and Liszt himself produced a remarkable book about the gypsies and their music in Hungary as a kind of preface to the Hungarian Rhapsodies – but that book has raised more questions than answers. For our present purposes we may note that Liszt made no hard and fast distinction between ‘genuine’ Hungarian folksong and other music which he heard the gypsies play; he was largely unaware of the names and texts of the songs he employed, and on occasion he was unaware that his chosen melody was actually the product of another Hungarian composer. But what remains clear is that Liszt’s avowed intention of celebrating the music of his native land is copiously accomplished in both sets of pieces. (In the scores of the Magyar Dalok / Rapszódiák, Liszt identifies only three melodies apart from the Rákóczi-Marsch.) Liszt probably collected the melodies for this first series during two trips to Hungary, the first around 1839/40 and the second about six years later. But there is no knowing how many of the themes might have been familiar to him from much earlier on.

The essential textual difference between the Magyar Dalok / Rapszódiák and the Rapsodies hongroises is one of texture: like the Album d’un voyageur or the Douze grandes études, which also date from Liszt’s years as a virtuoso pianist, there is a devil-may-care attitude towards the level of technical difficulty and elaborate figuration. In both sets he is concerned not only to preserve the melodies but also to convey the colour of the improvisation of the gypsy band, especially in his desire to imitate faithfully the cimbalom – that impossibly difficult instrument which gives the effect of a keyboard from the striking of strings with hammers held in the hand. But there is also a greater air of languid improvisation in the Magyar Dalok / Rapszódiák than obtains in the rather more concise Rhapsodies. Indeed, the very complexity of some of the cimbalom effects predicates a slower tempo than is appropriate for the leaner lines of the revisions. Viewing the twenty-two pieces as a whole, it is not clear why Liszt made such far-reaching structural alterations to the works when he adapted much of their material to form numbers 3 to 15 of the Rapsodies hongroises. Many interesting pieces were dropped, and whole themes or sections of other works were not retained in the later versions. In addition, themes were exchanged between pieces. But if we listen to the present set with an innocent ear, the selection and combination of themes seems more than adequate.

Magyar Dalok Nos 1 to 7 were published (in two books, the second of which just contained No 7) in 1840. No 1 is cast as a melody chanted, as it were, by a bass voice, with choral answers to each line. Then a second statement of the material presents the chant in treble octaves with deeper responses. The piece is in a very free rhythm without time signature. No 2 is a simple dance-song in 2/4, while No 3 is a lament with a florid variation. Nos 4 and 5 were also issued as Nos 2 and 1 of a triptych called Ungarische Nationalmelodien (on Volume 27 of the present recordings) and eventually provide the material for the first two sections of the sixth Hungarian Rhapsody. The first melody of No 6 is very similar to the lugubrious main theme of No 12, but the second theme is a jaunty contrast. After a cadenza which Liszt asks for but fails to supply (the present writer is responsible for deriving a cadenza from the second cadenza in the piece, which Liszt does provide), the first theme is varied, the second returns, with concluding cadenza and the first theme is varied again. This simple form was to expand greatly in the later numbers of the set. No 7 is a much larger work, and was later adapted to form the fourth Hungarian Rhapsody.

Magyar Dalok Nos 8 to 11 appeared in two volumes each of two pieces in 1843. No 8 is really a funeral march, while No 9 is the first example of the familiar verbunkos form of the later numbers and most of the Rapsodies hongroises: the slow lassú (or lassan as Liszt usually gives it) followed by the fast friss (or friska), in this case the first section being extremely florid and imitative of the cimbalom, and the second section being punctuated by a slower interlude. No 10 begins with a pair of themes which were later incorporated into the Hungarian Fantasy for piano and orchestra (which was otherwise derived from the fourteenth Hungarian Rhapsody), while the ‘Allegro vivace’ theme is very similar to the second theme of the Rákóczi March. No 11 begins with the intensely dolorous material which later engendered the third Hungarian Rhapsody, and it concludes with the same moto perpetuo theme which provided both the third of the Ungarische Nationalmelodien and the final section of the sixth Rhapsody.

Magyar Rapszódiák Nos 12 to 17 were issued in six volumes by 1847, and they are much larger works than the preceding numbers. It is extraordinary that the later, straightforward fifth Hungarian Rhapsody should be the progeny of the splendidly ornate No 12 of this set, the change of texture is so great. No 13 is one of Liszt’s seven surviving complete piano versions of the Rákóczi March, and was later diluted into the less ornamental fifteenth Rhapsody. The ornaments were the first casualty in the rewriting of No 14 into the eleventh Rhapsody, and the later version makes an unforeseen excursion into an ‘easier’ key for a more frenetic coda than the present rapid broken tenths in A major permit. No 15 similarly became the seventh Hungarian Rhapsody, but in so doing was much shortened and shorn of the excellent B major interlude towards the end. No 16 likewise is a more frighteningly difficult version of what would become the tenth Rhapsody, and No 17 is the original form of the much-admired thirteenth Hungarian Rhapsody, although here the slow section sports an extra variation with many tremolo effects, and the fast section contains a theme in cross-rhythm (of 3+3+2 semiquavers over a steady four-beat accompaniment) which was dropped for the later piece.

What we shall happily call Magyar Rapszódiák Nos 18 to 21 were ready for publication by the beginning of 1847 but never appeared, and the Pester Carneval (No 22) was printed in that year. (No 20 appeared in 1936, and the other three in the complete Russian edition of all twenty-two pieces in 1973.) No 18 contains much of the material, although with more variations and perhaps a tighter control over the turn of events, of the twelfth Hungarian Rhapsody – the latter also forgoes the black-note glissandi. No 19 was also much curtailed in its later transformation into the eighth Rhapsody. No 20, the so-called ‘Rumanian Rhapsody’, which has been very misleadingly called ‘Hungarian Rhapsody No 20’ by a number of ignorant writers, is a work of stunning harmonic originality which has been far too rarely rescued for public performance. The innocent little accompanimental figure at the beginning gives small hint of what is to come, and the main slow section was considerably diminished from its present grandeur when Liszt incorporated the melody for the slow section of the sixth Hungarian Rhapsody. Here it is wonderfully proud and elaborate. The change to G major with the ‘Hermannstädter’ introduces some nasty hand-splitting stretches before the harmonic wizardry of the ‘Walachische Melodie’ gives us the uneasy feeling that this music is more than half a century ahead of its time. The next composer who made such sounds was surely Bartók. Other themes crowd in, including a pair which crop up again in the twelfth Hungarian Rhapsody, but the ‘Walachische Melodie’ wins the day.

Much more familiar is No 21, which provided all the material bar the coda for the fourteenth Rhapsody and thence much of the Hungarian Fantasy. (The ‘Koltoi csárdás’ is the falling figure with the repeated notes and trills.) The coda of Pester Carneval eventually appeared transposed as the coda to the fourteenth Rhapsody, and the rest of the material became the ninth Hungarian Rhapsody, Le Carnaval de Pest, but again without many of the more hair-raising decorations of the present score. (And there is also a version for piano trio of this piece which closely follows this first version.)

As the foregoing notes imply, Liszt started a new series with Hungarian Rhapsody No 1 (which opens with a theme from the discarded Consolation No 3 in the first version), and No 2 (which contains entirely new material), and continued by deriving Nos 3 to 15 as described. Hungarian Rhapsodies Nos 16 to 19 are works of Liszt’s old age, and quite another story.