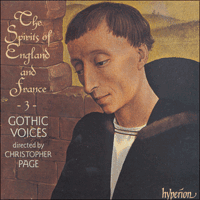 The Spirits of England & France, Vol. 3

Binchois and his contemporaries

In the last decades of the fourteenth century, composers working in the French tradition were sometimes musicians of profligate imagination. In addition to polyrhythms, extravagant melodic sequences and sudden dissonances, they sometimes created a sense of forward momentum in their compositions by sheer crowding of the texture, a legacy reaching back to the leading composer of the French Ars nova, Guillaume de Machaut (d1377). The music of Machaut, represented here by the exotic four-part ballade, Il m’est avis, was still being enjoyed in Italy around 1430 according to the theorist Ugolino of Orvieto, and even the most flamboyant aspects of late fourteenth-century style, fostered by Machaut’s successors, did not perish entirely in the 1400s. A composer might still return to them for a showpiece such as the ballade Laissiés ester. Here Gilet Velut, a choirman at Cambrai Cathedral from 1409 to 1411, laments the death of a composer (or singer). The grandiloquent poem, cast in ceremonious decasyllables, is set to music whose duple rhythms fight so determinedly against triple rhythms that the listener’s sense of contrapunctus is all but obliterated: in some passages we no longer sense that a tactical note-against-note counterpoint between cantus and tenor is the basic rationale of the piece. Such textures—designed to pack the moment with effects, overwhelming the ear and sweeping it onwards toward admiration—could still be regarded as a guarantee of a composer’s craftsmanship in the early fifteenth century as they had been three decades earlier. Velut uses polyrhythms to create his effect; the Gloria by Leonel Power (d1445) shows an English composer in his youth enjoying the French aesthetic of an almost furious texture crowded with events; to hear the five-part section which closes this Gloria is like plunging one’s head into a hive of bees.

The challenge facing French and Franco-Netherlandish composers between 1400 and 1430 was to find a lucid and mellifluous musical style, both for sacred and secular works, which could replace the idioms of the French tradition as they had become by the later fourteenth century. Many sacred works of the period 1400–1425 show with particular clarity how some musicians were severely challenged by the task of creating compositions with purposeful lower parts, and with melodious top parts, when they could not use the song forms of rondeau and ballade. The sacred works of Johannes de Lymburgia and Johannes Brassart, for example, often have lower voices that simply meander or bob up and down beneath top parts that wander from cadence to cadence. Johannes de Lymburgia’s Descendi in ortum meum is an outstanding exception. This setting of extracts from The Song of Songs (a text which often brought out the best in fifteenth-century composers) is notated in an uncharacteristically low register, cut loose from the F-c’ compass which is used for some of the weakest music of the decades after 1400.

The songs of Gilles Binchois (d1460), and the best songs of his contemporaries, such as Pierre Fontaine (J’ayme bien celui qui s’en va), reveal a wonderful melodic gift and an accomplished harmonic sense. Binchois was a singer in the Burgundian court chapel for much of his life, deriving additional income from various prebends held in absentia. As a composer of songs, Binchois is so versatile that it is difficult to know where one should look for his most characteristic voice. The songs chosen here, all in three parts, are perhaps particularly apt to show how Binchois touches the centre of the medieval love-lyric tradition in the High Style. We miss the point of Amoreux suy, for example, if we sense that there is a quality of anguish in the music that seems unsuited to the text (‘I am in love, and all my joy comes from hoping that your goodness may send me one single look’). Here, as in many of Binchois’ songs, the music has the power to suggest that everything which a lover experiences is touched with nostalgia—with a note of poignant and rueful memory—even as he experiences it. (If the most ‘classical’ and nostalgic of the twelfth-century trouvères, Gace Brulé, has a descendant amongst the polyphonists of the fifteenth century, it is surely Binchois.) The lover in Amoreux suy declares to his lady that she is his ‘happy memory now and for ever’: she is already in the realm of souvenir. So is the lady in Adieu mon amoreuse joye for she is addressed by the poet as ‘my most pleasing remembrance’: mon plus plaisant souvenir. Reading such poetry, we may feel that even if the famous Van Eyck portrait in the National Gallery does not show Binchois, the legend which appears there, Leal Souvenir, is perfect for him. A similar note of nostalgia, essential to the High-Style tradition of love-lyric from Gace Brulé onwards, is sounded in Adieu mon amoreuse joye, with its exquisitely formed cantus part, and perhaps also in Se la belle, a song which demands the kind of objective, almost disengaged performance which many songs of the earlier fifteenth century require. It is no wonder that the upper lines of these songs were sometimes performed by less innocens—by choirboys from the ducal chapel or other foundations; the purity and candour of a child’s voice singing songs of love, guaranteeing a style without affectation and an interpretation without irony, appealed to court listeners throughout the later Middle Ages. In some songs by Binchois, however, the tone is much too dark for any such performance. What can one say of Ay! doloureux? This song, surely one of the composer’s finest, is a protracted experience of despair and a marvel of sustained expression.

Many of Binchois’ songs are constructed with an extraordinary economy of means; they epitomize the decision of fifteenth-century musicians to control the expansive and profligate imagination of the decades before 1400. The beguiling melody of Amoreux suy, for example, is constructed almost entirely by moving stepwise through six notes, while the underlying harmony, cast in solemn A minor (to use modern concepts and terminology) is seasoned by C sharps in the cantus, where they appear as leading notes, and by more C sharps in the tenor and contratenor where they appear an octave lower, lingering to create sonorous A major triads. The effect is bitter-sweet, and perhaps related to one of Binchois’ most characteristic effects: a kind of delayed false relation. Until a new critical edition of Binchois songs is available it will be unwise to press such observations too far, but one song, Adieu mon amoreuse joye, has a highly conspicuous F/F sharp false relation, not softened by delay. The delayed examples are numerous, and are most striking perhaps in the early measures of Ay! doloureux, where the three voices begin in a low tessitura with numerous E flats made particularly conspicuous by an imitative figure which falls to the E flat through the augmented fourth A–G–E flat. When the declamation of the text begins, however, the cantus rises upwards to sound an extraordinarily poignant high E natural on the word 'doloureux'.

For a relatively short period, perhaps 1420 to 1440, music by English composers was influential on the Continent. It has often been said that Martin le Franc, in his poem Le Champion des Dames of about 1440, says Dufay and Binchois ‘have adopted the English manner’, or something similar. This is not quite correct, however, for Martin le Franc’s words are ‘[Dufay et Binchois] ont pris de la contenance Angloise’, where the ‘de’ is partitive; the meaning is that ‘[Dufay and Binchois] have adopted some of the English demeanour’. The quiet but utterly secure confidence of a piece such as John Dunstable’s Beata Dei genitrix, which also has an ascription (surely false) to Binchois, represents one source of influence upon the two great Frenchmen and their contemporaries, but only one, and not an influence that is likely to have exerted any sudden effect.

English music of the earlier fifteenth century will be explored in forthcoming volumes of The Spirits of England and France so we have confined our choice here to Dunstable’s Beata Dei genitrix, to two carols, and to Byttering’s exuberant and ceremonious motet En Katerina solennia/Virginalis concio/ SPONSUS AMAT SPONSUM. The two-part carol Exultavit cor in Domino is of special interest as a neglected Agincourt carol, much less well known than the famous Deo gracias Anglia, while the three-part carol Abide, I hope it be the best catches the tone of many fifteenth-century English carols and indeed of contemporary English civilization: it is morally earnest, technically assured but unambitious. Byttering’s En Katerina solennia/Virginalis concio/SPONSUS AMAT SPONSUM, probably composed significantly before the marriage of Henry V of England to Catherine of Valois in 1420, is a different matter. This three-part isoryhthmic motet has tremendous rhythmic zest. Here melody, as a composer of songs would have understood it, is not an issue; what count (in several senses of the word) are the exuberant cross rhythms, the often flamboyant declamation of the text, and the gradual acceleration of the tenor part.

Four songs are performed here by a trio of lutes, each one plucked with a quill plectrum. With the exception of a few cadential ornaments in the top part, these songs are played exactly as they stand in the ‘vocal’ sources. The extent to which fifteenth-century string players performed secular songs in this way is unknown; the rather different practice of encrusting an upper line with ornamental figuration and discarding the contratenor is well attested in the Faenza codex and elsewhere, and while this method has been given most attention by modern scholars—because it is a distinctively instrumental practice—there is no reason to suppose that it was the only one in use. Even when one sets out to play the notes ‘as they stand’, a new idiom of performance soon emerges, taking one away from the idioms of a vocal delivery, partly because plucked instruments of the fifteenth century will often welcome a much brisker tempo than might singers. The rhythmic intricacies of Binchois’ Qui veut mesdire, for example, a piece whose lower parts alternate between 6/8 and 3/4, make a fine vehicle, in our opinion, for a trio of medieval lutes where rhythmic gestures can so crisply be made.