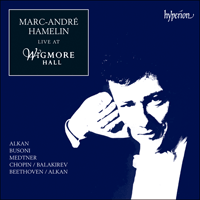 ‘Some of the most astonishing playing of the decade’ (BBC Music Magazine Top 1000 CDs Guide)
‘Titanic … awe-inspiring … truly phenomenal … a disc I cannot recommend too highly. Buy it!’ (Gramophone)
‘This is amongst the most spectacular piano issues of the decade’ (The Penguin Guide to Compact Discs)
‘A feast for lovers of titanic piano playing’ (American Record Guide)
‘The most dazzling piano disc of the year’ (The Guardian)
‘An exceptional disc by one of the keyboard phenomena of today … jaw dropping … an awesome display of virtuoso pianism’ (Classic CD)
‘Every Hamelin recording is an Event, and this is not to be missed by anyone who cares for genuinely transcendental playing’ (Fanfare, USA)
‘Superlatives fail me: just go out and buy it!’ (Hi-Fi News)
‘Terrifying virtuosity, scorching pianism, ineffable beauty and a mind equal to his fingers, Hamelin is one of 19th-century piano music's most meteoric talents ever to blaze the pianistic firmament’ (Soundscapes, Australia)
«Une fois de plus des pages extrêmement difficiles soulignent une maîtrise digitale impressionante» (Diapason, France)

The performances on this CD were recorded during Virtuoso Romantics, a series of concerts celebrating the Golden Age of piano playing, devised by Ates Orga and given by Marc-André Hamelin at Wigmore Hall, London, in June 1994, under the auspices of the Canadian High Commission and the Délégation Générale du Québec, London.

Ludwig van Beethoven (1770–1827)
(Piano Concerto No 3: Allegro con brio
transcribed by Charles-Valentin Alkan)
Alkan transcribed the first movement of Beethoven’s C minor Concerto in 1859. The vast cadenza he wrote for it, replacing Beethoven’s own, is extraordinary. The English Alkan scholar and pianist Ronald Smith calls it ‘seismic’. Bravely, Busoni programmed it in the ninth of his twelve Berlin orchestral concerts (Beethoven-Saal, 8 November 1906), though whether he played it himself is unclear. Smith claims he did. Edward J Dent, however, in Appendix III of his classic Busoni biography (1933), names Rudolph Ganz (to whom Ravel dedicated Scarbo) as ‘solo pianoforte’. In vintage Beethoven spirit, it has nothing to do with (Mozartean) cadential prolongation but everything to do with symphonic development, its eight sections expanding and projecting their source material through a theatrically weighted ‘continuum of far-flung tonal relationships’ (Smith). In the sense that Hummel’s or Britten’s Mozart cadenzas are unmistakably Hummelian, Brittenesque experiences, so Alkan’s Beethoven is unquestioningly Alkanesque: the personality, thrust and texture, the peculiar Franco-German synthesis, cannot be the work of anyone else. When the music blazes into C major fortissimo with a maggiore version of the Concerto’s opening subject thundered out in the left hand, counterpointed against the marcia finale of the Fifth Symphony a trinity of octaves away in the right, the effect is cataclysmic, the audacity belief-defying. Transcription, wrote Alkan in 1847, ‘lies in making everything heard, knowing which parts to bring out and how to do it, and also how they should be accompanied, lit up or left in the dark; an art, perhaps, with a richer future than might at first seem possible’.

Fryderyk Chopin (1810–1849)
(Piano Concerto No 1: Romanza
transcribed by Mily Alexeyevich Balakirev)
From boyhood, Balakirev (a good pianist—witness Islamey, the B flat minor Sonata) had been in love with Chopin’s music—a passion consummated in old age by an arrangement of one of the early mazurkas for strings (also a cappella chorus, 1904), by a re-orchestration and partial rewrite of the E minor Concerto, and by the compilation and scoring of a Suite on Pieces by Chopin for orchestra—these last two heard for the first time during the 1910 Chopin centenary celebrations in Moscow organised by Lyapunov. He also wrote a piano Impromptu on the themes of Chopin’s E flat minor and B major Preludes (1907, originally an improvisation), and in 1905, by effectively combining piano part with orchestral reduction, made the present dreamy solo transcription of the E minor Concerto’s slow movement.

Chopin completed the E minor between April and 21 August 1830, dedicating it to Friedrich Kalkbrenner, the German pianist/composer. Lyricism embodied, its Larghetto—a movement of cantabile pianism wherein we find Chopin translating the ordinary words of others (Hummel, the B minor Concerto) into a language poetically supple, at once delicately his own—is haunted by the image of a young soprano, Konstancja Gladkowska, whom Chopin had first met at the Warsaw Conservatoire in 1826: ‘It is not meant to be loud—it’s more of a romance, quiet, melancholic; it should give the impression of gazing tenderly at a place which brings to mind a thousand dear memories. It’s a sort of meditation in beautiful spring weather but by moonlight’ (letter to his friend Titus Woyciechowski, 15 May 1830).

Charles-Valentin Alkan (1813–1888)
(Trois Grandes Études, Op 76)
Alkan may have composed almost exclusively for the piano, but his music traverses (as Hans von Bülow recognized early on) a range of sonorities, a cosmos of textural spacings and extremes, a span of melodic dialogues and chordal balances as brilliantly lit and theatrically charged in their associative imagery as anything orchestral. More than once he aspires to plains extraordinarily Mahlerian in their vision of innocence and wisdom, of the beautiful and the celestial, the pastoral, the worldly, the imploring, the grand, the bold, the bizarre.

A Jovian manifesto of keyboard technique, resource and invention, the Trois Grandes Études, in spite of their late opus number, are an early creation. Contemporary with the first version of Liszt’s Études d’exécution transcendante d’après Paganini, they date from around 1838–40, well before either the compendious Grande Sonate or the exacting twenty-four Studies in major (Op 35) and minor (Op 39) keys. Ronald Smith claims that they ‘alone establish Alkan as the rival, if not indeed the peer, of Liszt as the joint architect of transcendental piano technique’. And in Vol II of his Alkan study (Kahn & Averill, 1987) he rightly draws attention to their extraordinary ‘single-handed challenge’ creating ‘a sense of strife; of grappling with odds. The writing of Bach, Paganini and Ysaÿe for unaccompanied strings’, he says, ‘provides the closest parallel. It also imposes momentary rubati and concentrates the right foot in a highly specialised way by training the ear to judge the precise tolerance of pedal-held sound compatible with clarity of texture’. From Liszt and Thalberg to Busoni and Sorabji, there is nothing like them in the repertory.

A magical world of sounds, cadences and dreams is the domain of the first Étude—structurally comprised of a prologue, a linking speeded-up variant, and a variation finale of ‘prancing counterpoints [that] are in themselves self-developing’ (Smith). Busoni played it in Berlin in 1908. Ravel, too, knew it.

Classically disciplined, romantically incandescent, and long (despite the present performance being around seven minutes shorter than Smith’s June 1987 Abbey Road recording), the massive second Étude takes the right hand to stratospheric summits of experience. No puissance course of more testing endurance can be imagined. Its sonic illusion, all-embracing register and dynamic scale, its awesome physical demand involving not just hand but body and feet, is not for the faint-hearted.

From jump steeplechase to flat sprint, from separate to united hands, is the quantum leap of the third Étude, a presto of terrifying muscular and psychological adjustment. If the date of 1838 in Ronald Smith’s text is correct one wonders if Chopin may have had its hurtling monodic piano and hairpinned vision in mind when he came to compose the finale of his ‘Funeral March’ Sonata a year later? Alkan was a close friend (in the 1840s becoming a next door neighbour in the Square d’Orléans) to whom Chopin subsequently passed on his pupils. And the Pole had been one of the undaunted piano players in Alkan’s eight-hand arrangement of Beethoven’s Seventh Symphony played at a concert in Paris on 3 March 1838. Such unsettling associations (consider how Liszt seems to have based the characterization and incident of his B minor Sonata on the ‘Quasi Faust’ movement of the Grande Sonate) riddle the Alkan enigma.

Ferruccio Busoni (1866–1924)
(Sonatina No 6)
Ferruccio Dante Michelangiolo Benvenuto Busoni was born in Empoli, near Florence. His father was an Italian clarinettist, his mother a pianist of German descent. As a child encouraged by Anton Rubinstein and written about by Hanslick, as an adoscelent befriended by Goldmark and Brahms, as a man admired by Sibelius and Reger, and as a teacher the inspiration of students like Agosti and Haskil, Harriet Cohen and Eduard Steuermann, Palmgren and Petri, he stood in his lifetime for the embodiment of the complete musician—an artist deeply rooted in the Teutonic, in Bach and Beethoven, in the wondrous majesty of that god of his farewell Berlin concerts, Mozart. Essentially self-taught as a pianist, without allegiance to any school or master, his concern was with the monumental, the titanic, the spiritually transcendental. Busoni was among the last of a line of Romantic pianist/composer/transcribers first glorified in the 1830s by Liszt and Thalberg. He used transcription, the music of others, to learn about composition. Bach and Mozart became like teachers in absentia. Profitably, he essayed Brahms, he gilded Liszt, he delighted in Bizet, he ‘interpreted’ Arnold Schoenberg. ‘In the virtuoso sense,’ he believed (November 1910), ‘transcriptions are suiting another’s ideas to the personality (weak or strong) of the transcriber … a transcription does not destroy the original … The performance of a work is also a transcription [of an original] … [A] musical work of art exists whole and intact before it has sounded and after the sound is finished. It is, at the same time, in and outside of Time’.

Thought of as early as 1917 and first played publicly by the composer in Wigmore Hall on 22 June 1920, the last of Busoni’s six Sonatinas—dedicated to Leonhard Tauber, old family friend and wealthy Parisian hotelier—was completed in March 1920. Busoni loved Paris, if not all its residents: ‘It is like a homecoming for me … to find life on the grand scale again … Here one is not asssessed according to one’s age or how much one spends, whether one is seen in the company of a lady or climbing into an automobile’ … ‘The golden light of these spring days has had an irresistible magic. The South vibrates in the air. And yet the indifferent faces of everybody one meets contrast unpleasantly with these palmy days. Truly: one could scarcely find less agreeable people anywhere’ (from letters to his pupil Philipp Jarnach, 10 & 22 March 1920).

Opening brightly in A major but closing darkly (and quietly) in the minor, the sixth Sonatina pays homage to Liszt—Busoni’s omega of the piano (to Bach’s alpha). Thematically, it is derived from (a) the opening chorus of Act III, Part ii, Allegro deciso; (b) Don José’s ‘Flower Song’, Act II, Andante con amore; (c) the Act I Habanera in its minor and major forms (here reversed), Allegretto tranquillo; and (d) the bustling ‘Arena’ Prelude to Act I Allegro ritenuto quasi Tromba (preceded by a related transition, Tempestoso). The last page, Andante visionario, plummeting a tonal world from F sharp (major/minor) to A minor, elegiacally combines the augmented-second exoticism of the gipsy Carmen’s ‘Fate’ motive with the chromatic descent of the Habanera.

Nikolai Medtner (1880–1951)
(Danza festiva, Op 38 No 3 [Forgotten Melodies, Vol 1])
Our anthology closes with an encore Marc-André Hamelin played at his second recital—Medtner’s gracefully encircling Danza festiva (Moscow, c1918–20): a joyful ‘visiting card’ of another age whose creator was to not only piano-roll (for Duo-Art and Welte Mignon) but also record (for Columbia in 1931 and HMV in 1936).