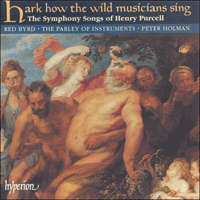 Hark how the wild musicians sing

The Symphony Songs of Henry Purcell

‘These are by far the best recordings of these wonderful works to have come my way … exactly as Purcell must have envisaged it’ (Classic CD)
‘"Recommended" is far too mild; this is an absolute must-have for anyone irretrievably bereft of a musical soul’ (Fanfare, USA)

There is no more neglected and misunderstood area of Henry Purcell's output than his eight secular works for voices, with two violins or recorders and continuo. The confusion starts with terminology. They are usually called `secular cantatas', but that is a peculiarly inappropriate term for music that is not particularly Italianate in style, and does not divide into passages of `recitative' and `aria'. In fact, they have more in common with court odes and verse anthems, and are best called `symphony songs' by analogy with `symphony anthem', the contemporary term for verse anthems with strings. The vogue for symphony songs began in Restoration Oxford. The Oxford composer Henry Bowman included four in a collection published in 1677, and John Blow wrote the first masterpiece of the genre, Awake, awake my lyre (recorded on Hyperion CDA66658), in Oxford at about the same time, possibly in memory of Christopher Gibbons, who died on 10 October 1676. Awake, awake my lyre and two subsequent symphony songs by Blow, Go, perjur'd man and Septimnius and Acme (also on CDA66658) formed the basis of a London symphony song repertory developed at court in the 1680s; Purcell modelled several of his own works on them.

All of Purcell's symphony songs survive in his autograph score, British Library RM 20.h.8. The autograph is of particular interest in that the symphony songs appear in a sequence of works that also includes some court odes. The odes can be dated exactly, and appear in chronological order, and so it looks as if Purcell copied the whole sequence either in order of composition or performance. The manuscript was probably assembled in the course of his court duties, and most, if not all, of its music was written for Whitehall, a point to which we will return. Thus it is possible to date the symphony songs with a fair amount of precision. How pleasant is this flowery plain, the unfinished We reap all the pleasures, Hark how the wild musicians sing and Hark, Damon, hark come after the ode The summer's absence unconcerned we bear (21 October 1682), and were presumably copied during the winter of 1682 and the spring of 1683—the text of Hark how the wild musicians sing refers to the spring. Similarly, See where she sits comes just before the ode From hardy climes (28 July 1683), while Oh! What a scene does entertain my sight and Soft notes and gently raised come between Laudate Ceciliam (22 November 1683) and From those serene and rapturous joys (?25 September 1684). If ever I more riches did desire is rather later: it comes between Ye tuneful Muses and Sound the trumpet, beat the drum, performed in October 1686 and 1687.

One work that does not seem to fit into this dating scheme is Oh! What a scene does entertain my sight, for it is significantly less mature than the others, and may be a very early work. Some of the vocal writing is rather clumsy, and the two-section symphony is like nothing else in Purcell: instead of the normal French type of overture, with a first section in dotted notes followed by a fugue, there are two dances, an allemande and a minuet, making a structure similar to the introductions to some of Matthew Locke's concerted works of the 1660s. In the surviving sources the symphony is only in two parts, treble and bass, but I have taken the liberty of adding a second violin part, partly because the music seems to demand it (extra imitative entries fit suspiciously easily at the beginning of each section of the minuet), and partly because all the other symphony songs have two trebles; it was not uncommon at the time for composers to write dance music in 'skeleton' form, expecting to add inner parts later.

Another work that may be slightly misplaced in the autograph is Hark, Damon hark. The other main source of Purcell's symphony songs, a manuscript in the British Library copied by a court scribe in the late 1680s, places it at the beginning of the sequence (a decision we have followed here), and this makes sense since the vocal writing is still relatively unsophisticated and the piece is a pastoral dialogue, an obsolete genre that Purcell only contributed to in extreme youth. One source preserves it without the instrumental sections, and it could be that they are later additions. The recorders add greatly to the humour of the piece, for their doleful minuet represents the music played by the shepherds to prove that 'Orpheus himself's not so merry as we'. How pleasant is this flowery plain, the first symphony song in the autograph, is certainly a much more sophisticated piece, with a fine symphony and a more complex relationship between the voices and the instruments. Like We reap all the pleasures (a fragment that breaks off in the autograph after a symphony and an initial chorus) and Soft notes and gently raised, it uses recorders to evoke an atmosphere of pastoral innocence. For this recording we have used a written-out continuo realisation, apparently for archlute, that appears in a contemporary hand squashed between the staves of the copy of the The Banquet of Music (1688) in the Bodleian Library. It probably has nothing to do with Purcell, but it gives us a fascinating insight into how elaborately one of his contemporaries played continuo.

As already mentioned, the text of Hark how the wild musicians sing is concerned with the spring, and this is also true of a surprising number of other symphony songs. Of course, the seasons had been a perennial topic for English pastoral poetry since Spenser's Shepheardes Calender, but it is possible that some of Purcell's symphony songs were written for informal court celebrations akin to the annual maying ceremonies of Henry VIII's court. The carpe diem theme of Hark how the wild musicians sing is certainly in tune with the ethos of Charles II's court; similarly, the world-weary longing to escape the hurly-burly of public life of How pleasant is this flowery plain was a fashionable theme of Rochester's and the other literary courtiers of the time.

The same theme is expounded, but on a more profound level, by Abraham Cowley in If ever I more riches did desire, lines taken from two of his Several Discourses by Way of Essays in Verse and Prose. As befits a text that deals in quasi-religious terms with moral questions—the futility of pride and ambition, the virtue of a humble, obscure life—the work is virtually a secular anthem, with the words and music in three of the five vocal sections given first to a solo voice, and then to the full ensemble—a procedure associated with anthems ever since the sixteenth century. The problem with a text that is essentially an Ode to Dullness is that it is hard to avoid setting it either to dull music, or to music that contradicts the text with unwarranted excitement. It is a measure of Purcell's greatness that he avoids both pitfalls: the work is sober and dignified, and yet the interest is easily maintained, in part because the textures are continually and imaginatively varied. Abraham Cowley (1618-1667) appealed greatly to serious-minded Restoration composers because he combined the lofty tone and extravagant images of the Metaphysicals, but developed a simple, bold and informal style. He was apparently Purcell's favourite poet: we have no fewer than fifteen Cowley settings among his non-dramatic songs.

The other Cowley setting recorded here is See where she sits, a setting of the poem 'Weeping' from The Mistresse. The poem is inspired by the poet's contemplation of a girl weeping; he imagines he sees Narcissus reflected in her watery eye, he compares her face to a hill watered by the stream of her tears, and he wonders why her tears do not appear as hail, so cold are they—and, presumably, her feelings towards him. Purcell responds to this remarkable series of dense and extravagant images with suitably dense and extravagant music. The scoring was evidently inspired by the version of Blow's Go, perjur'd man with violins, and is effectively a six-part motet, with three of the contrapuntal lines in the tutti sections taken by the instruments, producing wonderfully complex textures. Similarly, the work contains some of Purcell's most daring harmonic writing, with constant false relations, and an astonishing flatwards lunge at the words 'That she weeps tears so wondrous cold'. This is one of Purcell's greatest secular vocal works, yet it is virtually unknown, even to specialists.

The four pavans recorded here were probably written in the late 1670s, when Purcell was trying his hand at writing in a number of the traditional genres of English consort music. They form an orderly sequence in the only source, rising from G (or Gamut the lowest note of the scale in medieval theory), and they may have been part of a plan, never completed, to produce a set of pavans in every common key. They have the three repeated sections of Elizabethan and Jacobean pavans, but, like a number of Locke's, they are much shorter and are based on a crotchet rather than a minim beat, so they tend to sound more like solemn allemandes than true pavans.

A special feature of this recording is the use of two matched violins by William Baker, made in Oxford in 1683. Baker was principally a viol maker and used a number of typical viol-making techniques in these instruments, though he modelled them on violins by Maggini and his followers. They are among the very few seventeenth-century English violins in original condition, and we are most grateful to Peter Trevelyan for the opportunity to use them for this recording.