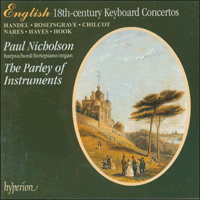 ‘A delightful project’ (The Times)

The keyboard concerto seems to have been invented independently by Handel and J S Bach. Handel wrote several experimental single-movement works for keyboard and orchestra in his youth (one of which begins this recording), but evidently only produced his first complete concerto in the early 1730s. Bach, meanwhile, had written his first experimental harpsichord concerto, Brandenburg No 5, around 1720. The two types of concerto, English and German, were quite different in conception, and remained so for much of the eighteenth century. German concertos were nearly always written for harpsichord and were modelled on the three-movement solo violin concertos of Vivaldi. Indeed, most of Bach’s harpsichord concertos are simple adaptations of violin concertos, with the solo violin part transcribed more or less literally for the right hand of the keyboard.

The Handelian keyboard concerto, by contrast, was usually written for the organ, though the harpsichord was always advertised in editions as an alternative. In England the organ had traditionally played a much more important role in secular music than in other countries, and large numbers of the English type of chamber organ—a small, usually single-keyboard instrument without pedals—were installed in concert rooms, theatres and private houses. The English keyboard concerto also differed from the Continental type in that it was modelled largely on the Corellian concerto grosso. For this reason Handel and his contemporaries rarely kept to the three-movement form and often felt free to include dances, sets of variations, fugues, or even improvisatory solo movements. Three-movement concertos became rather more common in the 1750s and ’60s, as did the use of the harpsichord, but the relationship between the keyboard and the orchestra continued to be less predictable than in Continental concertos. Sometimes they alternate, like the concertino and ripieno of a concerto grosso; sometimes the strings accompany a florid right-hand part; on occasion, as in the concertos by Hayes and Hook recorded here, the keyboard accompanies solos in the orchestra, and the relationship between the elements is virtually as complex and flexible as in a Mozart concerto.

This recording is, in effect, a miniature history of the English keyboard concerto from its origins to the 1770s. Indeed the first item, the orchestral version of Handel’s Chaconne in G major, is probably the earliest self-contained work for keyboard and orchestra. The work survives in five distinct versions, of which the earliest, recorded here for the first time, seems to date from Handel’s period in Hamburg (1703–06). It does not survive in orchestral score, but the keyboard part of the first variation is marked ‘Tutti’, and has a figured bass, while the last is marked ‘Tutti Stromenti’; Paul Nicholson has realized them for orchestra, as well as adding orchestral parts to the simple variation that comes immediately after the central G minor section. The Chaconne in G major circulated in England as a solo keyboard piece, and was twice published in that form, but Handel seems to have continued to use it as a concerto on occasion, for among his autographs in the Fitzwilliam Museum is a different version of the opening orchestral ritornello, apparently written around 1739.

Handel’s Concerto Movement in D minor, also recorded here for the first time, is better known as the first movement of the Concerto in D minor, Op 7 No 4. He wrote it in the late 1730s, possibly as the introduction to an oratorio. Indeed, it would make an excellent prelude to L’Allegro, il Penseroso ed il Moderato, first performed in February 1740, which has no overture. It matches the oratorio’s opening recitative in key (D minor), scoring (two bassoons and strings), and sombre mood. As originally conceived, the movement has two written-out organ parts, one solo and one ripieno. When Handel incorporated it into Op 7 No 4 he dispensed with the second organ part and shortened it by nine bars, removing the fine conclusion and somewhat weakening its effect.

Thomas Roseingrave’s D major Concerto is the only work on this disc to have been recorded before—as a harpsichord solo by Paul Nicholson on Hyperion CDA66564. This is the form in which the work survives, but it became clear to us while we were preparing that recording that it was a reduction of a lost orchestral concerto, and the matter was clinched when newspaper references came to light that referred to an ‘Organ Concerto with Trumpets and Kettle-drums’ performed by Roseingrave in Dublin on 8 March 1750. The work is in D major with fanfare-like tutti passages in the outer movements, and it was not hard to score them up for two trumpets, timpani and strings. Roseingrave was born in Winchester in 1688, the son of an organist and composer. He studied at Trinity College, Dublin, and in Venice, and established himself in London in the 1720s, becoming organist of St George’s Hanover Square in 1725. His later years were clouded by madness; he was forced to relinquish his post in 1744 and returned to Dublin around 1750, where he died in 1766. Roseingrave’s concerto is a vigorous Vivaldian work, but it is fairly primitive in style and structure and was probably composed long before 1750; indeed, it may be the earliest keyboard concerto by an English (or British) composer.

Thomas Chilcot seems to have spent his entire working life in Bath. He was born around 1700 and became organist of the abbey in 1728. He developed a busy teaching practice in the city, and was active in concerts there and in other West Country towns; his two sets of keyboard concertos, published in 1756 and 1765, were probably composed for them. In the preface to the 1765 set Chilcot praised Handel’s organ concertos—‘that delightful species of Harmony … which has been deservedly esteem’d and approv’d by the Judicious’—but in fact his own keyboard concertos are not very Handelian. They are written for harpsichord rather than organ, use the three-movement Vivaldi pattern, and contain a good deal of brilliant solo writing in a forward-looking style, partly indebted to Domenico Scarlatti whose harpsichord sonatas were much imitated by English composers in the 1740s and 1750s. Unfortunately the string parts of the Op 2 set do not survive, but Robin Langley has made a fine reconstruction of the charming A major Concerto which we have used for this recording.

James Nares spent his career as a church musician—at York until 1759 and then in the Chapel Royal—and he is best known today for the anthem The souls of the righteous. In fact, he wrote a good deal of secular music, including three sets of harpsichord lessons. The second set, Op 2, published in 1759, ends with a score of the concerted sonata recorded here. It belongs to a hybrid form, mid-way between the concerto and the accompanied sonata, that was cultivated by North of England composers such as Charles Avison, Thomas Ebdon and John Garth; it may therefore have been written before he came to London. Sonatas of this type are normally for keyboard with two violins and cello, but Nares clearly intended a second keyboard to supply a continuo part as well, for the bass part is sometimes figured in places when the solo part has rests or keeps the player fully occupied. Once again the idiom is derived in part from Domenico Scarlatti, but the work has many striking and individual ideas, such as the pizzicato passages in the first movement and the lavish ornamentation in the second.

Philip Hayes was another talented provincial composer. He was born in Oxford where his father was professor of music, a post he inherited in 1777. His six keyboard concertos were published in 1769 when he was living mainly in London and working as a Gentleman of the Chapel Royal. They are the first set by an Englishman to specify the piano, and though in general their solo parts work equally well on the other specified alternatives, the harpsichord and the organ, the light galant style of the A major Concerto benefits from the dynamic shading possible on the new instrument. It is fortunate that the string parts survive for this set, for Hayes uses them unusually imaginatively, even making a distinction between a solo quartet and the full band in the first movement. The Grazioso is a beautiful example of a type much favoured by English composers of the period: an aria-like movement in minuet rhythm with a hymn-like melody.

James Hook was born in Norwich in 1746 and came to London in the early 1760s, quickly becoming a prolific and successful composer in theatres, public concerts and pleasure gardens. He was the first English composer to write keyboard concertos in the full-blown galant style popularized in England by J C Bach’s Op 1 (1763) and Op 7 (1770). Hook published his Op 1 soon after, probably in 1771, and followed J C Bach in laying them out ‘for Harpsichord or Forte-Piano’ with parts for two violins and bass. However, there are a number of places in the outer movements of the Hook D major Concerto that seem to call for more varied colours, so I have provided parts for flutes and horns, using as a model the wind parts that survive in manuscript for some of J C Bach’s Op 7, or the ad libitum parts for flutes and horns in some of the Philip Hayes concertos. Hook was a notable early exponent of the piano and is known to have played a concerto on one in 1768. The earliest English pianos were small squares, but around 1770 Americus Backers began to make more powerful grands. The instrument used on this recording is a copy by Michael Cole of a Backers of 1772, now in Edinburgh. It is similar in size and construction to contemporary English harpsichords, is double-strung throughout, and has an experimental version of the action used on all subsequent English grand pianos; its sound is startlingly different from the familiar Viennese type, and from the heavier English instruments of the 1790s. The D major Concerto is an accomplished and expansive work, with a delightful slow movement in cavatina style with pizzicato accompaniment, and a rondo in the fashionable Scots idiom, with strong hints of bagpipes.