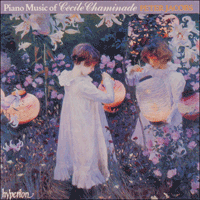 ‘Jacobs treats the music with affection, but also respect; he's served by an excellent recording’ (BBC Music Magazine Top 1000 CDs Guide)
‘Well worth the attention of those who enjoy piano music that seeks merely to soothe, charm and enchant’ (Gramophone)
‘In this well recorded, presented and imaginatively conceived issue we see again just how well Hyperion can produce the goods! It is a particular pleasure to see this issue on the market’ (CDReview)

Cécile Louise Stéphanie Chaminade was born in Paris in 1857 and died in Monte Carlo in 1944. Although she came from a non-musical family she was something of a prodigy as a pianist and composer – she began writing sacred music at the age of eight. It was Bizet who advised Chaminade’s parents that she deserved a sound musical education: as she was unable to enter the Conservatoire (which did not then admit women) she studied privately with several teachers. These included Le Couppey (for piano), Savard (for counterpoint, harmony and fugue); she also studied violin with the celebrated Belgian Martin Marsick, a pupil of Joachim, and composition with Benjamin Godard. Furthermore, she attained proficiency as a conductor, made her concert debut at the age of eighteen, toured widely, and became a well-known public figure, eventually receiving the Légion d’Honneur from the French government.

In the course of her long life Chaminade produced around 350 works including a comic opera, a ballet, a choral symphony entitled Les amazones, chamber and orchestral music, and about a hundred songs. But the area in which she excelled and was most productive was the short lyric piano piece, and many of these became very popular, bringing her considerable commercial success and fame in France, Britain and the USA. They fed a market of domestic and salon music-making which had little use for profundity or complexity of thought but responded to graceful melody, simple forms, clear textures and dextrous, gratefully written exploitation of the medium: music, with its ‘easy velocity’, often designed to sound harder to play than it really is.

As a result, for long decades Chaminade’s reputation has been that of a mere purveyor of pleasant but deeply unimportant salon music: an ephemeral figure, virtually beneath musicological notice. (Eaglefield Hull’s admirably comprehensive Dictionary of Modern Music and Musicians of 1925 ignores her very existence; it is symptomatic of the same attitude that she rates but one passing mention in Martin Cooper’s classic volume on French music from the death of Berlioz to the death of Fauré – as ‘charming’ and ‘fashionable’ – and that The New Grove takes over unaltered and unquestioned the brief and supercilious entry from the previous edition of Grove’s Dictionary.)

But with the increasing attention being focussed in recent years upon the distinct achievements of women composers, and with belated respect thus accruing to such signally gifted figures as Fanny Mendelssohn, Clara Schumann, Lili Boulanger, Rebecca Clarke and Ruth Crawford, the reputation of Chaminade almost certainly calls out for upward revision. After all, as Norman Demuth perceptively remarks in his study of French piano music – which, if he cannot quite bring himself to intrude her into his main narrative, at least gives Chaminade a little ‘interlude’ chapter to herself – she was ‘nearly a genius in that she knew exactly what, and how, to write for pianists of moderate ability … we wish every writer for the piano had her innate gifts and could be equally musicianly in their own ways’. Demuth also stresses the fact that Chaminade’s music gracefully complements that of Fauré: while she may lack (or scruple to attempt) the latter’s innate profundity, she often matches him in elegance, melodic beauty and lyrical cantabile. It is hardly a criticism that she is usually easier to play. The present anthology of pieces chosen from different periods of Chaminade’s career gives a good indication of her strengths and her characteristic manners.

Already in an early work, Chaconne, Op 8, charm vies with an absolutely assured technique. Not that this is any real sense a strict invention on a ground bass, but rather an elegantly generalized evocation of Baroque – the first of several essays in playful archaism, with a few unexpected modulations that anticipate the witty incongruities of Prokofiev’s ‘Classical’ symphony. Or, rather, the cheerful stylistic promiscuity of Poulenc – as becomes clear in Autrefois, a maturer essay in mock-Baroque (this is No 4 of Chaminade’s Pièces humoristiques, Op 87, published in 1897). Here a gentle country-dance tune, with lyrical decoration, contrasts with a brilliant toccata-like middle section featuring some sparkling arpeggio writing.

Redolent of quite another age is Callirhoë, an ‘Air de Ballet’ presumably extracted from Chaminade’s orchestral ballet of the same name. I have been unable to establish whether the scenario relates to the mythological Callirhoë, the wife of Alcmaeon, whose lover Zeus caused her infant sons to grow instantly into men to avenge her husband’s murder; or Callirhoë the virgin of Calydon, who was vainly wooed by a Priest of Dionysus. Nor does it matter: the piano piece clearly has nothing to do with Ancient Greece. This is a giddy little polka in G major, not far removed from the atmosphere of the Folies bergères – yet also an instance of exploratory pianism, taking over Liszt’s notational innovation of two notes on a single bifurcated stem to accommodate the giggling crushed semitones which so naughtily spice up the harmony.

An altogether more poetic and contemplative mood is struck by Solitude, the second of Chaminade’s Op 127 Poèmes provençales: a serenely singing piece with a gently pulsing chordal accompaniment, though the prevalence of two-bar phrases perhaps robs its principal melody of real distinction. Similar in technique, but more impressive, is the Romance in D of 1910, whose syncopated chordal accompaniment more effectively sustains the tension of a very Fauréan, ambiguously troubled main idea.

L’Ondine, Op 101, published in 1900, is a little tone-picture of the eponymous water nymph – and of course very unlike Ravel’s tour de force of tenebrous virtuosity in Gaspard de la nuit. Here an enchanting tune is borne upon a rippling accompaniment which develops into a middle section of glittering, veloce liquid arpeggios, whose watery motion eventually forms the coda of the piece.

Two pieces follow from Chaminade’s first set of Études de concert, Op 35. The Scherzo in C major is a cheerful invention in quick waltz time with occasional tinkling musical-box effects and some touches of Hungarian gypsy colour. Its companion Automne, however, is a more exalted utterance. Not undeservedly, this spacious study in D flat is Chaminade’s most famous piece. Essentially this is a full-blown example of the Romantic étude in the Chopin–Liszt tradition, but viewed from a perspective that includes the early Fauré nocturnes. The songful main theme, supported by a full yet delicate keyboard texture, evokes autumnal peace and melancholy, while stormy weather invades the con fuoco central section which rises to heights of fierce Lisztian passion before subsiding once more.

Chaminade’s Thème varié, Op 89 in A major, is a short, informal set of variations – essentially decorative elaborations of a lilting, mock-classical tune. There are chiming effects, and two A minor variations with sonorous arpeggio writing. At the end the arpeggio decoration entwines with a partial reprise of the theme. Even simpler is the Sérénade in D, Op 29: an innocent tune treated to some deft modulations to vary its even, untroubled flow.

Two items come from the Romances sans paroles, Op 76, published in 1893. Souvenance (‘Remembrance’) is a poised B minor song of elegant melancholy and disquiet. Its E major companion Élévation (‘Exaltation’) is, on the other hand, the kind of piece which gave Chaminade a reputation as a purveyor of overwhelming sentimentality: Demuth calls it ‘dreadful’. Certain kinds of performance might indeed conjure only sententious rhetoric from its richly harmonized and somewhat religiose main idea, but interpreted with warmth and restraint the piece emerges as a glowing example of innocent late-Romantic idealism.

Two pieces from the comparatively late second set of Études de concert display Chaminade’s skilful despatch of stylistic and technical challenges. The Étude mélodique in G flat, Op 118, is charmingly songful in rather Schumannesque vein, much of the interest generated by a rippling inner voice in triplets – but its scope enlarges as it proceeds and rises to an unexpectedly powerful climactic episode in F sharp minor. The Étude pathétique in B minor, Op 124, is, as its title implies, a much more agitated affair: impassioned, vehement, even tragic, chromatically inflected (and afflicted), with grand gestures and dramatic alternations of tempo. But as a piece of rhodomontade it is carried off with fine style.

An altogether simpler inspiration is La lisonjera (‘The flatterer’), a kind of witty serenade in D flat. Its capricious melody displays some Spanish turns of phrase, and indeed the work makes an agreeable parallel to Debussy’s La sérénade interrompue.

This collection includes two contrasting waltzes, both in A major (which seems to have been one of Chaminade’s favourite keys) – the second and seventh that she published. The Deuxième valse, Op 77, is salon music at its best – a delicately lilting fast waltz, very redolent of Chopin, almost breathless as it swirls around the ballroom and wittily self-intoxicated with its own melodic gaiety. The later Valse romantique, Op 115, is by contrast a large-scale concert waltz with a richer harmonic palette and a vigorous elegance that suggests Chabrier (compare his own Valses romantiques for piano duet). After an agitated A minor middle section, the waltz becomes steadily more brilliant and virtuosic as it approaches its end.

The sway of boats in Pêcheurs de nuit (‘Fishermen at night’, another of the Poèmes provençales) evokes, as is apposite, a species of barcarolle. This is one of Chaminade’s finest pieces. Its sinuous E minor main tune accumulates a sinister melancholy which makes one wonder if she knew the barcarolles of Alkan, while powerful deep tolling E’s suggest the beat of distant surf. A more confident and heroic middle section in B major becomes steadily more dramatic, and after the return of the opening idea the waters finally close over it in swirling arpeggio figuration.

Finally, Chaminade’s Étude scholastique, Op 139, published in 1910, re-visits the archaic manner of the early Chaconne from a viewpoint of absolute maturity. ‘Scholastique’ does not mean academic, but her vigorous free invention in the Baroque manner takes a dig at the kind of strict stylistic imitation required by the conservatoires. Actually the piece is a brilliant toccata in A minor. The time signature is 2/4, but the fast triplets give it the feeling of a gigue. A broad, richly chordal subsidiary theme in C major hints at Brahmsian, even Elgarian models – but this is soon wreathed in very un-Brahmsian arpeggio writing. When this idea eventually returns it is in the tonic major, and in A major, with a fine flourish, the Étude scholastique concludes – a convincing demonstration of the powers of a composer who, within her chosen sphere, attained a frequent and diverting excellence.