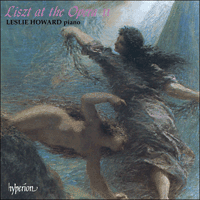 The complete music for solo piano, Vol. 17 - Liszt at the Opera II

‘There are riches galore here … Howard, as with every volume so far, brings to the recording studio the excitement of a live performance while never neglecting or unduly emphasising the poetry and sentiment’ (CDReview)

In the notes to the first volume of Liszt at the Opera it was observed that the species to which Liszt contributed so fulsomely has not always been regarded with great favour, although, considering the art which Liszt brings to all of his operatic piano works, the criticisms in his case seem churlish. And, as so often with Liszt, the whole category of works used to be condemned on the basis of a scant acquaintance with one or two of the pieces. Things appear to be improving somewhat, and the present writer can at least claim to have given an all—‘Liszt at the Opera’ recital programme in many different countries without risk to health or reputation. The works in this second gathering, like the first, show many different ways of treating the original materials and range over a good many years of Liszt’s creative life.

The pieces based on Meyerbeer’s Le Prophète represent Liszt’s largest work in this genre. Even without the ‘Ad nos’, the Illustrations are enormous, and manage to include many aspects of the opera. Le Prophète was a tremendous success in its day and, although there have been recent revivals, it is really necessary to try and think of the work as it must have seemed to Meyerbeer’s contemporaries to imagine (understand?) why Liszt should have taken quite such an interest in it. But no apologies are required for the attractive and sensible skills of Meyerbeer’s composition, and many music lovers will recall the successo strepitoso of Constant Lambert’s ballet Les Patineurs culled from the same source. And the Coronation March, in various arrangements, was a regular drawing-room and organ loft companion for half a century or more.

The first Illustration is of the medley paraphrase variety. It may, of course, be performed independently of its fellows, but the pieces work very well as a contrasted set, and there is a certain amount of thematic cross-referencing.

Although Liszt’s subtitle accounts for the main material of the piece, the movement is seriously infiltrated by the Coronation March which appears, ghostlike, at the outset, and whose trio section dominates the peroration. The Prière is rather fragmented but introduces the theme ‘Ad nos’ in Meyerbeer’s original compound time (cf. the ‘Ad nos’ Fantasy and Fugue). Quite the most impressive passage is the fanfare which leads from the Hymne to the Marche du sacre, which is itself defiantly four-square.

The mighty ‘Skaters’ scherzo used to be a regular recital war-horse for all players of sufficient stamina from Busoni to Kentner and is the most tightly-constructed piece of the set. Liszt’s sliding effects far exceed the predictable use of glissando and, as everywhere in the collection, his subtle improvements to Meyerbeer’s harmonies, his reorganisation of the original tonalities in order to make a symphonic key structure, and his hinting at one theme whilst exploring another make these pieces superior to many of their kind.

The third piece begins as an engaging variation upon pastoral material, but works itself to a feverish pace before the ‘Ad nos’ theme ushers in the ‘Call to Arms’ march, which itself becomes frenetic and suddenly and brilliantly resolves into the Orgie and a headlong conclusion.

Although the great Ad nos, ad salutarem undam Fantasy and Fugue was not originally issued with the Illustrations, Liszt referred to the work in his correspondence as the ‘Illustration No 4’ (and it is so designated in the Searle/Winklhofer catalogue) and so it seems right to include it here, the more so since its theme is finally given the development it deserves—Liszt having metrically reorganised it in a chorale-like 4/4 time meanwhile. (There is no question of this melody being a church chorale, despite the errors of many commentators. It is certainly Meyerbeer’s melody.) Liszt had the work published in a full score which combines the versions for organ or pedal piano with the version for piano, four hands. He never made a version of it for solo piano. Busoni did, however, make a very free solo arrangement which, for all its intrinsic merit, does not impress as a work of Liszt so much as a transcription by Busoni, so, with best respects to the Italian master, Liszt’s own version for four hands has been preferred for the present recording. The score of the work shows how carefully Liszt sought to make an effective duet version, for whilst the secondo part often consists of an octave doubling or trebling of the organ pedal line, there are many passages in which all the material is redistributed about the four hands—so the composite score often runs to seven staves. It would have been an exciting challenge to record the pedal piano version, but it was not possible to find an instrument in sufficiently good condition to cope with not just this work, but, for the sake of a continuity of sound quality, with all the Prophète pieces. Furthermore, the duet version, by its reinforced texture, is better able to encompass the grandeur of the far better known organ version than the pedal piano version could ever hope to do. On a personal note, it is a marvellous and rare chance to collaborate with Geoffrey Parsons, whose playing is all too seldom encountered senza voce.

Unlike the other three Illustrations, the ‘Ad nos’ Fantasy and Fugue is really a completely original work of Liszt’s but based on Meyerbeer’s theme. Meyerbeer was so impressed with it that he seriously suggested its use as an overture to the opera—which would certainly make it the longest ever overture by a hefty margin. It would be unkind but accurate to add that this music is also of a much richer worth than anything in Meyerbeer’s score. Liszt treats the theme as something to be discovered in the course of the work, and the whole Fantasy deals with fragments of the theme at a time. The melody finally emerges at the beginning of the central Adagio, which is full of the most gracious harmonic inspiration. A dramatic interruption leads to the Fugue which, although conscientiously worked out to begin with, impatiently transforms itself into a freer contrapuntal fantasy which culminates in the grandest possible statement of the newly-harmonised theme. The whole piece is one of Liszt’s finest, and has properly been comp ared in its breadth and achievement with the Sonata in B minor.

Liszt’s works on themes from Donizetti’s operas have experienced an uneven fate: the Lucia Sextet has never left the repertoire, the Lucia et Parisina Waltz turns up from time to time, as does the Lucia March and Cavatina. The horrendously difficult Lucrezia Borgia pieces are admired at a safe distance, while the trenchant Dom Sébastien Funeral March—which draws in several other themes from the opera and certainly lightens in atmosphere before the end—is a rarity. The Favorite transcription, which appears to date from shortly after the opera’s première, has remained in manuscript and will appear in the facsimile of a handwritten copy in the 1992 Liszt Society Journal. We know nothing of the background to the piece, but it must rank among the most simple and beautiful elaborations of a great melody. (The work does not appear in the present edition of the Searle/Winklhofer catalogue, but the present writer has assigned it S400a for convenience, pending the publication of a new catalogue.)

Spohr’s opera Zemire und Azor had already been unkindly relegated to history when Liszt made his simple transcription of its best-loved romance, and so the piano arrangement is often catalogued amongst Liszt’s song transcriptions. Many a collector of 78rpm gramophone records or transfers therefrom will be familiar with Die Rose as ‘Rose softly blooming’—which was in its day a ubiquitous parlour song.

‘Incredible One’ is only one of dozens of adulatory salutations to be found in Liszt’s letters to Wagner, and Liszt’s devotion to Wagner and his music is a very special case. The intertwining of their lives and works ought yet to be the subject of a much more thorough investigation than has been seen. Suffice it to say under the present heading that Liszt devoted his purse and his art to Wagner’s cause, and the Wagner transcriptions are the largest group of Liszt’s piano works on operatic themes. If we except introductions and codas, most of the pieces in the present collection are straightforward transcriptions of famous passages from the Wagner music-dramas, but it is the very essence of Liszt’s homage that we see in the introductions and codas, where he is able to offer a most personal reflection. In the Tannhäuser pieces the codas supply endings which the opera avoids in the interest of continuity—and the coda to the song to the evening star is a gem. The Spinning Chorus from the Dutchman is carried away on a web of fancy, whilst Senta’s Ballad goes to a resplendent affirmation. Strangely, Liszt wrote only one piece based on The Ring, perhaps because his student Tausig had already done such a marvellous job with many famous passages of the score, restricting himself to the transition between the first two scenes of Rheingold and Wotan’s ensuing hymn to the newly-built Valhalla. But Liszt looks ahead to the end of the opera and the appearance of the triumphal sword motif which heralds the coming of the new age of the Volsungs.

The Parsifal transcription is surely the strangest. Liszt does not really follow Wagner at all closely. It is as if he were recalling the march in a dream. Liszt’s harmony is a lot less comforting than Wagner’s, and there is no positive conclusion. As in so many of Liszt’s later works, there remains only a desolate silence.

These days only Faust remains in the standard repertoire, and only Roméo et Juliette waits in the wings; the rest of the once-mighty Gounod’s operas gather dust—just one of many wrongs unlikely to be righted in the present stringent financial climate. And Liszt’s felicitous transcription of the Cradle Song from The Queen of Sheba has shared the same fate, without the financial excuse.

Liszt’s passionate desire for a Hungarian musical culture to be proudly exported is a refrain throughout h is correspondence, and his support for Hungarian musical education and many Hungarian composers is legion. He was delighted when Mosonyi produced the first of his works specifically entitled ‘Hungarian Opera’, and this colourful piece on themes from Pretty Helen is the resultant tribute to a composer whose neglect outside Hungary has nevertheless endured.