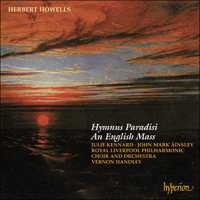 Cover artwork: Sunset at sea after a storm (detail) by Francis Danby (1793-1861)
Reproduced by permission of the City of Bristol Museum and Art Gallery

Although composed between 1936 and 1938, Hymnus Paradisi, Herbert Howells’s acknowledged masterwork, lay hidden from the public for over a decade before its first performance at the Gloucester Three Choirs Festival in 1950 when it was conducted by its composer. Howells had showed the work to Herbert Sumsion, the organist of Gloucester Cathedral, who in turn passed it to Vaughan Williams. Had it not been for the latter’s insistence that it must be performed, Hymnus Paradisi might have remained unknown for many more years. The title of the work was Sumsion’s suggestion. Howells had kept the work private since he had written it as a purely personal document. It had been ‘called into being much earlier’, he wrote, as a response to the sudden death, at the age of nine, of his only son Michael in 1935. At the time his grief was so overwhelming that he recalled he could neither work nor think; only when his daughter enquired whether writing music would help him come to terms with his grief did he realize that this would provide the succour he needed. Later, when writing about Hymnus Paradisi, he recalled that such a loss, ‘essentially profound and, in its very nature, beyond argument, might naturally impel a composer, after a time, to seek release and consolation in language and terms most personal to him. Music may have the power beyond any other medium to offer that relief and comfort. It did so in my case.’

Two other works composed at this time were similarly part of the cathartic process for Howells, the a cappella Requiem, which shares many ideas in common with Hymnus Paradisi and was also withheld for many years, and the slow movement of the Concerto for strings, an elegy to the memory of both Michael and Elgar who had died the year before. Howells’s orignal idea for the work that was to become Hymnus Paradisi was a setting, in five movements, of a poem by Prudentius (348–c405), Hymnus circa exsequias defuncti. A fragment of this conception remains only in a quotation that heads the score after the dedication to Michael: ‘Nunc suscipe, terra, fovendum, gremioque hunc concipe molli.’ In Helen Wadell’s translation it reads, ‘Take him, earth, for cherishing’, words that Howells was so memorably to set in 1963 in his motet on the death of President Kennedy. Howells uses two sentences of the Latin Mass to open and close the work, and the other texts are respectively Psalm 23, Psalm 121, the Burial Service from the Book of Common Prayer, and a passage from the medieval Salisbury Diurnal.

Hymnus Paradisi is scored for soprano and tenor soloists, chorus and orchestra, but the chorus is the driving force in its momentum. It is divided into two parts: the first, predominantly contemplative, links the opening three movements, whilst the second comprises separate movements, two animated flanking a further meditative one. Spiritually and emotionally the work is an intercession for both the quick and the dead. It seeks assurance that the departed are at peace, but also understanding and solace for the bereaved. The phrase ‘Et lux perpetua luceat eis’, sung first by the chorus in ‘Requiem aeternam’, and particularly the word ‘light’, symbolizes the quest for illumination which is the crux of the work.

An intense, brooding Preludio introduces three principal themes. The first two are heard in the opening bars on lower and upper strings respectively, whilst the third is played by solo oboe. The music quickly becomes troubled and anguished; only once, for a brief moment, at the cadence of the fortissimo outburst, is there a gleam of comfort. Tenderly the chorus take up the Preludio’s first theme as they intone ‘Requiem aeternam’. With the entry of the soprano, heavenly light is shed as she sings ‘Et lux perpetua luceat eis’ accompanied by delicate scoring of harp, celeste and bassoon. The same words are heard again at the movement’s climax in a massive outburst of hope.

An orchestral link reverts to the sombre mood of the Preludio; it is punctuated by sorrow-laden chords before muted violins bring consolation in the guise of a peaceful phrase, which is the fourth principal theme of the work. Soprano and tenor soloists take comfort in the words of the 23rd Psalm, ‘The Lord is my shepherd’. The dangers present in ‘the valley of the shadow of death’ are portrayed vividly in a twisting, anxious melodie line, before soprano and chorus find reassurance as the ‘house of the Lord’ is evoked in limpid music. The tenor reinforces these sentiments ending his line ‘therefore can I lack nothing’ with a cadence of sheer magic, so characteristic of the composer.

Heaven and earth are juxtaposed in a dual setting of the Sanctus and Psalm 121 as the psalmist looks heavenward for aid. The sumptuous choral and orchestral writing is ablaze with light, showing Howells a master of choral-orchestral polyphony as the melodies soar upwards like the vaulting of a gothic cathedral. Instances are the exultant, melismatic outburst of ‘Sanctus’ by the soloists riding high above the chorus at the first climax, and the surge of unison choral sound heard, march-like, at the declamation of ‘He will not suffer thy foot to be moved’. But perhaps most effective of all is the movement’s conclusion, where alongside the return of the Preludio’s themes, the shimmering glory of the heavenly host fades into the ether. Following this, ‘I heard a voice from heaven’, with lines from the Burial Service, is like a lulling benediction, as the tenor’s line is underpinned by the choir’s chanting affirmation of ‘blessed are the dead’.

For the ending of the work, Howells recalled that ‘I had to summon, if I could, an even more intense degree of the work’s pervasive radience’. For some time his search for suitable words proved fruitless, until Sir Thomas Armstrong suggested ‘Holy is the one true light’, the rapt words from the medieval Salisbury Diurnal that are also found in G H Palmer’s translation at the end of Robert Bridges’s anthology The Spirit of Man. Here is the resolution to the answers sought in the work. Over a long-held pedal point, Howells creates a surging crescendo of intensity which is released as radiance floods in. Twice more the music swells in a suffusion of heavenly light, until finally, in the luminous alleluias of the closing pages, consolation for the living and peace for the dead are assured.

An English Mass was written for Harold Darke and the St Michael Singers in 1955. Darke (1888–1976) was a leading organist and choirmaster of his time who was organist of St Michael’s, Cornhill, London, for fifty years from 1916. He founded the St Michael Singers with whom he became a leading proponent in the revival of English seventeenth-century polyphonic music as well as championing such composers as Parry and Vaughan Williams. The title refers to the use (apart from the Kyrie) of English words for the setting of the Mass, as well as to the sequence of movements reflecting the Anglican Communion service with the Gloria placed last. Although Howells scored it for chorus, organ and strings, he also suggested optional instrumental additions of flute, oboe, timpani and harp which have been included on this recording.

The vocal scoring is particularly effective with solo voices, semi-chorus and tutti all being used to create a variety of textures and colours both between and within movements. Darke and Howells shared an enthusiasm for seventeenth-century music; throughout his life Howells felt that he ‘somehow belonged to the Tudor period’ and his rapport with the music of that time is particularly evident in this work although transmuted into Howells’s own characteristic voice. Throughout, Howells creates vivid musical images to correspond with the text and compared to Hymnus where the mood is brooding and questioning, the music of the Mass is rock sure in its faith.

The Kyrie commences pianissimo in spare two-part writing and pained semitone clashes whose discomfort is quelled by the reassuring peace of the voices entering in imitation. In richer harmonic fields the opening idea is repeated and varied to culminate in a sonorous statement, before the chorus lines fall away to silence.

After the solo bass’s declaration of faith the orchestra and chorus thunder in with their response at the opening of the Creed. This is the longest section of the Mass, and its various parts are prefaced by brief orchestral links which create the ambience for the words that follow. One of the most striking musical images occurs at the words ‘And was crucified also for us’, where the texture is pared down to a semi-chorus and a solo cello has a writhing phrase as an apt reflection of the agony of the Cross. The final section, beginning with a ravishing melody for a solo soprano at ‘And I look for the resurrection of the dead’, has the character of a coda to the movement and builds to a thrilling D major ‘Amen’ of affirmation.

By contrast, the brief ‘Sursum corda’ is a still moment of repose; a dialogue between the chant of the solo bass and the chorale-like response of the unaccompanied semi-chorus. It merges attacca into the short Sanctus which begins with a mystical melodic phrase on the oboe. In music of refined beauty the smooth, long-breathed vocal lines slowly rise to two elated climaxes exhorting the ‘Lord God of hosts’. (Particularly effective is the moment when the orchestra cuts out to emphasize the word ‘glory’.) The movement ends with a hushed sotto voce echo of praise.

The Benedictus is marked by sinewy melodies as heard in the flute solo which frames the movement. A duet for soprano and alto soloists is offset against the semi-chorus and there is a glorious change of key at the entry of the full choir at the word ‘Hosanna’. The movement is linked to the Agnus Dei which is centred around a phrase of heart-rending sadness heard in two-part counterpoint setting the words ‘O Lamb of God’. Its threefold supplication exploits several textures including solo quartet for the first time, and ends on a plea for peace.

Much of the Gloria is another of Howells’s ecstatic outbursts of praise. It opens dramatically and reaches a huge outburst on the orchestra before the tempo, and texture, change for a more reflective section at ‘O Lord, the only-begotten Son, Jesu Christ’. As the tempo quickens again, the music drives to a climax with memorable ‘word painting’ at ‘have mercy upon us’. At the end melting solos for soprano and tenor lead quietly to a hushed ‘Amen’.

Cover artwork: Sunset at sea after a storm (detail) by Francis Danby (1793-1861)
Reproduced by permission of the City of Bristol Museum and Art Gallery