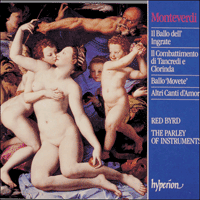 ‘At the pinnacle of current Monteverdi singing on records’ (Fanfare, USA)
‘One of the most perfect CDs ever made. Unsurpassable: glorious music, superb performances and hair-raising sound. The performers, engineers, and Hyperion Records deserve the highest praise’ (Classical Express)

On 1 September 1638 Monteverdi sat down to write the dedication of his eighth and largest book of madrigals. He addressed it to the newly crowned Austrian emperor Ferdinand III, and proudly entitled it ‘Warlike and Amorous Madrigals’. In a preface to the reader he explained that the idea for the volume arose from his perception that the musical style of his day was well fitted to express love and passion, less so to express the contrary emotions of anger, disdain and war. Monteverdi’s solution to the problem was characteristic of the man and his time. He looked to Classical precedent, and in particular to the pyrrhic measure of Greek poetic theory. By combining its repeated ‘hammer strokes’ with the conventional fanfares and simple diatonic harmony of Renaissance battle music, he developed a new style, the stile concitato, and organized his eighth book in two volumes – one warlike, one amorous – to demonstrate it. The respective themes are announced by elaborate concerted settings of complementary sonnets: Altri canti di Marte (‘Let others sing of Mars’, a poem by Marino) is matched by Altri canti d’Amor (‘Let others sing of Love’, an anonymous imitation of the Marino). The bulk of the volumes are taken up with smaller madrigals, many of them duets and trios, but they end with larger-scale pieces ‘in genere rappresentativo’ – in the dramatic genre. War is represented by Il combattimento di Tancredi e Clorinda and the ballo Volgendo il ciel, Love by Il ballo delle ingrate.

The texts of Altri canti d’Amor and Volgendo il ciel are both in praise of the Austrian emperor Ferdinand III, though Volgendo il ciel was second-hand: Rinuccini wrote the original version in honour of Henry IV of France. Both of them may be second-hand in another sense, for the 1638 collection seems to have been planned originally as a tribute to the previous emperor, Ferdinand II, who died in December 1636; the warlike sentiments would certainly have been more appropriate to him than his more peaceful and artistic son. However, they were probably not performed until 1637, when Ferdinand III was crowned King of Hungary and then emperor, and there was a series of festivities in Regensburg and Vienna. The scoring of Altri canti d’Amor certainly seems to reflect Austrian practice in the way violins and violas are combined with bass and great bass viols, as in the sonatas of Schmelzer and other Austrian court composers; viols became obsolete in northern Italy soon after 1600. The presence of glaring consecutives in the inner string parts suggests that they are not Monteverdi’s work, though the six-part writing adds greatly to the effect.

It is not hard to imagine a simple staging of Volgendo il ciel. The Poet appears with his attendants, some of whom represent Danube water nymphs and dance to the opening entrata. The dancing is interspersed by a recitative in which he calls for a cup of wine, flowers for his hair, and his ‘nobil cetra’ – probably a stage prop representing an antique lyre. The ballo proper consists of a pair of concerted movements in galliard rhythm, each artfully constructed over two statements of a long modulating ground bass. Monteverdi suggests that a canario, passo o mezzo or some other balletto can be danced between them; we have adapted the setting of the canario (simple jig-like variations over three chords) from Michael Praetorius’s Terpsichore of 1612. Altri canti d’Amor may also have been staged. It opens with a sinfonia for two violins, bass viol and continuo announcing a classic amorous theme: the four descending notes of the passacaglia, used at the time for countless love songs. It is taken up by three of the voices, and is elaborated at such length that one begins to suspect that Monteverdi’s tongue was firmly in his cheek. After a splendid warlike section for six voices and two violins the bass, accompanied by all the strings and perhaps dressed as another antique poet, presents ‘this work still green and new’ to ‘gran Fernando’; his words and music are then taken up by the full ensemble.

Il combattimento di Tancredi e Clorinda, Monteverdi explained in the 1638 volume, was first performed during the 1624 carnival in the palazzo of the Venetian nobleman Girolamo Mocenigo. The text is taken from an episode in Tasso’s famous epic poem Gerusalemme liberata, a fantastic account of the Crusades. Tancredi, a Christian knight, challenges a Saracen opponent to single combat. They fight until the Saracen falls mortally wounded; only then, as Tancredi’s opponent asks to be baptized, does he realize to his horror that he has been fighting the maiden Clorinda. Monteverdi included enough production notes with the music to make it possible to visualize the 1624 performance. It begins without warning after a few conventional madrigals have been sung. Clorinda enters first, armed and on foot, followed by Tancredi on a ‘cavallo mariano’ – perhaps a hobby horse rather than a live animal. Then Testo (the narrator) appears and begins to sing. His descriptions of the combat, graphically illustrated in the music, are matched exactly by gestures from the performers.

Perhaps the most remarkable and forward-looking aspect of Il combattimento is that most of the word-painting is provided by the instruments rather than the voices, though Testo has his version of the stile concitato in the form of some fearsome tongue-twisting semiquaver passages. Monteverdi uses the conventional fanfares and rushing scales of battle music, but adds to them a battery of novel devices: the repeated notes of the pyrrhic measure are rendered in the strings as a measured tremulando, which Monteverdi insists must not be simplified by the bass players; music for Tancredi’s horse doubles speed as it breaks into a gallop; pizzicato, the strings struck with two fingers, illustrates short-range blows with the hilt of the sword; Clorinda begs for baptism to string chords using a kind of sforzando, forte to piano within a single bow, and she dies to the accompaniment of ‘smooth bow-strokes’. Such detailed instructions to string players were unprecedented at the time, even in virtuoso violin music.

Il ballo delle ingrate is almost certainly the oldest piece in the collection. Its first version was written in 1608 for the wedding of the ruler of Mantua, Francesco Gonzaga, to Margherita of Savoy. It was performed in Mantua on 4 June amid festivities that included plays, tournaments, a simulated naval battle and Monteverdi’s lost opera Arianna. By comparison with the opera, reputedly his masterpiece, Il ballo delle ingrate was a modest jeu d’esprit. But it had a number of novel features: it brought a measure of irony and even satire to a genre, the ballo, that was normally taken up with elevated sentiments and courtly flattery. It is a cautionary tale of the fate that awaits the hard-hearted in love – of which, it seems, there were a number among the ladies in the audience. Amor (Cupid) complains to his mother Venus that his arrows have ceased to have their usual effect. They visit Pluto at the gates of Hell, and Cupid asks him to release some ingrates from his subterranean realm as a warning to the audience; as they appear Cupid and Venus express their horror and sympathy in a delicate and expressive duet. The women dance two-by-two ‘with grave steps’ to equally grave music, pavan-like and galliard-like by turns, and then Pluto addresses the audience in a formal aria, the verses marked off with ritornelli for two violins and continuo. He ends by commanding the women to return to ‘the infernal kingdom’; they respond, perhaps in desperation, by dancing a livelier ballo, with passages of corrente and gagliarda. As they disappear one of them turns and sings a heart-rending farewell to the ‘pure and serene air’.

We do not know how close the printed version of Il ballo delle ingrate is to that performed in Mantua in 1608. For one thing, the piece was evidently performed in Vienna in the 1620s, and it has been suggested that at least some of the vocal writing dates from then. The role of Pluto, with its virtuoso runs and wide leaps, is closer to the bass parts of Monteverdi’s late operas than Charon and Pluto in Orfeo, and Venus’s little passage of stile concitato at the words ‘gentle warrior’ can hardly be earlier than 1624, when Monteverdi wrote Il combattimento. The five-part string writing in Il ballo delle ingrate probably dates from 1608, for it is much more old-fashioned than the four-part writing in Il combattimento, and it is laid out in the characteristic one-violin, three-viola configuration of northern European violin bands around 1600. A twelve-man French violin band, composed of musicians from Marseilles and Avignon, is known to have toured northern Italy in 1608 before settling in Florence, and the ‘French’ string writing in Il ballo raises the intriguing possibility that they were in Mantua for the wedding celebrations.

The placing of the dance music in Il ballo is a problem. The stage directions call for it in four places: an entrata when the ladies first appear (1), two sections of dancing (2 and 3) – one when the ladies assemble in the middle of the dancing place, the other when Pluto commands them to leave – and a final entrata as they leave (4). In the 1638 volume all of it was printed in a block at 2, but this may have been just for the convenience of the printer; a possible solution, which we have followed in this recording, is to place the first entrata at 1, the first half of the ballo itself at 2 (which explains the subsequent stage direction ‘they dance the ballo up to the middle’), the second half (a self-contained set of variations on a ground bass) at 3, and the last, strangely shortened version of the entrata at 4, where it acts as a moving reminder of the ladies’ short period of freedom.

The use of continuo instruments in this recording needs a word of explanation. A study of Monteverdi’s continuo practice suggests that his dramatic works were performed with a large and varied continuo group – a 1615 letter about the ballo Tirsi e Clori mentions a small lute, two or three theorbos, a harpsichord, a ‘spineta arpata’ and a harp – so we have felt able to add extra instruments to the few mentioned in the 1638 volume: harpsichord and chitarrone in Il ballo delle ingrate, harpsichord with a ‘contrabasso da gamba’ (a great bass viol a size larger than the ordinary bass, not an instrument at 16' pitch) in Il combattimento, and ‘spinetta’ in the third section of Altri canti d’Amor. We have also tried to follow Monteverdi’s methods of deploying continuo instruments: he tended to allocate particular instruments to particular characters, but he also added and subtracted them for particular effects. Thus, in Il ballo delle ingrate we generally accompany Amor with spinet and lute, Venus with theorbo and harp, and Pluto with organ or regal and theorbo, but there were moments when we felt compelled to break our self-imposed rules. In general, it seems to have been the practice of the period not to double the bass lines of solo vocal music with melody instruments, though the ‘contrabasso da gamba’ in Il combattimento is an intriguing exception.