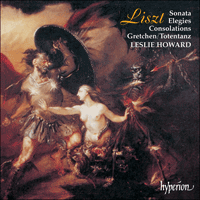 Writers on Liszt are unanimous in their verdict upon the Sonata in B minor: it is Liszt’s greatest piano work, if not indeed his finest composition. It is also one of the few important Liszt works to be ostensibly free of any kind of programme or external reference, although, as Alfred Brendel and others have contended, a case can be made out for relating the structure and content of the piece to Goethe’s Faust. (If, as seems more likely, the piece is autobiographical or self-revelatory, the connection with Faust may still be drawn.) And Brendel is surely right to reject the notion, based on the use of the so-called ‘Cross-motif’ – three notes rising by a tone and a minor third, the first three notes of the plainsong Vexilla regis prodeunt – in the Grandioso second subject, that there is a religious dimension to the work. For a general analysis of the piece of not too technical a nature, Brendel’s essay in Music Sounded Out is strongly commended. Here, a few brief observations must suffice.

Without entering into the many different interpretations by critical commentators upon the broad structure of the work, we may content ourselves that the piece is in a single, unbroken movement, containing a slow central section and a scherzo-like fugato which, viewing the work as a large first-movement form, more or less play the part of the Classical development section as well as give the impression of several movements in one. Liszt was, of course, influenced by Schubert’s ‘Wanderer’ Fantasy in the shape of the piece, but strove to create more of a single dramatic design. He had, by this time, already written two large-scale piano works in which he attempted to fuse elements of two movements into one: the Grosses Konzertsolo and the Scherzo and March, but, excellent as those attempts are, it is only in the Sonata where the aim is triumphantly achieved. Liszt worked very long and carefully at this project, and we may be thankful that he never risked invidious comparison by ever composing a second piano work of these dimensions. The Sonata remains the most important and original contribution to the form since Beethoven and Schubert.

Like the Faust Symphony and many other larger Liszt works, the tonality of the piece is withheld at the beginning, and the first theme, Lento assai (track 1), rhythmically ambiguous octaves separated by silence and followed by a descending scale, is in a kind of G minor. B minor is immediately established at the tempo change to Allegro energico (2) in the eighth bar. Two further themes are introduced in quick succesion – a theme in octaves characterized by the downward interval of the diminished seventh, and a rhythmic motif in the bass easily identified by its repeated notes. Themes two and three inform the ensuing pages until the opening theme returns to herald the fourth theme, Grandioso (3), which takes the music to D major and, in Classical terms, the second subject, which continues by thematic transformation of the earlier material in the new key. Especially beautiful is the delicate melody derived from the third theme (4), its repeated notes no longer menacing. Frenetic development leads to a passage (from bar 255) which corresponds to the Classical codetta (5) and (at bar 277) the development (6) which opens with a transformation of the very opening of the work. An almost operatic dialogue leads to the Andante sostenuto (7) in F sharp major with its new, fifth theme, which alternates with the fourth to create the most passionate of slow movements. A return to the opening material introduces the fugato in the principal fast tempo (8), full of wit and spiky dissonance, before the recapitulation (9, from bar 531) which builds to a great climax (from the Più mosso, 10, at bar 555) before the second subject matter returns in B major, 11. (It is interesting to note that this melody is much more restrained than it was in its D major appearance, and that, despite the wilful tinkering by many a pianist, Liszt does not specify the addition of the bottom octave B here, or indeed anywhere else in the whole Sonata until the very last note. Of all Liszt’s music, this is surely the piece which requires the most absolute fidelity to the text.)

The Stretta (12) Presto and Prestissimo of the treacherous octaves in the coda do not lead to a grand conclusion (although the manuscript shows that Liszt briefly entertained the idea) but to a masterly bringing to rest of all the material, including the theme of the slow movement (13) in a mood of quiet optimism achieved by the most oblique final cadence, from the F major triad to the gently reiterated chord of B major, in its aspiring second inversion until the last note finally releases all tension.

As is very well known, Liszt dedicated his Sonata to Schumann in a reciprocal gesture for receiving the dedication of Schumann’s great Fantasy, Op 17 – a dedication which Clara Schumann spitefully expunged in her edition of her late husband’s works!

The two Liszt Elegies belong very much as a pair: the first (with its French title, Première Élégie) having been composed for a concert in memory of Marie Moukhanoff, and the second (with its German title, Zweite Elegie) written for Lina Ramann to thank her for her article about the first one. Both are cast in 3/4, in A flat major. The first also exists in versions for cello, piano, harp and harmonium, for cello and piano, for violin and piano (with optional harmonium), and for piano duet. The second has versions for violin or cello and piano. Both are based on simple, wistful melodies, and both build to impassioned climaxes before trilling their way to rest upon high A flat major chords.

Although the Consolations have always been very popular among Liszt’s works, especially amongst amateurs relieved at the relative absence of transcendental technical requirements, they are not so often encountered as a complete set. The final version of the pieces seems to require hearing in toto from time to time – no matter how demonstrable it may be that the third is a masterpiece in its own right (and it is interesting that this piece was a replacement of another in E major, which eventually found its far more appropriate resting-place – since it is a setting of a Hungarian folksong – in the first of the Hungarian Rhapsodies). The title originated with an anthology of Sainte-Beuve which had appeared in 1830, although there are no specific references by Liszt to that poet’s work. The design of a guiding star printed above the fourth Consolation gave rise to that work’s now little-used nickname. Although the second and sixth pieces have their moments of extroversion, the general tone of the set is restrained. However, they do not cry out for the desperately ‘worthy’ style of performance to which they are so often subjected!

Along with the Sonata in B minor and the oratorio Christus, the Faust Symphony has always been recognized as one of Liszt’s pinnacles of achievement. Although Liszt produced the whole symphony (and all of the Dante Symphony) for two pianos, Gretchen, the second movement of the Faust Symphony, is the only movement that he published in a version for solo piano: a pity, because he has done the job so beautifully, in exactly the same spirit in which he approached the transcriptions of the Beethoven Symphonies. The piece is a character portrait of Goethe’s heroine, cast in a simple ternary form. The main material is woven around two of Liszt’s finest themes, one a delicate melody with a single line of more florid accompaniment, and the other a theme whose opening chords reveal some splendid part-writing in the imitations of the inner voices. The music of the central section is effective enough without the need to have observed its origins in the first movement. Those who wish to follow all of the extra-musical possibilities would need to hear the whole Symphony, but as a single movement piano piece, the work does not stand in need of further gloss.

The version for piano and orchestra of Totentanz has often been described as the best of Liszt’s works for that medium, and it is surprising that the piano solo version, which is extremely well done (it is slightly shorter at the very end), is so rarely encountered. In the passages where the orchestra was silent, Liszt took over the solo part without alteration, but for the other sections he contrived some rather ingenious solutions and alternatives. There are also one or two notes that will sound ‘wrong’ to the unsuspecting – Liszt changed some of the harmonies and, in one striking place (at the first appearance of the subsidiary theme from bar 466), the melody from the orchestral version. The piece is based on the medieval plainsong Dies irae in five large variations with many smaller ones incorporated, and is one of many examples of the Mephistophelean side of Liszt’s musical character, as well as a testing study in the art of making extreme technical demands serve solid musical purposes.