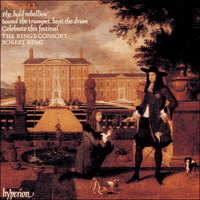 ‘An important milestone towards a new appreciation of Purcell’ (Gramophone)
‘The performances are matched by the outstanding engineering’ (Fanfare, USA)

Fly, bold rebellion was one of Purcell’s early Welcome Songs, composed for Charles II in 1683. The manuscript gives no indication of the date of the first performance, but it seems evident from the anonymous author of the words that it was written shortly after the discovery of the Rye House Plot, which took place in June 1683. The Ode thus would seem likely to have been performed to celebrate Charles’s return from Windsor to Whitehall at the end of June, or perhaps later in the year on his return to London from Winchester (25 September) or Newmarket (20 October). After the splendid two-part Symphony, the Ode contains the already established selection of choruses, trios and solos, interspersed with Purcell’s deliciously scored string ritornelli. One movement in particular stands out: Purcell had an enormous affinity with the alto voice, giving it many of his finest movements, and it is once again for this voice that he set ‘Be welcome then, great Sir’. Over a three-bar walking ground bass the soloist winds an entrancing melody which then develops into a ravishing string ritornello. Elsewhere too there is enchanting string writing: the ritornelli to ‘Rivers from their channels turned’, ‘But Kings, like the sun’ and ‘But Heaven has now dispelled’ are exquisitely crafted. In the concluding chorus ‘Welcome to all those wishes fulfilled’ we find imitative entries in seven parts alternating in real and inverted counterpoint: a final example of Purcell’s extraordinary creative mind.

Sound the trumpet, beat the drum was the last of the three Odes that Purcell wrote between 1685 and 1687 to celebrate the birthday of James II. Queen Mary had been in Bath from 16 August to 6 October, but on 11 October she and King James returned from Windsor to Whitehall, ready for the King’s birthday celebrations on 14 October. The diarist Narcissus Luttrell recorded in his diary that the celebrations appeared to have been on a smaller scale than in previous years, there being ‘no bonefires, being so particularly commanded’. The Ode is contained in a surprisingly large number of sources: one later version (the Kent manuscript), produced after Purcell’s death, used a totally new text and adds trumpets and timpani to the orchestra. However, Purcell’s 1687 version is scored only for strings and, with the names of many of the singers recorded in the manuscripts, we can see that the first performance was a fairly small-scale affair. After a splendid two-movement overture, Mr Abell, the alto, sets the Ode off in suitably military style, punctuated by interjections from both the bass and ritornelli from the strings. By 1687 Purcell was beginning to cut down on the instrumental ritornelli that concluded so many movements in the early Odes, tending instead to move straight into a contrasting vocal section, but the alto duet ‘Let Caesar and Urania live’, set over a two-bar ground bass, is transformed into glorious four-part string writing. The bass, Mr Bowman, must have been an extraordinary singer, for in the solo ‘While Caesar like the morning star’ Purcell utilizes a range from high E down to bottom D. Equally extraordinary is the Chaconne which Purcell includes at the mid-point of the Ode: this is as fine an example of the form as he ever wrote, using a multitude of compositional devices and including a marvellous minor section. Purcell must have been especially pleased with this movement for, four years later, he re-used it in King Arthur.

With Celebrate this Festival we come to the fifth of six Odes Purcell wrote to celebrate the birthday of Queen Mary in successive years from 1689. By 1693 the scoring of the orchestra had been increased to include oboes, recorders and a trumpet and, although the basic plan remained the same, the size and scale of the Odes and their dramatic content had increased. The choruses, often developing out of a series of solo sections, had increased in length and, in the interests of keeping pace with the libretto, instrumental ritornelli had all but vanished, with sections running instead straight into a contrasting vocal movement. Purcell worked closely with the famous trumpeter John Shore, and possible now were movements with virtuoso obbligato trumpet parts, of which the suitably military ‘While, for a righteous cause’ is a splendid example. Similarly, the presence of both oboes and recorders in the orchestra (oboists usually doubled on recorders) enabled delicately scored movements such as ‘Return, fond Muse’ (scored for two recorders and viola). The Symphony, much grander in scale than those of ten years before, was on this occasion copied directly from Hail! bright Cecilia, performed just six months previously, and Purcell was obviously blessed with two fine sopranos, whose opening duet sets a suitably stately tone for the Ode. But there is also writing of great beauty too, in particular the quietly ecstatic setting for solo alto, over a ground bass, of ‘Crown the altar’. Effective, too, is the wonderful seven-part vocal texture at ‘Repeat Maria’s name’ which throws the Queen’s name between voices and instruments before a minuet closes the work in elegant vein.