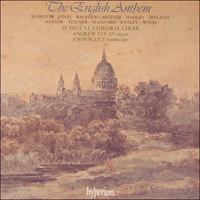 ‘Serene beauty that heals the spirit and calms the troubled soul. They sing with perfect unity and a rare vigour. Hyperion has captured the famed acoustics of St Paul's to perfection. There is no finer collection available’ (American Record Guide)

Sir John Stainer (1840-1901) received his knighthood in 1888 in recognition of his services to church music. In the same year he was forced to resign as organist of St Paul's Cathedral in London, on account of his failing eyesight. Stainer had been appointed there in 1872, after a distinguished career at Oxford, although the poor state of the music and worship at St Paul's had needed radical reform.

It is often said that I saw the Lord was written with the acoustics of St Paul's in mind. It is scored for double choir with an independent organ part. The music's drama is achieved by the simple, largely homophonic texture, and the interplay of the two chorus parts with that of the organ. Stainer breaks into an imitative texture at the words 'and the house was filled with smoke' and again in the final verse section, which is reminiscent of a Victorian part-song.

Like Stanford, his teacher, friend and colleague, Charles Wood (1886-1926) was Irish by birth. After studying at the Royal College of Music, Wood took up residence, like Naylor, at one of Cambridge's colleges <— Selwyn — before being elected to a fellowship. Upon Stanford's death in 1924, Wood proceeded to a professorship. Most of Wood's church music was written with the professional Cambridge college choirs in mind; thus, as Kenneth Long has pointed out, works for double choir abound in his choral output. Hail, gladdening Lightis one such work, relying upon the interplay of the two choirs for its effect. Being inclined to high churchmanship, Wood regularly turned to translations of older texts: in this case the text is a translation by John Keble from the Greek.

Henry Balfour Gardiner (1877-1950), despite having had the privilage of studying music at the Hoch Conservatory in Frankfurt after studying classics at Oxford, considered his musical education to be a strait-jacket to his creative spirit, a stifling influence which caused him to give up composing in 1925 in favour of a career in afforestation. Gardiner spent much of his time helping to establish the works of Bax, Holst, Grainger and Quilter. This probably resulted in his missing the opportunity to promote his own works, some of which betray a strong Delian influence. His Evening Hymn dates from 1908 and is quite unrepresentative of his compositional idiom. The long, seamless phrases, carefully written dynamic changes and effective use of harmonies, have made this piece a favourite in any parish choir's repertory.

Edward Woodall Naylor (1867-1934) studied at Emmanuel College in Cambridge and at the Royal College of Music before returning to his Cambridge college as a lecturer in 1902.

Vox dicentis: Clama was written in 1911 for King's College Cambridge. This motet is unaccompanied, frequently dividing into eight parts, to considerable dramatic effect. The opening of this piece is clearly written with the acoustic properties of King's College Chapel in mind: the pauses and rests in the musical texture allow the sounds to float away in a resonant acoustic, giving the music time to breathe. After a vigorous fugue at 'super montem', a mainly homophonic section at 'Ecce Dominus Deus' leads to a closing section in which the treble solo 'sicut pastor gregem' is accompanied by the rest of the chorus, with slow-moving harmonies.

Samuel Sebastian Wesley (who took his middle name from his father's love of Bach's music) is known to have been 'saturated with old-time ideas, clinging even to the long-condemned and barbarous system for tuning in unequal temperament'; he also refused to resign himself to the changes in the length of the organ's manual compass. Wesley's old-fashioned ideas may well have been a saving grace as far as his compositions are concerned. Blessed be the God and Father was one of the twelve anthems published in 1853. Trends in anthem writing at the end of the eighteenth century had shown a tendency to deteriorating taste; many anthems were multi-sectional, intent on showing off the merits of individual singers. S S Wesley composed using the multi-sectional formats he had inherited, although the individual sections show a greater measure of structural integrity.

Blessed be the God and Father was written for a service on Easter Day at Hereford Cathedral, when 'only Trebles and a single Bass voice' were available, the bass singer being the Dean's butler. The central portion of the work, a dialogue between a treble soloist and the treble chorus, is flanked by passages for tenors and basses alone. The final fughetta after the words 'But the word of the Lord endureth forever' is heralded by a dramatic dominant seventh chord of E flat on full organ.

The Irishman Sir Charles Villiers Stanford (1852-1924) was possibly the most distinguished composer of English church music; his influence upon English musical life was enormous and long-lasting: like Parry, he taught many students who were to become significant composers, and disseminated a teutonic idiom, gleaned from his studies in the mid 1870s in Leipzig and Kiel. Having been appointed as a professor of music in 1883 at the new Royal College of Music, Stanford was elected professor of music at Cambridge University in 1887.

Beati quorum via is the last of his three Motets, opus 38, which date from 1905. This beautiful six-part miniature displays an almost classical balance in its construction, from the way the music unfolds from a single A flat to its equally-still closing bars. The six voices are used in antiphonal blocks and to build up rich harmonic textures at the climaxes.

Sir Edward Bairstow (1874-1946) was appointed organist of York Minster in 1913, a post he held until his death. He took the Doctorate of Music examinations at Durham University in 1902 and became Professor of Music there in 1929.

Blessed City, heavenly Salem exemplifies two characteristics of Bairstow's choral music: an attention to detail in his organ parts, and the use of a plainsong theme, in this case Urbs beata. Bairstow's music is a curious and fascinating mix of Brahmsian harmony with plainsong, Elizabethan and Jacobean musical influences. The bold opening of this work eventually gives way to unison passages for trebles, then tenors and basses. A short organ interlude leads to the climactic central section before a longer interlude heralds the final portion of the work scored for chorus and treble solo.

Let all mortal flesh keep silence was published in 1925. It achieves its mysterious effect at the outset by using tenor and bass parts in octaves, followed by upper voices only at the words 'and lift itself above all earthly thought.' This high-pitched texture returns as the words 'the Cherubim with many eyes' chime out with a short, arpeggiated ostinato-figure in the bass part. The final dramatic alleluias lead to a restatement of the opening material with a dark choral accompaniment.

John Ireland (1879-1962) studied at the Royal College of Music, continuing his studies in composition with Stanford before taking the Bachelor of Music degree at Durham University. Ireland seems to have suffered unduly from the early death of his parents; his marriage was almost immediately annulled in 1927, and in his later life he grew increasingly interested in pagan mysticism.

Greater love hath no man is a relatively early work, having been written in 1912 when he was organist of St Luke's, Chelsea. Ireland orchestrated this anthem in the early 1920s, although it is usually performed in the version with organ accompaniment. This work frequently changes mood: it opens with a broad melody before the tempo quickens to an early climax and the music settles into a treble solo at 'Who, His own Self'. A baritone picks up the theme and the music quickly moves into a dramatic fanfare passage before reaching its thrilling climax. The final section gently sustains the tension which is only relaxed in the choir's final phrase and is continued even to the penultimate chord in the organ part.

Whereas Stanford and Wood collected and published Irish folksongs, Patrick Hadley (1899-1973) was inspired by Vaughan Williams to take an interest initially in English folksongs. After studying at The Royal College of Music and at Cambridge, he joined the former's teaching staff in 1925 before being elected to a fellowship at Gonville and Caius College in 1938. Hadley stayed at Cambridge until his retirement in 1962, having been appointed to the University's Chair in Music in 1946.

Much of Hadley's music is not performed today, although My beloved spake, which was published in 1938, has found a place in the Anglican church music repertoire. It has provision for orchestral, organ or piano accompaniments. Hadley revolves all twelve tones in the space of two bars at 'The fig tree putteth forth', before returning to safer harmonic territory for the final climax, after which the music and the words die away.

After studying with Ernest Farrar, Gerald Finzi (1901-1956) continued his musical studies with Bairstow in York. The death of Farrar in the First World War (and of his father and three brothers) affected Finzi deeply. Adrian Boult advised him to take a course of lessons in counterpoint with R O Morris, which he did in 1925. After teaching briefly at the Royal Academy of Music, the composer retired with his wife to Wiltshire, where he cultivated rare apple trees on his sixteen-acre property and built a unique library which was divided bewteen St Andrew's University and Reading University after his death.

God is gone up is the second of his three opus 27 anthems. It was written in 1951 for a St Cecilia's Day Service at St Sepulchre's Church in Holborn. This well-written anthem of praise, which, like Bairstow's works, stretches the organ's resources, carefully sets the inspirational words taken from the Preparatory Meditations by the Puritan poet Edward Taylor (c1642-1729).