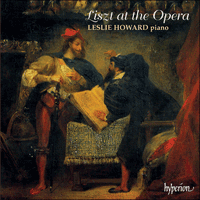 The complete music for solo piano, Vol. 6 - Liszt at the Opera I

Cover artwork: Faust and Mephistopheles by Ferdinand-Victor-Eugène Delacroix (1798-1863)
Reproduced by permission of The Wallace Collection, London

Although Liszt only completed one opera Don Sanche—and that at the age of thirteen—his preoccupation with the dissemination and performance of opera occupied him much of his professional life, whether as a conductor/producer (about which volumes could be written for his championship of works regarded at the time as ‘difficult’) or as a pianist/composer. Apart from his youthful work, Liszt made only sketches, during his most prolific period whilst at Weimar, for various operatic projects which came to nothing—although the most significant attempt, Sardanapale, after Byron, runs to 111 pages. The only near-opera which Liszt completed was his oratorio The Legend of Saint Elizabeth, which was successfully staged as an opera, against Liszt’s wishes and without his attendance, at Weimar in 1881, and it enjoyed a modest career in this form for half a century.

Since in its day the piano work based upon operatic themes was of considerable importance, and since the genre seems to have returned to favour, having been somewhat neglected by the musically short-sighted for the greater part of the twentieth century, a word is due here in praise of Liszt’s achievement in elevating this art to a height which has not been surpassed and very seldom approached by other composers. Many eighteenth- and nineteenth-century keyboard virtuosi produced music in all kinds of structures with the common starting point of music from (usually other composers’) operas. To be able to improvise upon popular arias was an essential part of the early pianist’s repertoire, and certainly Mozart and Beethoven both excelled at it. Many formal sets of operatic variations were published, and again Mozart and Beethoven feature prominently. But the large-scale fantasy or paraphrase really came into its own in the nineteenth century and, with best respects to Thalberg, and even to Chopin, it was Liszt who brought the genre to its apogee. The aims of the sixty or so piano works which Liszt based on operas were many: the propagation of the deserving but unknown; pre- or post-theatre familiarising of an audience with the material; the challenge of a new form akin to, but different from, variation; the sedulous imitation of voices and orchestra at the keyboard and the encapsulation in a relatively small work of the dramatic ambit of a much larger one, all play their part. Sometimes Liszt makes a bar-for-bar transcription, as with the overtures by Rossini, Wagner or Weber, or he makes a looser paraphrase of a particular number or section (The Flying Dutchman, Aida, Eugene Onegin, Lucia di Lammermoor) in which his keyboard skills make one forget the original medium, even if Liszt’s contribution as an original composer is relatively small. In the largest and finest of the fantasies, such as Don Giovanni or Norma, he actually sheds new light upon the originals, and one can only regret that his interest in opera composition was stifled by his very enthusiasm for other men’s work.

In his transcription of the Freischütz overture, Liszt works in much the same manner in which he transcribed the Beethoven symphonies: the music is faithfully notated, but sometimes the actual notes are somewhat rearranged in order better to produce something like the effect of the original instrumentation. In this kind of transcription Liszt always gives alternative versions in those passages which might be thought to have exceeded their brief in search of a good pianistic response to orchestral colour, but on the whole the more daring alternative is the more musically compelling.

Much has been written about the uncanny insight into Don Giovanni which Liszt shows by taking the seduction duet (with variations), the drinking song and the music of the statue of the dead commendatore and weaving a commentary upon the moral pith of the original. Even Bernard Shaw (who dismissed a masterpiece like the ‘Dante Symphony’) was obliged to rate the piece very highly, and indeed the Don has withstood the vicissitudes of public taste and has more or less remained in the repertoire. On this record the fullest possible version of the piece is presented, right down to a short cadenza in the first variation, which is to be found on a leaf in the Library of Congress but which was in fact published in the shorter two-piano version of the work, and actually postulated for inclusion in the solo version in the excellent critico-practical edition of Busoni.

Next to Wagner, Verdi was the operatic composer who inspired the greatest number of Liszt’s opera pieces. (One hesitates to say just transcriptions, or fantasies, or paraphrases, and Liszt himself was rather lax about the distinctions between them—the rule of thumb ought to be: a ‘transcription’ is simply that; a ‘paraphrase’ is a freer version of material which remains intact in some way; a ‘fantasy’—which Liszt often called ‘Réminiscences’—is a new musical structure incorporating variation and extension.) Liszt called his Aida piece a transcription, but it is surely a paraphrase, in which the religious themes are somewhat altered to make a more mystical tone-poem, and the duet is separated from the temple chorus at the end—Verdi’s ‘split level’ effect would be impossible to realise on the piano!

Although Tchaikovsky was not so kind in his later references to Liszt, it is clear that he owed much to Liszt’s example as a composer, as well as to his generosity in setting up a production of Eugene Onegin at Weimar. The transcription of the Polonaise makes some very interesting deviations from the shape of the original, especially in a brilliant variation towards the close.

It is a mystery to the present writer that no-one sees fit to revive Glinka’s marvellous Russlan. Although the overture has been a war-horse in its time, there is much more to the opera than that. The march of the wicked dwarf Chernomor (literally Black Plague!) attracted Liszt from the beginning. He made two versions for piano—the superior revised version is played here—and one for piano duet, each with slightly different endings, because in the original the March breaks off very abruptly.

Almira was Handel’s first opera, and it received such scant attention that it is little short of amazing that Liszt should have taken it up, writing a sort of double set of variations on the two dances which occur near the beginning of the work (Chaconne then Sarabande in the opera). Curiously, it is the Sarabande which predominates, rather like a Bach-type chaconne, whereas the Chaconne proper is of the balletic variety and nothing to do with repeated bass lines. This almost amounts to an original work of Liszt’s (and Humphrey Searle so catalogued it) but Handel always remains part of the equation, even in the grandiose major key transformation of the Sarabande at the end.

Berlioz made a new version of Benvenuto Cellini for Liszt to produce in Weimar, and Liszt sought to improve the popularity of the work by immediately issuing the present transcription—of the Pope’s Blessing and of Cellini’s Oath—for piano and for piano duet. This remains another of those operas whose rarity is inexplicable.

Gounod’s Faust, despite its cavalier approach to Goethe, has held the boards from the beginning, but Liszt’s ingenious elaboration of the Waltz, into which he inserts material from the first encounter of Faust and Gretchen, goes a long way towards restoring the demonic spirit of the play, and especially of the dark purpose of Mephistopheles in the relationship of the lovers. Musically, Gounod is transformed and transcended at a stroke!

We have Liszt to thank for the title which has clung, with Wagner’s approval, to the last scene of Tristan. Of course, this would be the last opera that Liszt heard before his death, and it had been close to his heart from its inception. A short phrase taken from the second act duet introduces a transcription of Isolde’s Love-Death which manages to convey not just Wagner, but Liszt’s total admiration of the music which he thought to be the greatest of its time.

Liszt’s Lucia fantasy turned out to be so large that the original publisher insisted on its being split into two works. Here they are at last re-united by juxtaposition, and thus the similarity of their codas will not go unnoticed. The first part—published as Opus 13 and subtitled ‘Fantaisie dramatique’—is founded upon the closing sextet, and the second upon the scene at the tomb. Together they represent the best of Liszt’s early operatic fantasies.

Queen Victoria’s cousin Ernst wrote a good deal of music if not exactly a deal of good music, but Liszt was a kind man and actually conducted Tony, oder Die Vergeltung (‘Tony, or The Retribution’), hence the transcription, which does its best with the pretty commonplace hunting chorus. (Liszt also transcribed one of the songs and wrote a march based on a theme from another of the operas!)

Meyerbeer has not enjoyed anything like the good press in recent times that he had during his lifetime, but it would be a mistake to undervalue him to the point of dismissal. There are plenty of musical reasons as well as dramatic ones why works like Les Huguenots, Le Prophète, or L’Africaine should have proved such successes. Liszt’s two paraphrases make an excellent advertisement for L’Africaine, and pianists at least should consider a speedy revival.

The three pieces which follow remain in manuscript. Although described as ‘three’ in all the catalogues, there are really only two pieces, but the first has two parts to it, preceded by a short introduction. Actually Liszt crossed out the first part (8), so it is possible that he intended to publish just the introduction (7) and the Berceuse (9) which forms the second part. (The origin of the first part is a mystery at present—it is certainly not in Masaniello, and in any case Liszt left the whole manuscript untitled.) The remaining piece (10) may not even be by Auber—the New Liszt Edition is calling it—Piece on an unknown theme—but its operatic origin seems certain from its narrative style, and it is a splendid melody which wants rescuing.

The Norma Fantasy stands next to that on Don Giovanni for its ability to capture the essence of the operatic drama in a new structure. It is probably for dramatic reasons that Liszt ignored the famous aria ‘Casta Diva’ (which Thalberg used as the basis for his fantasy) but instead chose no fewer than seven other themes for his gloriously elaborate work—a triumph of understanding not just of Bellini’s masterpiece, but of practically all the sound possibilities of the piano in Romantic literature.

Cover artwork: Faust and Mephistopheles by Ferdinand-Victor-Eugène Delacroix (1798-1863)
Reproduced by permission of The Wallace Collection, London