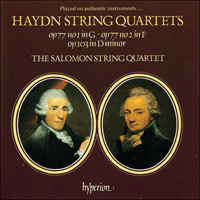 In 1799 Haydn was probably the most famous and successful composer who had ever lived, for his career coincided with the beginnings of a mass market for music; he was the first musician whose fame was created by the dissemination of his music in printed copies. Printed editions had enhanced the international reputations of Corelli and Handel, but they, like other Baroque composers, established themselves in the firs t instance through their personal appearances as virtuoso performers. Haydn was not an outstanding virtuoso on any instrument (except for that collective instrument, the orchestra), and until his long-standing patron Prince Nikolaus Esterházy died in 1790 he was not free to live the life of a travelling celebrity. Before the 1790s Haydn's fame also depended to an unusual degree on his cultivation of a limited number of genres of instrumental music — the symphony, the piano trio, the keyboard sonata and, above all, the string quartet — though in the course of a busy career he had composed in virtually every genre of the time. H C Robbins Landon has suggested in his monumental biography of Haydn that in the 1780s the composer began to avoid certain genres out of a desire to avoid direct competition with his friend Mozart: he stopped writing operas (with the exception of one commissioned work) and keyboard concertos altogether after Mozart's mature works in these genres appeared in the course of the 1780s.

The curious circumstances of the composition (or non-composition) of Haydn's Opus 77 Quartets may also have something to do with a rival, though in this case the person concerned was not Mozart but his brilliant and abrasive pupil, Beethoven. Haydn had been commissioned to write a set of six quartets by the young Austrian aristocrat Prince Lobkowitz, an enthusiastic amateur musician who was to support Beethoven and whose private orchestra was later to give the first performance of the 'Eroica' Symphony. Two of the Opus 77 Quartets were certainly completed in 1799 — the autograph scores are dated that year — and a letter of 1801 to Breitkopf from the Leipzig publisher's Viennese agent states not only that Haydn had been well paid by Lobkowitz for them but that by then four of them had already been composed. It is not clear whether one or more of the Lobkowitz Quartets was destroyed by the composer or was subsequently lost, or whether G A Griesinger, the author of the 1801 letter, was just mistaken, for today we have only two completed Quartets from the projected set of six, published as Opus 77 in 1802, as well as two movements from a third that were published separately as Opus 103 in 1806 when it became obvious that the aged composer would not complete the work.

Whatever happened, Haydn's failure to finish the whole set was not caused by age or incapacity, for he was still able to write a full-scale orchestral mass as late as 1802. It probably had more to do with the appearance of Beethoven's Opus 18 string quartets, which were published in 1801 after much revision; they were also dedicated to Prince Lobkowitz, and Beethoven was having early versions of them played in Viennese salons around the time Haydn was, or should have been, composing his own quartets for the Prince. By the turn of the century the relationship between the two composers was fraught with conflict: Beethoven had been openly critical of The Creation, while Haydn's friends and admirers began to record his ambivalent remarks about the younger composer. The Opus 18 represented a direct challenge to Haydn's supremacy in the quartet genre — a challenge that the older composer could or would not meet.

There are certainly aspects of the Opus 77 Quartets that have been interpreted as the influence of the young Beethoven on Haydn; but, as often happens in these cases, the evidence is ambiguous. All three of the Minuets have tempo indications that include the word 'presto', though in two cases it is qualified by 'ma non troppo'. It used to be thought that the one-in-a-bar scherzo was an invention of Beethoven that Haydn had taken up in his last quartets, but recent research into Mozart and Haydn's tempi conducted via the metronome marks of Czerny and Hummel (see Early Music, February 1988) suggests that some symphonic minuets were already scherzo-like in the 1780s. Similarly, the unexpected key relationships of a third in these works — Opus 77 No 1 in G, Adagio and Trio of the Minuet in E flat; Opus 77 No 2 in F, Trio of the Minuet in D flat, Andante in D; Opus 103 in, it seems, D minor, Andante in B flat — are often thought of as Beethovenian, but as Robbins Landon has pointed out, such experiments, always in a downwards direction, go back at least to Haydn's opera La fedeltà premiata of 1780. Beethoven's influence, such as it is, seems to consist in a number of daring turns of phrase and harmony, such as the shift — up a semitone and 'forte' to 'pianissimo' — in the middle of the Adagio of Opus 77 No 1, or the whole of the driving and rhythmically unstable Minuet of Opus 77 No 2.

Haydn's Opus 77 Quartets are best thought of as a retrospective of the Viennese string quartet, by the man who more than any other had shaped its history for half a century; the ten movements contain at least four distinct idioms that had waxed and waned in the medium during that time. Counterpoint, a relic of the string quartet's origin in the Italian concerto a quattro and an essential ingredient of the string quartet of the 1770s (as Haydn's Opus 20 Quartets show), only occasionally comes to the fore — as in the wonderfully concentrated yet casual canonic passage in the Finale of Opus 77 No 2 — but it is implied by the continuous use of a semi-contrapuntal, democratic interplay between the four instruments, a mode of quartet writing that Haydn had virtually invented. Most quartet composers, including Mozart on occasion, preferred the concerto-like 'quatuor brilliant' idiom; Haydn alludes to it here in the elaborate, operatic Adagio of Opus 77 No 2. Mozart, the master of expansive march-like first movements, is the obvious starting point for the 'Allegro moderato' of Opus 77 No 1, though the subsequent working out of the movement, largely concerned with a pithy discussion of two tiny dotted figures, is Haydnesque through and through. Mozart is also evoked, perhaps more by chance than design, in the first idea of the 'Allegro moderato' of Opus 77 No 2, which bears more than a passing resemblance to the 'catalogue' aria in Don Giovanni. Finally, Haydn's 'popular' style of the 1790s, an effortless blend of popular song, wild eastern-European dance music and sonata form, is represented by the Finales of both Quartets; the first, as Robbins Landon aptly puts it, is 'a summing up of one whole side of Haydn's many-sided nature, not least his love for folk music and his brilliantly successful attempt to wed it to the great tradition of western music'.