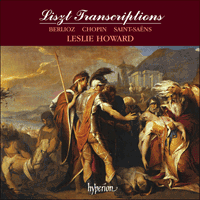 The art and morality of the transcription was a hotly disputed question until very recent times; a climate of artificial purity in concert programming conveniently ignored the historical fact that virtually every Western composer since Pérotin has felt the necessity to use other men’s music, either to change the musical forces employed or to alter, embroider or vary the original material. Sense has prevailed, and even some of the more outrageous potboilers in the demi-monde of the virtuoso salon encore have gained perhaps even greater respectability in revival than they actually had as the Gebrauchsmusik of their day.

No composer can ever have done more in the business of transcription than Liszt. Hundreds of piano pieces generically entitled transcriptions, paraphrases or fantasies fell from his pen over a period of more than fifty years. The degree of Liszt’s participation varies from that of the ‘conscientious engraver’, as he wrote himself in the preface to his Beethoven Symphonies, to that of the composer who merely uses a pre-existing theme to generate an almost entirely new work. Naturally there are many intermediate varieties, and this first recording of transcriptions (and we shall continue to use that term for the sake of convenience) in the present series shows a broad range of Liszt’s methods.

Saint-Saëns was a fervent disciple of Liszt, and the older man showed his customary generosity to the younger by championing his music—Liszt arranged for Samson et Dalila to be staged at Weimar, for example—and Saint-Saëns introduced much of Liszt’s orchestral music to French audiences for the first time. Liszt dedicated his Second Mephisto Waltz to Saint-Saëns, who wrote his Third Symphony for Liszt, eventually inscribing it to his memory. Saint-Saëns was among the earliest followers of Liszt to compose a symphonic poem, and the Danse macabre is perhaps the best-known of his four works in the genre. Liszt’s transcription extends the original at many points, usually to accentuate the macabre elements and, memorably, to extend the lyrical central section which is rather short in the original. The loss of orchestral colour is more than compensated for by the breadth of variety in the palette of Liszt’s piano writing.

Chopin’s relationship with Liszt was often a stormy affair, but the mutual respect was firm enough, no better shown than by Liszt’s efforts to be Chopin’s first biographer—and the book is by no means as bad as some critics have attested!—and by the time and care which Liszt put into these Six Polish songs. The songs are certainly the only really neglected part of Chopin’s output (can it be simply because most singers are unfamiliar with Polish?) and here, as in dozens of other cases, Liszt seeks to propagate that which he already knows to be first-rate. In The Wish (often called The Maiden’s Wish in older editions), the simple melody is treated to elaborate variations which in some way illuminate the original text, which describes a girl who, in turn, would be the sun, or a bird, in order to show her love. Spring is an artless little poem about love, life and the spring, which Liszt arranges in the simplest way. The Ring and Merrymaking (also known as Drinking Song) are both mazurkas, and Liszt joins them together, pausing to quote the first, which speaks of a jilted boyfriend, towards the end of the second, where love is seen as less reliable than drinking. Liszt captures Chopin’s expanded mood exactly in My Darling (My Joys, as it has been strangely rendered) and the poem of desire breaks forth in operatic grandeur, while the last song, The Bridegroom (The Return Home) is made into a magnificent little symphonic sketch, far outreaching Chopin’s handling of the text, which describes the vain ride through the windswept forest of the bridegroom who will not reach his bride before she dies.

Liszt’s instant enthusiasm upon first encountering the music of Berlioz was immediately turned to practical account and, indeed, some of Liszt’s transcriptions, made often to bring the music to audiences whose local orchestras just couldn’t play it, were published before the original scores. Aside from the operatic transcription from Benvenuto Cellini, the Symphonie fantastique and the Harold en Italie (with viola), these works represent all the Berlioz pieces which Liszt transcribed or, in the case of the Idée fixe, composed. Perhaps fearing that the melody which holds together the Symphonie fantastique was too long for the memory of the average music lover, Liszt made a delectable nocturne from it—a sort of propaganda piece—but very beautiful in its own right. (It is also incorrectly listed in The New Grove under its subtitle as an original Liszt piece! Some sources list a version from 1833, but it seems that the 1846 piece, published by 1847 at the latest, is the first version. A later, simplified version was made as an introduction to the independently-issued March au Supplice from the Symphonie fantastique.) Berlioz rescued the overture from his unfinished opera Les Francs-Juges and issued it separately. Liszt’s piano version does its best not to omit any detail from the original and, in the two passages where changes have to be made, conjures up such an effect as to make us forget the alteration. The Pilgrims’ March—chanting the evening prayer is the only part of ‘Harold’ that Liszt arranged without the need for the viola. To compensate for the absence of the cross-string bowing at the end of the movement, Liszt gives us the passage twice, with entirely different textures, as if to apologize! The Valse des Sylphes (thus in the published copy, ‘Danse’ in the Liszt catalogues, and ‘Ballet’ in Berlioz’s score!) is a study in delicate tone-painting in which a pedal D has to be sustained quietly throughout, and the calm to the ear belies the extraordinary amount of moving about the keyboard which the piece entails. The King Lear Overture is a special case: although we have some correspondence between Liszt and Berlioz on the subject, it remains unclear why the transcription remained unpublished and, as far as we know, unperformed. The British Liszt Society published the work in 1987, and the present writer gave the first performance in modern times at the Wigmore Hall in the same year. It is clear that Berlioz made a few changes to the score before it was published—but after Liszt’s transcription had been made—and these have been incorporated in this performance. (The Liszt Society publication contains a critical apparatus which makes clear all of the minor discrepancies. The aim in this whole series of recordings will be, as far as possible, to reconcile Liszt’s text with the original scores—something unfortunately rarely undertaken in Liszt publications—if it is clear that Liszt is intending to make a faithful piano score of the original without elaboration or variation. Hence, for example, the extra bar in the Francs-Juges Overture, doubtless added by Berlioz after the Liszt version was published, the twelve altered bars at the very end of King Lear, and the doubling of the length of the last chords of the ‘Pilgrims’ March’.)