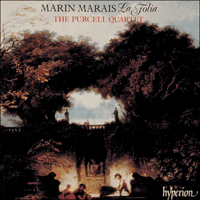 ‘Marais' music is full of interest, and the strong contrasting characters of individual movements are well served by the Purcell Quartet’ (Which CD)

For viol players, the music of Marin Marais is central to their repertory; and yet to the rest of the world he is hardly known at all. Like so many renaissance and baroque composers, he wrote almost exclusively for the instrument upon which he was so pre-eminent, the viola da gamba (or ‘basse de viole’), and therein lies the reason for his almost total obscurity. The viola da gamba fell out of use with the death of its last great exponent Carl Friedrich Abel in 1787, and for one hundred years or so it was hardly played at all. At the end of the nineteenth century Arnold Dolmetsch started a revival of the instrument, its playing styles and, most importantly, its music; for so much music lay unplayed simply because it was for an obsolete instrument. The music of Bach, Handel, Vivaldi and others could be played on the modern equivalent of whatever instrument for which it was written, scarcely changing the notes at all: harpsichord to piano; lute to guitar; strings and wind were essentially the same; even the Bach sonatas for viola da gamba and harpsichord could be (and still are) played almost directly on cello and piano.

Bach, who was not a viol player, wrote without exploring the technical possibilities of the instrument. Not so Marais, however, who delved into the shadiest corners of the viol’s technique, using fully the seven strings and all the chordal possibilities, extending the range up above the fingerboard, and enshrining his marvellous music in a notation at once supremely exact, expressive and yet deterring to those not versed in the almost secret code of battements, enflés, coulés des doigts and so on. In fact, once penetrated, Marais’ notation is a very important source of information about baroque style, and even the exquisite engraving of the published livres seems to be expressive of something about how the music should sound.

This recording illustrates the two strands of Marais’ musical career. On the one hand he was the virtuoso viol player—‘an incomparable Parisian violist whose works are known all over Europe’, according to Johann Gottfried Walther’s Musikalisches Lexicon of 1732—and on the other he was a pupil of the great Lully, in whose style he composed several tragédies lyriques, including Alcyone, the storm scene of which inspired similar music from many other composers, not only in operas but in religious music too.

As a viol player, Marais studied principally with Ste Colombe, who was the finest French viol player of the seventeenth century, but about whom we know very little, not even his first name. Ste Colombe was credited with fitting the normally six-stringed instrument with a seventh, made possible by recent advances in string-making technology, taking the lowest note down to A below the bass stave. This seven-stringed instrument was then taken up by virtually all players in the coming years: most of Marais’ music requires it, and Bach uses it in the solo in the St Matthew Passion. Marais’ studies with Ste Colombe, however, were cut short after about six months as the master, who began to fear his position as top viol player might be usurped by the pupil, refused to continue with the young student. The story has it that Marais hid under the floorboards of the master’s summer pavilion in order to hear and see those finer points that were denied him. Ste Colombe’s fears were entirely justified—in 1676, at the age of just twenty, Marais became ‘Ordinaire de la chambre du Roi pour la viole’ and remained in royal service until 1725, three years before his death. He seems to have led an unexceptional life, writing over 550 pieces of exceptional music for his instrument. He fathered nineteen children.

The Suite in D major comes from the third book of ‘pièces de viole’ of 1711. In the Avertissement to this volume, Marais remarks that:

The most beautiful pieces completely lose their charm, if they are not executed in the style which is correct for them and, not being able to give a good idea of this style with the ordinary notation, I have been obliged to supply new marks that will express my wishes to those who will play my pieces. It is also à propos to inform the public that most of these pieces can be played on several other instruments, such as the Organ, the Harpsichord, the violin, the treble viol, the theorbo, the guitar, the flute, the recorder and the oboe.

The suites consist of many pieces—some dances, some character pieces—and are clearly not intended to be performed complete. The selection I have made from the wonderful Suite in D gives us a short, but very sweet Prelude; a shorter Fantaisie with the longest bowing slur Marais wrote (covering thirty-six notes); a characteristically powerful Allemande; the sublime Plainte, and Charivary which my dictionary tells me means ‘rough music, hubbub or clatter’.

Les folies d’Espagne come from the second book (1701). Marais tells us that the book was some time in coming to press as he worked hard at the basse continue of the volume and the engraving took a long time. It is therefore impossible that he could have heard Corelli’s ‘La Folia’ which had appeared in Rome in 1700 as part of the opus 5 solo violin sonatas, but all the more unusual that possibly the two finest of all ‘Folias’ should have been composed almost simultaneously. Instead of Corelli’s twenty-three variations Marais has thirty-two, but there is a similar integration of the bass part with the solo and full use is made of the viol’s superior chordal possibilities. The original dance must have been known to be from the Iberian peninsular—hence the title—and Marais on more than one occasion imbues variations with Hispanic flair, hinting occasionally at guitar strumming.

The other side of Marais’ output is illustrated by the two suites from his Pièces en trio pour les flûtes, violons et dessus de viole of 1692, which are credited as being the first trio sonatas published in France. In style, however, they owe everything to Lully. Lully himself only wrote the top two parts and bass of his orchestral music for the operas, leaving a pupil, such as Marais, to fill in the middle two viola parts according to the figures of the bass; and the stage never seems far away in these suites.

The Suite in C major, for example, starts with a Lullian French overture—majestic dotted notes and then a quicker three-time section—and ends with the traditional conclusion of the Lullian opera, the Chaconne, the signal for all those in the audience hitherto not paying attention to get to the front of their boxes in preparation for the applause, and in which all those characters on the stage still alive at the end of the drama join in a joyous dance. In its chamber music form, however, it becomes like the whole drama in miniature, with a dark and passionate minor section in the middle and many contrasting moods, affording Marais almost unending possibilities to display his invention.

The harmony throughout these suites, but particularly the Suite in E minor, is intense and sensuous, in marked contrast to the simplicity of the dance structures into which this molten passion is poured. The tension thus created can be electrifying. The structure of these movements is essentially repetitious and is notated in shorthand repeat signs. There is never any suggestion that these are at all optional, and we have observed them all, preferring to include fewer movements complete than more curtailed. This music embodies the values of the society which produced it, where time spent cultivating le bon goût in all forms of culture was not regarded as time wasted. On the contrary, in stark contrast to our own age (where to be busy is to be important, to be wanted), to have time to contemplate and cultivate the beautiful was the goal.

We can be reasonably certain that the pitch for chamber music in Paris in the second half of the seventeenth and the first half of the eighteenth centuries was around one tone below modern concert pitch. At this pitch strings speak slower, but the texture is lusher and more sonorous. Our tempi were influenced greatly by this fact. The harpsichord we have chosen is a copy of a double manual instrument by Louis Denis of 1667. The French seventeenth-century instruments are much smaller, and have a more exact sound than their more ubiquitous cousins by Taskin and the like from a century later.