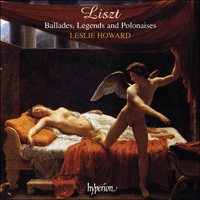 ‘A highly distinguished release’ (Gramophone)
‘The sheer quantity of music on offer may be impressive but the quality of the playing is even more remarkable, warmly sympathetic and, where necessary, thrillingly bold and impassioned’ (BBC Record Review)

This series of recordings of Liszt’s complete piano music began in the Liszt anniversary year 1986 with the complete waltzes. Liszt’s admiration for, but essential difference from, Chopin was remarked in the notes to that recording, and in this second collection, whose titles also bear resemblance to Chopin, it is once again Liszt’s originality which shines through, no matter what degree of homage is intended to Chopin’s models.

Among the sillier notions of our time is a theory, propounded by a number of writers on music who will be glad to have their anonymity preserved here, that Liszt stood in awe of Chopin’s musical forms and felt unable to express himself in them until after Chopin’s death, when he immersed himself in almost all of them. A few minutes’ inspection of the relevant dates shows a certain amount of plain error, and even a quick look at the music suffices to show that, whatever the inspiration, Liszt’s aims were at once totally different. It just happens that Liszt’s retirement from the life of the travelling virtuoso took place only a year or so before Chopin’s death and, for all the music Liszt had written previously, he now devoted himself to correcting earlier works, developing unfinished projects and striking out into new musical forms. And in between these supposed Chopin obsequies Liszt produced the final versions of fifteen Hungarian Rhapsodies, two books of Années de pèlerinage, the Transcendental Studies, the Paganini Studies, the Sonata, several symphonic poems and much besides. Meanwhile he conducted several seasons of opera, including three of Wagner’s. So the idea of brooding at length over his departed quondam friend and releasing his debt in music of Chopinesque titles remains a barrier to comprehension.

There is no explanation for the absence of the subtitle to the First Ballade from all editions apart from the Paris edition of 1849 and the Neue Liszt-Ausgabe of 1981. Nor is there any specific reference by Liszt as to the source of that title. We can only assume that, as in so much of Liszt’s music, there is an underlying narrative structure behind the musical one. The introduction alternates two phrases, the first of which is a clear reference to the beginning of Chopin’s First Ballade! The second is a delicate scherzo-like motif, and both imply a key of D major, soon to be confounded by the arrival of the Crusader’s Song proper, in D flat. The piece unfolds as a set of variations punctuated by a middle section—a kind of joyful march, replete with risky gestures of rapid scales between the phrases. This is an altogether happy and uncomplicated work, inexplicably neglected in the concert hall.

The Second Ballade has enjoyed quite a revival in recent years, and is a much darker and more substantial piece than the first. Although there is no published subtitle, it has long been known that the work was inspired by Bürger’s ballad Lenore—described by Humphrey Searle as ‘charnel-house-romantic’, but nonetheless also used by Liszt as the basis for a recitation with piano in 1858 (with completely different music) and by Raff as the inspiration for his excellent Fifth Symphony. Apart from the tremendous drama of the piece, the musical skill of the transformation of themes is astonishing: the wonderful, almost operatic melody at the end is so convincing in its own right that it comes as something of a surprise to realize that it is merely a variant of the opening theme. The coda, with its last reminiscence of the magically simple second theme is masterly, and we may be forever thankful that Liszt abandoned an earlier noisy conclusion long before publication.

The St Francis Legends are two of Liszt’s finest examples of conjuring up natural imagery at the keyboard, the first with its very delicate imitation of birdsong—of which we are given quite a feast before the sermon begins—and the second with its opportunity to describe a storm at sea. The first is inspired by the well-known story, as related in The Little Flowers of St Francis of Assisi, when St Francis, marvelling at a multitude of birds in the trees by his path, breaks off his travels in order to preach to them. Liszt’s ‘other’ patron saint, St Francis of Paola, is not so famous, but his story provokes a stupendous musical response from Liszt, who kept a painting of the legend in his study for many years: a ferryman refused to carry the saint across the Straits of Messina, saying that saints ought to be able to walk on water. Improvising both raft and sail from his cloak and staff, St Francis crossed safely. Each of these legends quotes one of Liszt’s own choral pieces inspired by each saint: the first uses a theme from Cantico del Sol, S4; the second a passage from An den heiligen Franziskus von Paula, S28. The narrative background to the pieces in no way hampers Liszt from devising a very satisfying musical structure.

The Berceuse exists in two very different versions: the 1854 piece is, for all its debt to Chopin’s model, also in D flat, with a constant D flat pedal-note, simpler than Chopin’s in conception, and largely free from florid decoration. The later version, whilst it preserves the harmonies of the original and the melodic fragments, applies an almost overwhelming amount of filigree ornament. Although this makes for rather a long work, it is also an impressively soothing one, and the studied absence of a continuous melodic line produces an ineluctable wistfulness. The Impromptu, too, has a second version, curiously entitled Nocturne, but the changes are slight, and, frankly, do not improve upon the original score which is recorded here. One of a number of isolated pieces which Liszt composed for his friend, the Baroness von Meyendorff, the Impromptu stands on the threshold of the extraordinary avant-garde world of Liszt’s final years, and, although the piece is cast in F sharp, there is a colourful ambiguity in some of the harmonic movement. The Piano Piece in A flat No 1 is a real rarity. The Neue Liszt-Ausgabe does not print it [at the time of writing], believing it to be lost. They do print the Piano Piece in A flat No 2, of uncertain date, which is more or less identical with the main theme of the First Ballade, but transposed into A flat. Both works are album-leaves, and neither was given a title by Liszt himself. Briefly, the history of No 1 is that it was sighted in manuscript in 1968 when it was auctioned into private hands, and has not been seen since. But a previous owner of the manuscript had permitted its publication in The Piano Student—a magazine long since defunct—in December 1935, whence the Liszt Society obtained it, for publication in 1988 through Bardic Press. Composed in May 1865, and marked Sans mesure, this work, too, bridges the gap between the world of the Liebesträume and that of the late pieces, and does so with utter simplicity.

The two Polonaises once again recall Chopin, but only for the titles; the epic spread of the first one, in particular, has no equivalent in the Polish composer’s canon, and there is a ceremonial feeling to the second which brings other non-Polish Polonaises to mind, such as those of Beethoven, Schubert or Tchaikovsky. The C minor piece, entitled ‘mélancolique’ by Liszt, though most editions omit to mention it, has remained rather sadly neglected, but it is an excellent work of its kind, seeming to bear the woes of the whole world on its shoulders. Even the contrasting major-key tune fails to alleviate the gloom, which is confirmed by a very strange meditative cadenza in which the pulse changes to 4/4 and the dance-style of the Polonaise becomes a distant memory. The Second Polonaise used to be something of a warhorse: Busoni played it (and saddled it with much too long a cadenza, however interesting!), and Rachmaninov and Grainger both recorded it. A little less hackneyed nowadays, it remains a good foil for its companion, and its ingredients of two splendid themes and some really musical pyrotechnical variations make it a compelling concert-piece.