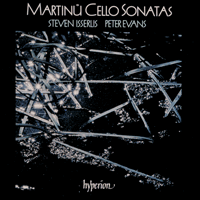 ‘This fascinating record is another tribute to the enterprise of the Hyperion label. It deserves a rich return’ (The Sunday Times)
‘Steven Isserlis is one of the finest of the current generation of young British cellists, and this recording is a worthy successor to his Hyperion CD recitals of Faure and Brahms’ (Music and Musicians)

Bohuslav Martinu (1890–1959) may be numbered among the ranks of the eclectics. One dictionary defines an eclectic as ‘one who selects that which is best in everything: the opposite of exclusive’. As far as Martinu is concerned this seems apt. He was certainly selective: he remained open to influence, yet he contrived throughout his maturity to transform whatever he selected into something recognizably personal.

A native of Policka, a small town in South Bohemia, Martinu’s earliest years were spent, literally, living at the top of a church tower surrounded by family affection but otherwise cut off from most of the influences that go to make for a natural childhood. His earliest perception of the world – as something distant, magic, fantastical – remained with him, though the world was to hand out harsh treatment to him. His was a complex nature. The fantastical always appealed to him, but while not averse to flirting with fashion he retained a taste for the simple, and towards the close of his life gave tender, almost mystic expression to recollections of his native land.

In 1923 Martinu took up residence in Paris, a voluntary exile that by force of circumstances was to become permanent. He was on the Gestapo blacklist, so he and his wife were forced to flee before the German advance of 1940. After a short stay in Vichy France the couple made their way to America, arriving in New York in March 1941. A brief interlude in Europe in 1953 resulted in his final return in 1955 to become a peripatetic resident in Paris, Rome, Nice and, finally, Paul Sacher’s home in Schönenberg in Switzerland. He died of cancer on 28 August 1959 in the sanatorium at Liestal. It was twenty years before his remains were returned to the land he loved so dearly.

Martinu’s first work with the cello as a solo instrument was the Concertino composed in Paris in 1924, shortly after the composer took up residence there and had musically ‘adopted’ Roussel as his mentor. This oddly orchestrated work was also his first concerto-style composition. The first piece of instrumental music to feature the cello was the first of the two Duos for violin and cello which appeared in 1927. A cello concerto proper, the first of two (the second is dated 1944/5), followed in 1930.

During 1931 Martinu wrote nine duets for two violins in the first position (the Études faciles). Pastorales and Nocturnes, two sets of pieces for cello and piano, followed, then a Suite miniature (seven easy pieces) for solo cello, and finally Sept Arabesques for either violin or cello alone. The circumstances surrounding the composition of these unpretentious morceaux (they were added to in 1950 and 1953) is obscure, but they were probably intended as teaching material. These trifles exercised little influence on the genesis of the first of the cello sonatas, however. The concertante works had confirmed that Martinu was already adept at exploiting the instrument’s capacity for sonorous expression and its power to sustain a rich, lyrical line.

Although separated from Czechoslovakia, the tribulations of his homeland affected Martinu profoundly, and its occupation by the Germans in 1939 caused him infinite sadness. He found an outlet for his feelings in the Sonata for cello and piano No 1. Apart from a set of Fairy Tales for piano, dedicated to his pupil the ailing Vitezslava Kaprálová, it is the only composition ascribed to that traumatic year. It is dated 12 May.

The feeling of unrest so eloquently expressed in the Double Concerto, completed at the time of Munich, is again predominant in the first movement of the sonata, which for Martinu is unusually dramatic and declamatory. But whether its mood was dictated wholly by outward events has been questioned. Some feel that a more intimate but undisclosed emotional disturbance may have had a hand in its creation. The unusually passionate slow movement lends some credence to this idea, though the final Allegro con brio tends to rebut such an interpretation. The sonata is dedicated to Pierre Fournier who, with Rudolf Firkusny, gave the first performance in Paris one year later on the very eve of the collapse of the composer’s settled world: ‘The last greeting from a better world’, Martinu recalled many years later.

Like many another émigré Martinu found it difficult to adapt to the changes imposed by life in America. Composition did not come readily. A mazurka dedicated to Paderewski (who died in New York in June 1941), the Concerto da Camera for violin, piano, percussion and strings, and the second cello sonata are the only products of his first year in the New World.

Like Dvorák before him, Martinu found friends of Czech ancestry among his new American acquaintances. One of the these was Frank Rybka. Rybka had studied music with Janácek in Brno before going to America in 1912. He had taught in Pittsburgh but was at this time living in Jamaica, Long Island. Through his agency the Martinus found a flat there, and the two families became firm friends. American neighbours who found the composer’s habit of wandering the streets at night peculiar were warned not to stop and talk to him; it was at such times that Martinu gave birth to his ideas.

The Sonata for cello and piano No 2 is dedicated to Frank Rybka, and its character is far removed from that of No 1. Milos Safranék, Martinu’s first biographer, pointed out that it already belonged to the composer’s so-called ‘American period’. By this he no doubt meant that at this time Martinu recognized the need to win over his new public with music that posed fewer stylistic problems and did not strike too deeply into their complex personal psyches; not that this sonata is superficial – it poses many technical problems, particularly of rhythm – merely that its three movements occupy a sunnier, more equable landscape than that of No 1. It is quite believable that it held its own in a programme with Brahms’s Sonata in E minor at its premiere on 27 March 1942 when it was played by Lucien Laporte and Elly Bontempo.

In October 1942 Martinu composed a set of bravura Variations on a theme by Rossini which he dedicated to Piatigorsky, but it was ten years before the last of the cello sonatas appeared. Sonata for cello and piano No 3 was written at Vieux-Moulin near Paris in the autumn of 1952 during the interlude between the composer’s two periods of residence in America. This was a period of transition for Martinu. He had written the Rhapsody-Concerto for viola, a work of extraordinary and sustained beauty, earlier in the year and was moving into the realm of fantasy exemplified by the projected opera La plainte contre inconnu and the Fantaisies symphoniques (Sixth Symphony) of the following year.

The third cello sonata occupies ground somewhere between that of the concerto and the symphony. Its form is fluid. Strict Classical forms never adapted readily to Martinu’s compositional processes and he rarely paid more than lip-service to them. The looser process of constant evolution, his version of ‘fantasia’, was more congenial, and these years were devoted to its consolidation into a compositional method.

Of all of Martinu’s chamber works for cello, the third sonata has established itself most firmly in the affections of performing artists and is consequently the most familiar to the general public. It satisfies the demands of the two players more completely than its companions, but its secret is perhaps that, of the three, it is the most personal yet most obviously Czech in spirit, particularly in the cast of its melodies. It is dedicated to the memory of an old friend, Hans Kindler, to whom seven years previously Martinu had dedicated his orchestral scherzo Thunderbolt – P47. It had its premiere in Washington towards the end of 1952.

This sonata was not Martinu’s epitaph for the cello, however. His very last instrumental composition was another duo for cello and piano, again profoundly Czech in spirit. The Variations on a Slovak folk melody, written at Paul Sacher’s house, occupied him from 14 to 20 March 1959. Fittingly they were given their first performance in Prague in October that year by an old friend, Sasa Vectomov, since when they have become a kind of valediction to their composer, a man of great gifts and wide experience, personally shy and unpretentious. But, above all, Czech.