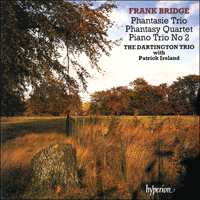 ‘These mellifluous and enjoyable works reveal [Bridge] as, of all British composers of his time, the nearest to Fauré in his aesthetic. Hyperion's recording is outstanding’ (BBC Music Magazine Top 1000 CDs Guide)
‘Even those who do not usually respond to Bridge's early music should be persuaded by this playing; it is of exceptional eloquence and sensitivity. The Hyperion recording is altogether superb, in the demonstration bracket’ (The Penguin Guide to Compact Discs)

Without underestimating Frank Bridge’s achievements in other fields, it was with chamber music that he made his most substantial impact. This recording gives us the opportunity to hear how he developed in this sphere over a period of twenty years.

In June 1907 the second Cobbett Musical Competition was announced in The Musical Times thus: ‘The Worshipful Company of Musicians offers various prizes, under the title ‘Cobbett Musical Competition No 2’, for the composition of a short Phantasy in the form of a piano trio’. Three prizes were offered—£50 First Prize, donated by William Cobbett himself, and £10 Second and Third Prizes donated by H L Sternberg. There were sixty-seven entries and Bridge, John Ireland and James Friskin were the successful entrants.

The significance of Bridge’s continued Cobbett Competition success (his Quartet had won second prize in the 1905 competition) in terms of his stylistic development and the growth of his reputation, should not be underestimated. The 1907 Phantasie for piano trio (his Piano Trio No 1) established him as one of the leading chamber-music composers of the younger generation.

The single span of the Phantasie embraces sonata exposition and recapitulation, separated by andante and scherzo episodes which are linked by rudimentary transitions into an arch-shaped introduction: sonata exposition—andante—scherzo—extension of andante episode to effect a lyrical climax—sonata recapitulation—coda.

It was some months after the adjudication that performances of the prize-winning compositions were arranged. The London Piano Trio was engaged and the three premieres given over a six-month period. Bridge’s winning entry was given the distinction of publication through the Worshipful Company and a first performance at a Musicians’ Society banquet.

Cobbett, who had a number of reservations about the finale of Bridge’s first Phantasie, for string quartet (1905), was in no doubt of the quality of the new work. In a lecture given at the Royal Academy of Music in 1911 he said: ‘Mr Bridge’s Trio is of a remarkable beauty and brilliance and stamps him as one of our foremost composers for the chamber. With a lavishness to which I can recall few precedents, he has provided thematic material more than sufficient for a lengthy work in sonata form.’

Bridge’s third Phantasy was commissioned by Cobbett and given its first performance, by the Henkel Piano Quartet, in 1911. Through his three previous competitions, Cobbett had provided the stimulus for a new repertoire of chamber music from the younger British composers. In commissioning an additional eleven works from the most promising, he furthered his objective of founding a wide-ranging library of chamber music.

Of all the eleven composers—who included Vaughan Williams, Benjamin Dale, York Bowen and Thomas Dunhill—Bridge’s debt to Cobbett, in terms of his musical development and the growth of his reputation, was easily the greatest, particularly in the evolution of the ‘phantasy’ arch-form. Bridge’s three Phantasies are all uncomplicated in their episodic construction, but the Phantasy for piano quartet is the most effective, revealing Bridge’s early style at its finest—refined and eloquent in its musical language and concise in its thematic procedures and symmetrical construction (introduction—A, andante—B, scherzo—C, trio employing the opening theme—B—A'—coda).

The 1929 Piano Trio No 2 is dedicated to Mrs Elizabeth Sprague Coolidge, the American patroness without whose financial support it, and several of Bridge’s other works, would not have been written. Bridge hoped that she would take the Piano Trio under her wing so that the process of international recognition that had already begun with her promotion of the String Quartet No. 3 might be sustained. She had no hesitation in suggesting a performance at the earliest possible date. The date was fixed to coincide with the end of Mrs Coolidge’s European trip (June to November 1929).

Bridge’s first choice of string players was available, and by September Harriet Cohen had been engaged as the pianist. The premiere was given before an invited audience in the Langham Hotel on 4 November 1929.

Although Bridge was pleased with the performance and grateful for the opportunity afforded him through the continued generosity of Mrs Coolidge, he was deeply affected by the tone of two press notices. The personal attack in The Daily Telegraph was especially galling. Herbert Hughes wrote:

This was patently 1929 music—owing a great deal to Scriabin and more to Schoenberg. As it proceeded one wondered whether Mr Bridge had not somewhat forced upon himself this style of writing, whether the great part of this trio had any real meaning, even superficial, to the composer himself. We are, or so it seems to me, faced today, in this present international vogue of atonalism, with a new species of Kapellmeistermusik. Mr Bridge is not the only instance of a composer on this side of the Channel having suddenly adopted a manner (as he did in his recent piano sonata) that bears no recognisable relationship to his own natural development—and, like so many others, he can no longer be regarded as a ‘young British composer’. It must be said that the work was beautifully played and admitted that at no point did it fail to hold the attention of a highly critical audience, even if it was not at all clear what the composer was trying to convey. The idiom is no longer strange, and it should not be hard for a good craftsman to make himself understood.

Bridge’s reaction was immediate and bitter. He wrote to Elizabeth Coolidge:

I see quite clearly that it is going to be increasingly difficult for people who have standardised their ideas as to what music is when they compare my work at twenty-seven and that at fifty, but that there can be any compromise between what is expected by others and what my instinct insists upon is utter impossibility. The last few years have strengthened my mental powers—such as they are—to a degree that leaves them untouched by any outward manifestation. You will admit that it is a difficult moment when one reads the kind of personal slight that Hughes finds pleasure in doling out ad infinitum, but the effect is a momentary one. A kind of superficial sting in the flesh, but no more, and so on with the next work.

Benjamin Britten recalled that Bridge was also extremely distressed by comments printed in The Musical Times following the second London performance in April 1930:

It seems evident that he has made common cause with the advocates of modernity and put technical interest before aesthetic pleasure … My impression is that he is bartering a noble birthright for less than a mess of pottage.

At Mrs Coolidge’s instigation the work was taken that autumn on a tour of the USA with the same players, and the enthusiasm of the audiences made up somewhat for the cold reception it had received in England.

Later critics have found it considerably easier to come to terms with the work, and it is now widely thought to be one of Bridge’s most satisfying and imaginative achievements.