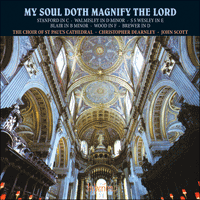 My soul doth magnify the Lord

Settings of the canticles, the Magnificat and Nunc dimittis, have played a prominent part in the Office of Evensong since the Reformation. Cranmer’s original Book of Common Prayer of 1549 established the classic pattern for the Anglican Office of psalm–lesson–canticle–lesson–canticle. This pattern survived all the liturgical revisions and upheavals and was reiterated in the definitive 1662 version, which is still adhered to today. The form of Evensong resulted from the fusing together of elements from the Roman Offices of Vespers and Compline, though the liturgical pattern of psalms followed by paired lessons and canticles differs both from its Roman progenitors and from the Lutheran services.

The first canticle of Evensong, the Magnificat, acts as a liturgical pivot, providing a transition between lessons from the Old Testament and the New Testament. The Magnificat, whose text is found in Luke 1: 46–55, is a hymn of praise expressing the joy and thanksgiving of the Virgin Mary following the Annunciation.

The Nunc dimittis or ‘Song of Simeon’, the second canticle of Evensong, takes its text from Luke 2: 29–32, and acts as a salutation to the arrival of the New Testament message. The words are those uttered in prayer by the aged Simeon who, having witnessed the Presentation of Jesus at the Temple, expresses his faith in God’s promise of Salvation and contemplates his approaching death.

Except for the anthem (which is, strictly speaking, extra-liturgical), the canticles have afforded the greatest opportunity for musical development within the Anglican rite. The stylistic foundations of the settings most familiar today from the late nineteenth and early twentieth centuries were established in large part by Samuel Sebastian Wesley and Thomas Attwood Walmisley, two of the most important and influential figures in the history of English church music. The finest achievements of both these men in the setting of the Evening Canticles are included in this recording, which presents six of the most inspired and well-loved settings, spanning from the mid-1850s to the early 1920s.

Though Sir Charles Villiers Stanford (1852–1924) has gained universal recognition as a composer of church music, it was primarily in his capacity as teacher of composition at the Royal College of Music from 1883 that he made his most important contributions to the heritage of English church music. Three of his more illustrious pupils were Charles Wood, Herbert Howells and Ralph Vaughan Williams. Stanford was highly cultured, widely travelled and greatly respected in academic circles, and as a composer he was prolific in all genres, both sacred and secular. Stanford considered the Magnificat and Nunc dimittis in C (1909), which forms part of the Great Service in C, Op 115, to be his finest setting. Certainly, it has an ethereal beauty and an air of simplicity which sets it apart from his other services. The final chord of the Gloria reverberating around St Paul’s Cathedral on this recording seems to convey a sense of pure exaltation, a consummation of a feeling present throughout the Service.

Besides Wesley, Thomas Attwood Walmisley (1814–1856) was the composer most instrumental in raising the tradition of English church music out of the mire into which it had sunk earlier in the nineteenth century. Walmisley’s exceptional abilities as choir trainer and organist led him to Cambridge in 1833, where he was appointed joint organist at Trinity and St John’s Colleges. He was elected Professor of Music at Cambridge in 1836. As a composer, Walmisley left to posterity a sizeable and varied corpus of works. However, with the exception of one isolated composition of pure genius, the Magnificat and Nunc dimittis in D minor, his music has fallen into obscurity. Composed in 1855, this late work is the most mature of all Walmisley’s service settings. Though reminiscent of a Tudor faux bourdon setting in its construction, the adventurous harmonic language, expressive yet un-sentimental approach to text-setting, and the brilliance and independence of the organ-writing make it a most original and memorable Service.

Samuel Sebastian Wesley (1810–1876) has been acknowledged as the foremost church composer of the mid-nineteenth century. A prolific composer and leading organist, he secured a great number of prestigious appointments. The Evening Canticles in E major, composed whilst he was organist at Leeds Parish Church between 1841 and 1844, are a towering monument in the history of English church music. Although its sheer physical size has restricted frequency of performance in a liturgical context, Wesley’s Service became a direct model for church composers later in the century. In his hands, the familiar texts became vehicles for a whole new wealth of expression and imagination. Yet, for all his boldness in the treatment of key relationships and in his rather liberated writing for the organ (which was an innovation of some considerable importance on his part), he never strayed from his impeccable accuracy with regard to word-setting. This Service bears all the hallmarks of his art: sweeping melodies, rich harmonies, grand climaxes and above all, a supreme confidence in the handling of vocal textures.

The career of Hugh Blair (1864–1932) was, by all accounts, an eventful one. Having studied the organ at Worcester Cathedral, he became organ scholar at Christ’s College, Cambridge, in 1884 and then returned to Worcester in 1887 as assistant organist. He eventually succeeded Dr Done as organist of Worcester Cathedral in 1889, but was forced to resign in 1896, reputedly for drunkenness. Moving to London, he became organist of Holy Trinity, Marylebone, and conductor for Battersea Borough Council. From 1910 to 1915 he conducted the London Church Orchestral Society. The Evening Service in B minor, composed in 1887 for Worcester Cathedral, is the most familiar of Blair’s numerous settings. In its revised version of 1892 (edited by Ivor Atkins, Blair’s successor at Worcester), it is an elaborate and expansive setting, memorable for its rich chordal spacing, lyrical melodies and ethereal harmonic passages. The Nunc dimittis, written in a simple homophonic style, is a delicate and sustained evocation of the text.

During his later years, Charles Wood (1866–1926) became increasingly active as a church composer, and indeed most of his church music, including the Evening Canticles in F, was written after the turn of the century. Wood’s vast liturgical ouput, which continues happily in the tradition established by Wesley and continued by Stanford and Parry, includes no fewer than twenty settings of the Evening Canticles and some thirty anthems. The Magnificat and Nunc dimittis in F, written for King’s College, Cambridge, is scored for double choir and was published in 1920. The Magnificat is remarkable not only for its tremendous variety of vocal textures, but also for its richly expressive harmonies, sublimely beautiful verse sections, and imaginative word-painting. The Nunc dimittis is founded upon a melody from the 1549 French Psalter. The Gloria is without doubt the most full-blooded of the doxologies on this recording, and is a fitting climax to this most pictorial of settings.

Sir (Alfred) Herbert Brewer (1865–1928) composed his Evening Canticles in D for the 1927 Three Choirs Festival, held that year in Hereford Cathedral. A close association with this Festival began in 1896, when Brewer was appointed organist at Gloucester, a Cathedral in which he had served as a chorister. At the turn of the century, Brewer was fortunate enough to have both Howells and Gurney in his choir. As a composer, Brewer explored all musical forms, but he seemed more at home in the concert hall than in the cathedral. Like Stanford’s Service in C, Brewer’s setting is concise; the Nunc dimittis in particular exploits a simple, direct chordal style which aptly reflects the tranquility of the text. The Magnificat is more melodic in conception and is unified by a certain amount of phrase repetition and by a pervasive triplet figure. This Service also exists in a version with orchestral accompaniment.