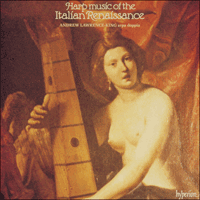 Harp music of the Italian Renaissance

Like most instruments, the harp has become louder, larger and more mechanical as it has developed from simple medieval instruments with a dozen or fewer strings to the modern, five-and-a-half-octave, double-action pedal harp. The massive increase in tension associated with the complex (and heavy) mechanism for altering the pitch of the strings makes the modern concert harp as different from its Baroque predecessors as the piano is from the harpsichord.

The twenty-five-string ‘Gothic’ harp was played throughout the Renaissance but around the middle of the sixteenth century extra strings were added, making the instrument fully chromatic. The theorist Vincenzo Galilei (father of the astronomer) described the ‘arpa doppia’ (double harp with twice the usual number of strings) in his Dialogue on Music (1581): the strings were arranged in two parallel rows, corresponding to the white and black keys of a keyboard; the rows exchanged function halfway up the instrument so that each hand had the diatonic (white-note) row conveniently placed; the ‘black notes’ were played by poking a finger between two strings in the main row to reach a chromatic string beyond. In this way the harp was capable of extreme chromaticism long before the invention of pedals, although (like all early instruments) it was easier to play in ‘normal’ keys, close to C major, where most of the notes would lie in the main row of strings.

For the same reason as the chitarrone was developed from the Renaissance lute, so harps were made larger and provided with additional bass strings in order to play basso continuo. By around 1600 the ‘arpa doppia’ was ‘double’ not only because it had two rows of strings but also because it was very large and had a low-bass register (as in ‘double’ bass or ‘double’ bassoon). The string-length was much increased but the tension was still relatively low since the whole frame, having no rigid metal mechanism encumbering it, was light and free to resonate.

Like the chitarrone, the ‘arpa doppia’ was primarily an accompanying instrument. Its powerful bass made it ideal for early-Baroque continuo, and it combined the flexibility and tonal palette of the theorbo with the compass of a keyboard. Many seventeenth-century title pages suggest the harp as an alternative to lute or keyboard accompaniment, and writers such as Praetorius and Agazzari included the harp in their instructions on playing continuo.

The harp, unlike the lute or harpsichord, did not have a large amateur following to create a market for published solo music. Nevertheless there were a number of virtuosi who achieved international fame for their mastery of the ‘arpa doppia’. In Rome, Orazio Michi was considered second only to Frescobaldi as a musician, and unrivalled as a harpist. His technique of damping the strings to prevent the aural chaos caused by the harp’s long resonance was particularly important. The Neapolitan school of composers associated with Macque included Trabaci and Mayone (harpists), Luigi Rossi (whose wife and brother both played the instrument) and Rinaldo dall’Arpa (an employee of Gesualdo).

The harp and the lute had long been associated with love songs and dance music, and the seventeenth-century virtuosi were famous for ornamented transcriptions of well-known madrigals. An account of a young Sicilian girl playing ‘the most beautiful and artificial pieces by the most famous composers’ describes how she ‘ran quickly from the highest strings to the lowest’ and played ‘with such pleasant and artful little scales and fugues’. (Her harp was apparently so large that she had to stand on a chair in order to tune it.)

Dramatic arpeggios across the whole compass of the harp became a cliché, especially as an opening device. Composers also exploited the chromatic potential of the instrument and its capacity for turns, trills and echoes, as recommended by Agazzari and Praetorius. There is a famous solo for the ‘arpa doppia’ in Monteverdi’s opera L’Orfeo, and keyboard publications by Trabaci and Mayone include pieces specifically designated for the harp (‘per l’arpa’). There is also a hidden repertoire of pieces written by harpists which, although not actually marked ‘per l’arpa’, seems to be conceived in terms of the harp. Intervals too wide for the keyboard, trills arranged to suit the tuning of the ‘arpa doppia’ and similarity to known harp pieces are some of the clues to such compositions. In any case, Renaissance sources unanimously agree on the suitability of keyboard and lute music for the harp, not to mention the widespread practice of taking over repertoire from any other instrument.

Most of the music of this recording is Neapolitan, reflecting Naples’ importance as the centre of Italian harp-playing. Much of it is by Giovanni Maria Trabaci, singer, harpist and (with Ascanio Mayone) organist at the Spanish Chapel Royal in Naples. His 1615 book Il secondo libro de ricercate & altri varij capricci was published shortly after he succeeded Macque as maestro di capella.

The Toccata Seconda & Ligature is a tour de force of idiomatic harp writing with its dramatic opening, marked chromaticism and typically Neapolitan variety of texture. Ancidetemi pur is a virtuoso transcription of a plain four-part madrigal by Arcadelt. The original lines are scarcely recognizable beneath Trabaci’s ornaments and divisions, with scales, trills and echoes just as described by Agazzari. In his Partite sopra Zefiro, Trabaci marks the second, eighth, ninth and eleventh variations ‘per l’arpa’. The tenth is marked ‘con due fughe’, and the last partita has two parts ‘in canone senza regola’. Although the galliards, like the harp pieces, are printed in score, Trabaci says that they could also be played by an ensemble of viols or violins. He does not limit himself to the strict galliard measure, but alternates sections in dance rhythm with imitative writing.

Cesare Negri’s dance manual Le Gratie d’Amore presents its tunes (mostly very simple) in both staff notation and lute tablature, so that all kinds of instruments could provide music for the dancers. In addition to a large number of short dances and balletti, there are a few large-scale pieces with a developed musical structure. La Barriera is a choreographed tournament, culminating in a mock battle, whereas Brando per Quattro Pastore e Quattro Ninfe evokes an idealized pastoral world through a medley of Renaissance tunes (including a galliard version of So ben mi ch’a buon tempo).

Vergine Bella is another transcription of a vocal original, in this case a devotional madrigal, or ‘lauda’, by the Mantuan composer Bartolomeo Tromboncino. The restrained divisions leave intact the polyphony and the form of the original with its closing ‘Amen’.

Ascanio Mayone’s Toccata Prima is in the same Neapolitan style of extreme contrasts as that of his colleague Trabaci: a style that was to find its culmination in the madrigals of Gesualdo. The Gagliarda Prima comes from a Neapolitan manuscript which includes music by Trabaci, Macque and Gesualdo. Fabrizio Fillimarino was a lutenist in Gesualdo’s academy, and the sour chromatics of his opening motif add a distinctly Neapolitan touch to the Canzon Cromatica. This piece is found in a manuscript copied by the composer Luigi Rossi for Macque, his teacher.

Rome, where the brilliant Orazio Michi played for Cardinal Montalto, is represented by the present author’s own transcription of Amarilli mia bella (surely one of the ‘most beautiful and artificial pieces’) in the ornate style of seventeenth-century harp playing. Giuliano Caccini, sometimes referred to as ‘Giulio Romano’, studied in Rome as a singer, lute player and harpist before entering into service at the Medici court in Florence.