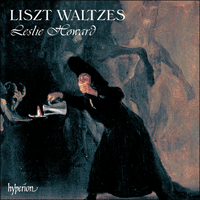 ‘For sheer virtuosic panache and the ability to translate Liszt's ever-changing moods, Leslie Howard must be heard’ (Hi-Fi News)

Aside from juvenilia, a few album-leaves, early versions and works based upon other composers’ music, these works represent the complete original concert waltzes for piano by Liszt. The Ländler and Albumblatt are given by way of encores. The third of the Trois Valses-Caprices, S214, is based on themes by Donizetti (Leslie Howard has recorded it for Hyperion on ‘Rare Piano Encores’, CDH55109). The Bagatelle without tonality was originally to have been the Fourth Mephisto Waltz. The Petite Valse favorite is omitted since it is merely an earlier version of the Valse-Impromptu. Two recently-published additions to the Mephisto Waltz No 1 are included here. Liszt left three pages of sketches for an Andantino he wished to add to the Mephisto Waltz No 4. Leslie Howard completed the piece in 1978 for the Liszt-Bartók cycle at La Scala, Milan, and this version, which is dedicated to Alfred Brendel, is published by Basil Ramsey.

We are accustomed to look benignly upon the shortcomings of the great: if Johann Sebastian Bach should write such a clumsy fugue as the example in the B flat Capriccio we are amused rather than concerned at the, genius’s early struggles. But we are less charitable when confronted with achievement of less predictable quality; longueur, banality and technical error even in so great a man as Schubert have not been exempt from unsympathetic criticism. In Liszt’s case we have acquired, in the century since his death, a complete critical mythology which has successfully prevented the investigation and performance of many of his finest works. Anyone who is pushing back creative frontiers in a prodigious output and over a long life is bound to produce an uneven body of work where sometimes a sense of experiment outweighs one of achievement. Yet, despite the enormous quantity of the Liszt œuvre—well over a thousand pieces—there is remarkably little without interest. In order to comprehend and eventually pardon Liszt’s imperfections the critical mythology must be attacked. That Liszt was a powerful character and an influential man is beyond dispute. That younger composers from Smetana and Glazunov to Grieg and Macdowell and older contemporaries like Schumann, Berlioz and Wagner asked and received Liszt’s assistance is testimony to esteem for the man’s music as much as for his generosity. That Liszt propagated the works of other composers old and new by means of piano transcriptions or fantasies need offend no-one—the overtly audience-slaying nature of a number of these works is not, in any case, an essentially unpleasant phenomenon. That Liszt’s character was so multi-faceted as to reflect itself in an enormous range of styles is at once an advantage and a defect. But the present writer for one would rather have a hero who tried and didn’t always succeed than one who took the eternal safe option. It is essential to respect the sincerity of Liszt’s aims: the flatulent and intellectually pusillanimous epithets ‘Mephistopheles disguised as a priest’, ‘Virtuoso, Prophet, Charlatan’, ‘Thunder, Lightning, Mesmerism, Sex’ or ‘The Tragi-Comedy of a Soul divided against itself’ (Ernest Newman at his most miserable) are, at the most charitable, corrosive barnacles of half-truth and small help to the listener. The conflict between the spiritual and the material is as germane to art as it is to life, and if Liszt’s nobler aspirations are occasionally tainted with saccharine, or his worldlier offerings sometimes afflicted with a serious overdose of rhetoric, there seems no need to accuse him of posturing in order to explain his lapses from greatness.

Performances and recordings of the canon of Chopin waltzes are anything but a rarity; the Liszt waltzes, not quite as homogeneous a compendium, are seldom encountered in toto, but form a collection properly comparable to Chopin in musical worth, and cover a rather broader scope. The reasons for the comparative neglect may be: that the four Mephisto Waltzes are physically draining to play consecutively; that the avant-garde qualities of the later works were at first a significant hurdle to conservative audiences; and that some of the music has been very difficult to obtain until quite recently. (A word here about Liszt editions: almost all of the old editions are notoriously unreliable or full of deliberate alterations to the text, often made by Liszt pupils—such as the famous erroneous D sharp in bar 763 of the First Mephisto Waltz, the gratuitous omission of the tie over the last two notes of the Valse oubliée No 1, and a plethora of mistakes in the Mephisto Waltz No 3. Unfortunately, even the Breitkopf and Russian collected editions and the Liszt Society publications are not immune from considerable quantities of error, and the Neue Liszt-Ausgabe, which ought to be perfect, contains many silly misprints as well as failing to remark possible slips of Liszt’s pen, even by way of a footnote—as in the obviously mistaken trill in bar 57 of the Mephisto Waltz No 3.)

The Valse-Impromptu, Valse mélancolique and Valse de bravoure are by turns light and witty, delicate and languid, brilliant and cheerful works from Liszt’s early years as a concert performer, but all revised and eventually published in 1852 during Liszt’s time at Weimar. Although they are by no means among Liszt’s most important works, they are all full of charm and originality, and their neglect seems inexplicable.

Twenty years separate the famous Mephisto Waltz No 1 from its companion pieces of the 1880s, but the work marks a point of transition to Liszt’s later style. Early critics were shocked by the daring harmonies, especially at the beginning where a devilish pile of fifths is assembled. The original title is Dance in the Village Inn, and refers specifically to a long passage (quoted in the score) from Nikolaus Lenau’s dramatic poem Faust. In the orchestral version the waltz is preceded by Der Nächtliche Zug (The Nocturnal Procession) and the whole work is called Two Episodes from Lenau’s ‘Faust’. Unlike the piano duet version, which is a straight forward transcription of the orchestral work, the solo version is really quite an independent piece. It is not known when Liszt wrote the two extra passages, but this was certainly a habit of his later years when, probably whilst teaching his music to aspiring pianists, he made a good many slight additions and alterations to the published versions—which, happily, may be consulted in the Neue Liszt-Ausgabe.

The Mephisto Waltz No 1 (piano version) is dedicated to Karl Tausig; the Mephisto Waltz No 2, in both the concurrently written piano and orchestral versions, is dedicated to Camille Saint-Saëns. The second waltz begins, and dares to end, with the unresolved interval of a tritone—the familiar diabolus in musica, whilst the piece proper is, for all its spiky dissonance, firmly in E flat until the expected climax is shattered by the return of the B–F interval, and the piece ends unmistakably and disconcertingly on B, rather than in B! Anticipations of the harmonic world of Busoni, Skryabin or Bartók continue in the Mephisto Waltz No 3 (which, like its successor, exists only as a solo piano piece). Like its companions, it has the devil dancing a waltz where the groups of three move by so quickly that a larger rhythm of four is established, and indeed the third waltz abandons all reference to triple time in the dreamlike passage towards the end. Tonally, the piece is constantly pulled between F sharp major, D minor and D sharp minor.

The reference to the Faust legend is maintained throughout all of the Mephisto music, but the seventy-year-old Liszt’s Mephistopheles is a grimmer, more unrelenting figure than that of the Faust Symphony or the Mephisto Waltz No 1. The Bagatelle sans tonalité (what a title, in 1885!) and the Mephisto Waltz No 4 remained unpublished for eighty years. It’s not certain exactly when the Bagatelle was written, but since it bears (confusingly) the title of Fourth Mephisto Waltz it must postdate the Third. Whilst the piece is not especially dissonant, it is certainly very wayward in any kind of feeling for a tonal centre and ends with an upward-rushing set of diminished sevenths. The piece for which the title Mephisto Waltz No 4 is nowadays exclusively reserved resembles the second in its possession of an introduction and coda which defy the basic key. Here the piece is in D, but begins and ends on C sharp. This similarity was an encouragement, when completing the sketches for the contrasting section, to refer to the main material during the Andantino, and to recapitulate a portion of the Allegro before Liszt’s coda.

The four Valses oubliées are all wistful late works and, as their marvellous title suggests, conjure up images of times and joys past. Although they are as modern in their harmonic style as the late Mephisto music, they speak in a much gentler language. The first was an immediate success, and has remained so. Liszt had it reprinted shortly afterwards with the second, which refers nostalgically to a passage from the Valse de bravoure, and the third, with its almost impressionistic colourings and repeated chords. The fourth became almost permanently ‘oubliée’ and the first publication was not until 1954. Like many of the visionary pieces of Liszt’s last years, the ending is enigmatic: a beautiful irresolution of a striving dominant seventh over the immovable keynote.