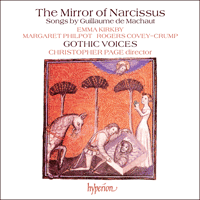 The Mirror of Narcissus

The story of Narcissus, who fell in love with his own reflection, fascinated medieval courtiers, for narcissism was the essence of court life and art. All was self-regarding, luxuriant, elitist; and few courtly artists were more concerned with their own reflection than the celebrated poet and composer Guillaume de Machaut.

We know a good deal about the man who looked into the mirror. He was born around 1300, and his career opened with high affairs and travel when he joined the household of John of Luxembourg, King of Bohemia, c1323. He served the king as his secretary until the disaster at Crécy where the chivalrous monarch was slain. During these years of service Machaut became established as a leading poet (one of his foreign admirers was Geoffrey Chaucer) and as the foremost composer of the French Ars Nova. Some time around 1340 he took up a canonry at Rheims—perhaps moving into the spacious house on the Rue de la Pourcelette (now the Rue d’Anjou) which he is known to have occupied in 1372—and until his death his services were sought by the highest patrons of France including John, Duke of Berry, and Charles of Navarre, the future King Charles V.

Machaut wanted his life’s work to be seen as one luxurious artefact of poetry and music, and he arranged for it to be copied as such—an exceptional thing for a fourteenth-century composer to have done. When we turn the pages of the manuscripts which descend from Machaut’s own ‘livre’ we see luminescent paintings, page after page of fine penwork lavished on music and poetry of the highest finish—calligraphic beauty enveloped in an aura of latent sound. Machaut looked into the mirror of Narcissus and an idealized, gilded image of the lover-artist looked back. Machaut fell in love with the reflection and his passion drove him through a long and immensely productive life.

By the standards of any age, Machaut is a compelling and extraordinary composer. His harmonies range from the mellifluous, through the exotic, to the bizarre; rich chords alternate with pungent dissonances which often resolve in the most unexpected ways; his melodies surge and leap. All of these things make him perhaps the most difficult composer of the Middle Ages, but also one of the most enticing; he has so much in common with the composers of today.

This is the first recording to present fourteenth-century music in exclusively vocal performances. In recent years it has become clear that this manner of performance was well known in late-medieval France. The director of Gothic Voices wrote an article advocating this method in 1977, pointing to the evidence in a treatise by Guillaume de Machaut’s nephew, Eustache Deschamps. Since then several major studies have been published which contain supporting evidence for the practice:

Craig Wright: ‘Voices and Instruments in the Art-Music of Northern France during the Fifteenth Century: a Conspectus’ Report of the Twelfth Congress (of the International Musicological Society), Berkeley, 1977 edited by D Heartz and B Wade (Kassel, 1981), pp 643–649.

David Fallows: ‘Specific Information on the Ensembles for Composed Polyphony, 1400–1474’ Studies in the performance of late-medieval music, edited by S Boorman (Cambridge, 1983), pp 109–159.

It appears to have been quite acceptable in the Middle Ages for a man to sing a song written from a woman’s point of view—and, presumably, vice versa (see Early Music 10/4 October 1982, p 447).

The texts given here follow the Schrade edition, except for the following points: (1) the fragmentary text to the tenor of track 3 has been reconstructed; (2) two small emendations have been made, in Dame, a qui (verse 1, line 5) and Dame, de qui toute ma joie vient (verse 2, line 7): these are sanctioned by the editions of Chichmaref and Hoepffner respectively (see below); (3) accents and cedillas have been introduced sparingly, largely on the lines of the Chichmaref edition; (4) the ligature w (in weil, wet) is transcribed as vu; (5) some additional punctuation has been inserted.

The French texts have been translated and prepared by Stephen Haynes of Jesus College, Oxford.