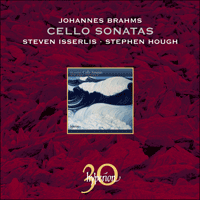 Twenty-one years ago the young Steven Isserlis, for his debut recording, made a disc of the Brahms cello sonatas which received superb reviews and became one of Hyperion’s early best-sellers. Now regarded as one of the great cellists of our time, Steven has revisited these works—this time in partnership with his equally high-profile colleague Stephen Hough—to give us his latest thoughts on these masterpieces.

Described by Isserlis in his eloquent booklet notes as cornerstones of the repertory, Brahms’s two cello sonatas perfectly convey the passion their composer had for the instrument which he mastered in his youth.

This new recording also includes charming pieces by Dvořák and Suk, both of whom were influenced by Brahms.

‘There is no doubting the sweep and passion, or the tenderness and intimacy, of their performance. These two outstanding musicians give an equally fine account of the earlier E minor sonata. In both works, and in some pleasing miniatures by Dvořák and Suk, they interact with the combined sensitivity and freedom of true chamber-music players’ (The Sunday Times)
‘One of the most happily balanced chamber music discs I have auditioned in some time, this partnership between Steven Isserlis and Stephen Hough, provides some thoroughly idiomatic Brahms sonatas, played with alternate tenderness and fury, as each piece requires. Hough's piano part proves as ravishing as Isserlis' commanding cello; and in a medium in which competition abounds … that is saying something. The Adagio affetuoso of the F major Sonata may warrant your attentions at repeated hearings … this disc, while not specifically designated SACD, packs a resonance and liquid punch competitive with the finest sound imaging. Ravishing playing from the first notes, these collaborations testify to a meeting of kindred spirits on all levels. The liner notes by Isserlis capture the tenor of the pieces with a propriety bordering on veneration’ (Audiophile Audition, USA)

Brahms was generous to cellists: in addition to the two monumental sonatas on this recording, there are innumerable glorious moments in his chamber and orchestral music when the cello sings forth as only a cello can. Perhaps part of the reason for his predilection is that in his youth he had studied the instrument quite seriously, to a level where he was able to tackle one of Romberg’s difficult concertos; he might have gone even further if his teacher hadn’t vanished, taking Brahms’s cello with him. At the age of eighteen, he is supposed to have written a Duo for cello and piano (if it did indeed exist, it was no doubt consigned to Brahms’s fireplace, along with so many other of his early – and even mature – works). The sadness is that he never wrote a cello concerto; this is doubly frustrating when one reads of his reported reaction on hearing Dvorák’s masterpiece: ‘Had I only known that such a cello concerto could be written, I could have tried to compose one myself!’ There is some compensation, of course, in the cello part of the Double Concerto with violin, Op 102; and Brahms did have the grace to apologize to his favourite cellist, Robert Hausmann, for having brought the violin in and thus not having properly fulfilled Hausmann’s request for a solo concerto.

But these two marvellous sonatas, dating from very different times in Brahms’s life, are invaluable assets to the cello and piano repertoire, almost indisputably the most important cello sonatas from the second half of the nineteenth century. The Cello Sonata No 1 in E minor Op 38 was started in 1862, when Brahms was not yet thirty, with the finale being added to the long-completed first two movements in 1865. This, his first surviving duo-sonata, is an important work, in some ways a turning-point. His previous sonata had been the Third Piano Sonata, Op 5, a work of tempestuous youth, written in 1853 and prefaced by a quotation from the romantic poetry of Sternau. The cello sonata is utterly different; it is almost an ‘historical sonata’, its roots firmly planted in the music of the past – as if Brahms was turning his back on his wild young self. The only obvious quotation is from Bach’s Art of Fugue (although the main theme of the menuetto bears a strong resemblance to that of the scherzo of Beethoven’s famous Cello Sonata in A major). This is Brahms staking his claim as the greatest ‘classical romantic’ composer of chamber music, a worthy successor to his heroes from other epochs.

The first movement, with its glorious sunset coda in E major (Brahms was the master of musical sunsets) is linked to the other two movements chiefly through the dominance of the expressive minor sixth that makes its first appearance in the second bar of the work, and continues throughout the sonata. The second movement, a charming minuet and trio, seems to pay nostalgic tribute to the world of Mozart – or perhaps to that of Schubert, with whose music Brahms was somewhat obsessed at this period. The last movement, a robust mixture of fugue and sonata form, takes its main theme from Contrapunctus 13 from the Art of Fugue – as if Brahms is looking further backwards in time as the sonata progresses.

If the First Sonata shows Brahms the young man presenting his credentials as a scholar and a mature gentleman, the Cello Sonata No 2 in F major Op 99 is the work of an older man composing music with all the passion and sweep of youth. Written – along with the Second Violin Sonata and Third Piano Trio – during a productive summer in Switzerland in 1886, the F major Sonata was composed for Hausmann, who was renowned for his large and virile tone. The first movement is extraordinarily bold, the two instruments pitted against each other in a wild, storm-tossed sea of tremolandi. Curiously, the slow movement, in the near-but-unrelated key of F sharp major, may derive from a discarded movement originally written for the E minor Sonata. That movement is now lost, but there are a couple of clues that at least suggest a connection; the similarity of the third subject of this slow movement to that of the E minor’s first movement, and the importance of the minor sixth in this middle section and coda, are striking – perhaps too much so to be coincidental. The rich style, however, is definitely late Brahms; if this movement did originate in an earlier work, he must have done some extensive revision before incorporating it. The Allegro passionato is a wonderfully powerful and dark scherzo; a friend of Brahms’s wrote to him (rather irreverently) that she could detect him here ‘humming and snorting continually’ – a pleasant image. The last movement, like that of the Second Piano Concerto, is almost startling in its lightness of touch, unexpected within this massive framework.

Not everybody was totally convinced by the premiere, given in Vienna by Hausmann and the composer in November 1886. ‘What is music, today, what is harmony, what is melody, what is rhythm, what is form’, wrote Hugo Wolf in the Wiener Salonblatt, ‘if this tohuwabohu [total chaos] is seriously accepted as music? If, however, Herr Dr Johannes Brahms is set on mystifying his worshippers with this newest work, if he is out to have some fun with their brainless veneration, then that is something else again, and we admire in Herr Brahms the greatest charlatan of this century and of all centuries to come.’ Hmm … perhaps it’s no wonder that Wolf ended his days in a mental asylum. But cellists, too, complained, concerned about the difficulty of making themselves heard over the piano’s tremolandi in the first movement; a story is told of some less-than-distinguished lady cellist playing it through with Brahms, and complaining of being unable to hear herself. ‘You were lucky!’ was Brahms’s caustic response. (This story is also told about the last movement of the E minor Sonata; it is true that both movements need careful handling from both players from the point of view of balance.) Today, however, the F major Sonata is quite rightly held as a highpoint in late nineteenth-century chamber music.

Brahms, with his sardonic tongue, was not always kind to younger composers (one, on whom he had been particularly severe, suffered a major nervous breakdown, boarding a train and pointing a pistol at an unfortunate passenger who was about to light a cigar, forbidding him to light up ‘because Brahms had filled the coach with dynamite’); but on the other hand, he could be wonderful to those whom he liked and respected. Antonín Dvorák was perhaps the most famous recipient of Brahms’s support; but Dvorák’s favourite pupil and son-in-law Josef Suk also benefited from it in Brahms’s last years, dedicating his fine G minor Piano Quintet, Op 8, to the older master in gratitude. Suk’s Ballade in D minor Op 3 No 1 (written in 1890) and Serenade in A major Op 3 No 2 (composed six years later, surprisingly) are his only works for cello and piano; this is a pity, since he writes for the combination with a passion and lightness that give these pieces a unique, unmistakably Czech charm.

Dvorák’s Cello Concerto is probably the most celebrated of all works for the medium; far less well known is his early concerto of 1865, which he never orchestrated or revised. There are also a few works for cello and piano: arrangements (rather unsuccessful, in this writer’s opinion) of two – or one-and-a-half, to be more precise – of his own Slavonic Dances for cello and piano; a posthumously published Polonaise in A major; and the works on this disc. (There was also a Sonata for cello and piano in F minor, written at the beginning of the 1870s – long since vanished, alas; and tantalizing sketches for another Sonata and for a Sonatina, dating from 1893.)

The Rondo and Waldesruhe (both later orchestrated) were written to be played during a tour with which Dvorák bade farewell to his native land before his departure for a long stay in America in 1892. The cellist was Hanus Wihan, for whom Dvorák was to write his B minor Concerto and who would probably have given the first performance of that masterpiece had he not stupidly insisted on his right to insert his own rather horrific cadenza. Waldesruhe (Klid in Czech, Silent Woods in English) was arranged by Dvorák from one of a series of six piano duets he had written in 1883–4, entitled ‘From the Bohemian Forest’, published as Op 68. The great Czech conductor Václav Talich observed that ‘Dvorák knew how to listen to nature’; and one can certainly hear it in this piece. The peaceful woods are heard at dusk; we then hear them awakening to a new day, emerging vibrantly to life, before settling down again for the night. In the Rondo in G minor Op 94 one is tempted to think that elves have emerged from that same forest; they dance, sing love-songs and then scamper off again to their elferies. Interestingly, there seems to have been a Brahms connection with the Rondo: in 1894, Dvorák wrote from New York to a friend telling him that his newest overtures had been published in New York. ‘The Dumky too’, he continued, ‘– and the Rondo for cello – Brahms himself was kind enough to correct the proofs and I must thank him for doing so’. Kind indeed! Because he knew that sending the proofs out to Dvorák in New York would have delayed publication, Brahms had offered to perform this menial task for his younger, less famous colleague – a touching example of true friendship between composers.