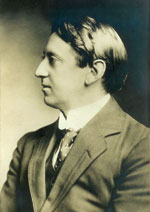 born: 22 February 1884
died: 23 November 1961
country: United Kingdom
The pigeon-holing mentality may always have been with us in one form or another. The Swedish symphonist Franz Berwald became ‘The Berlioz of the North’, just as Bruges is sometimes compared in similar terms with Venice, or St Petersburg with Buenos Aires. ‘Wagner is the Puccini of music’, allegedly wrote J B Morton with mischief firmly in mind, and the jibe has been widely quoted since, both ways about. In similar vein, York Bowen has acquired an ‘English Rachmaninov’ label. Although there is some demonstrable justice in this where the fifth and sixth piano sonatas are concerned, it represents but a part of the truth and oversimplifies the climate of Bowen’s formative years.

Edwin Yorke Bowen was born on 22 February 1884 at Crouch Hill, London, the third son of the founder of Bowen & McKechnie, whisky distillers. After piano studies with Alfred Izard at Blackheath Conservatoire, in 1898 Bowen won the Erard Scholarship of the Royal Academy of Music, with which he was to remain associated for the rest of his life. Dropping his baptismal name and the ‘e’ of ‘Yorke’ early in his career, he became a devoted student of the famously eccentric Tobias Matthay (1858–1945).

Bowen was also an accomplished violist and horn player, in the latter capacity joining the regimental band of the Scots Guards at the start of the Great War. Invalided home with pneumonia in 1916, he became one of many for whom the harsh realities of the time brought artistic disappointment. Having married in 1912, Bowen spent his remaining years in faithful service to the RAM as a professor of piano, where, endearingly, his earlier discarding of ‘Edwin’ gave rise to the affectionate nickname ‘Uncle Yobo’ among generations of students. He died suddenly in November 1961 during a brief shopping excursion from his home, active to the last as a pianist and pedagogue, but also as a composer whose idiom had remained largely unaffected by the passage of years since his first successes. In this respect he invites comparison with his exiled Russian counterpart Nikolai Medtner.

When Bowen left the RAM in 1905 Liszt had been dead for only nineteen years and the reputations of many of his illustrious pupils were at their zenith. One must consider Liszt’s impact in terms of both pianistic innovation and personal charisma, adding to that a sense of the heady aesthetic which had led to such conceptions as Liszt’s Faust Symphony, Wagner’s Tristan, and the early tone poems of Richard Strauss. It is then easy to sense the zeal and excitement from a shared ideal which gripped many of Bowen’s generation. (‘Superb! I feel like climbing up the pillars’, exclaimed Holbrooke to the Bantock family after a London appearance by Strauss conducting his own music.) Disillusioning obscurity had not yet confronted them with Debussy’s eventual rejection of the Wagnerian ideal as ‘the twilight mistaken for the dawn’.

Bowen was esteemed ‘the most remarkable of the young British composers’ by Saint-Saëns: an encomium arguably significant when coming from a composer who once averred that he himself composed ‘as easily as an apple tree produces apples’. While facility may be admired on one level, on another it becomes a risky label implying a lack of depth. Nonetheless, the stage was Bowen’s and he responded with three piano concertos between 1904 and 1908, performing Nos 1 and 3 under Hans Richter in the Promenade Concerts at The Queen’s Hall. By 1912 two symphonies had received favourable public notices. A fourth piano concerto followed in 1929. Bowen’s pianistic distinction, which surmounted the formidable demands of Lyapunov’s Transcendental Études and of Chopin, Liszt and Medtner, remained a focus for adulation in many quarters. However, in the years after 1912, Bowen’s position as a composer had changed drastically. The European musical establishment had been rocked by the scandalous 1913 premiere of Stravinsky’s Le sacre du printemps in Paris and by the advent of Schoenberg’s then notorious Pierrot lunaire the year before. Britain’s insularity might have put off the evil hour for latter-day romantics such as Bowen but for the apocalyptic shadow of the Great War, which effectively silenced even so great a voice as Elgar’s. Those who could not—or would not—swim sank, while Frank Bridge, a man of moral courage and creative resilience, found himself ultimately marginalized for his newly uncompromising utterance by a society still unable to bear very much reality. 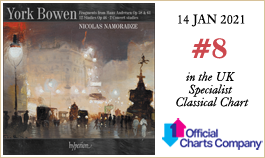