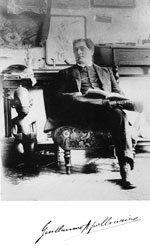 born: 26 August 1880
died: 9 November 1918
country: France
Guillaume Apollinaire was the pseudonym of Wilhelm Apollinaris de Kostrowitsky, born in Rome on 26 August 1880, the first of two illegitimate sons of Angelica de Kostrowitsky, a down-at-heel noblewoman of Polish-Russian stock, and Francesco Flugi d’Aspermont, a feckless Italian playboy-aristocrat. In 1885, the abandoned Angelica moved to France with her children; until the age of seven the young Wilhelm spoke only Polish and Italian. Guillaume (as he became) went to school in Cannes and subsequently in Nice where he did not bother to finish his baccalauréat. The upheavals Apollinaire later effected in French literature, and the insouciance and charm with which these were accomplished, were no doubt symptoms of his disrupted childhood and polyglot background (because Apollinaire was naturalized only in 1916, the greatest French poet of the early twentieth century was a citizen of France for only the last thirty-two months of his life). In 1897, at the age of seventeen, he was already as interested in anarchism as in the prevailing orthodoxy of symbolism—indeed he was destined to become the liquidator of symbolism (a Debussy song to an Apollinaire text thus seems an impossible thought, although the two men died in the same year).

After a year of Bohemian-living in Monaco, Guillaume moved to Paris with his family in 1899—a city of which he had long dreamed and which he idealized. Excluded from the literary establishment, the daily challenge of the young poet (‘un peu bête et trop blond’) was to escape poverty by whatever means necessary—he became an odd-jobs man of the printed word, putting together hasty anthologies, writing articles for other writers (a practice known as ‘faire le nègre’), and proving himself a master-pornographer, admired not only for his salacious imagination, but for his style and wit. Apollinaire’s beloved Paris now became a base for travel on a shoestring. In 1899 he and his brother Albert (passing themselves off as Russian nobility) lived for a while near Liège, where they learned the local dialect, explored the Walloon countryside and engaged in amatory adventures. More in earnest was Guillaume’s futile courtship of Linda Molina in 1901. Striking it lucky in the same year with Vicomtesse Milhau who needed a tutor for her daughter, Apollinaire was whisked off to Germany and discovered the Rhineland at the same time as initiating an affair with Annie Playden, English governess of the Milhau children, a relationship that was to drag on for three years. In February 1902 the poet visited Cologne during the Carnival and went on to visit Berlin and Dresden. In March he took in Prague, Vienna and Munich.

Apollinaire’s fortunes improved somewhat in 1903 when a job was found for him in Paris working in a bank. He visited London in the vain hope of persuading Annie to elope with him. At this time he began to meet more important people in artistic circles: the writers Max Jacob, André Salmon and Alfred Jarry, and the painters Picasso and Derain (the latter illustrated Apollinaire’s first book, L’enchanteur pourrissant, in 1909). In 1905 he visited Holland; by 1907 he left his mother’s apartment and moved into his own lodgings in Montmartre where he frequented the louche bars and the famous Bateau-Lavoir, the nickname for the insalubrious building in Montmartre where avant-garde artists, mainly painters (including Picasso), had taken up residence. Apollinaire’s profound knowledge of modern painting and his famous book Les peintres cubistes (1913) have their origin in this period. In 1908 Picasso introduced the poet to the painter Marie Laurencin with whom Apollinaire had a passionate and stormy affair. Marie terminated the liaison in 1912 on account of the poet’s jealousy and his incorrigible infidelities; there remained, nevertheless, an emotional link between them. Apollinaire’s poetry implies, disingenuously, that women habitually mistreated him, but his perpetually roving eye was largely to blame for the failure of his relationships.

During these years poems by Apollinaire appeared in various reviews and newspapers. In 1911 he published Le bestiaire où le cortège d’Orphée, poems set by Poulenc seven years later. The woodcuts were by Raoul Dufy, although the poet would have preferred Picasso. He spent some days in prison, bizarrely suspected of being mixed up in the famous theft of Leonardo’s Mona Lisa from the Louvre; as a Russian national he risked deportation from France. (He was an associate of someone who had regularly stolen other artefacts from the museum.) This low point was followed by increasing literary success, although it was lost on nobody that the poet kept questionable company and was a ‘wide boy’ ready to sweep aside with audacity the accepted way of doing things—serving the pizza with a florid gesture, as someone put it, while fixing the lady with a long and languorous look—hardly in the tradition of the impeccably disinterested French waiter. At the same time he sincerely professed himself a dyed-in-the-wool Parisian and patriotic Frenchman precisely because he was neither Parisian nor French; like an Indian-born writer bemoaning the end of the British aristocracy, he revelled in a nostalgia for a vieille France that another side of his nature sought to modernize by any and every means, even if his rampages might result in its destruction.

1913 saw the publication of Apollinaire’s most famous collection of poetry, Alcools. On the outbreak of war in 1914 he volunteered immediately but, as a Russian citizen, encountered a barrier of red tape. In September of that year in Nice he met Louise de Coligny-Chatillon (‘Lou’) who temporarily resisted his advances. He then successfully enlisted in the 38th infantry regiment at Nîmes. In December 1914 ‘Lou’ capitulated to the poet in uniform and the couple spent an idyllic week together. On a train journey to Nice-Nîmes in January 1915 Apollinaire met the young Madeleine Pagès to whom he became engaged later in that year. The following Easter he was sent to the front at Champagne; by November 1915 he had been promoted to sub-lieutenant in the 96th regiment and had experienced the horror of the trenches. On 17 March 1916 he suffered a head-wound from shrapnel at Berry-au-Bac and underwent a lengthy convalescence and sub-cranial surgery. The relationship with Madeleine Pagès had petered out. In September his collection of stories, Le poète assassiné was published. Although only thirty-six himself, he had already become the idol of a group of younger men who espoused the literary avant-garde—Breton, Tzara, Reverdy and Cocteau. He wrote the programme note for the Cocteau-Satie ballet Parade in 1917; shortly afterwards his play Les mamelles de Tirésias was performed, the work for which he first formulated the label ‘surrealist’; in 1946 Poulenc was to turn it into an opera, his greatest homage to the poet. During his recuperation from a lung infection the poet met Jacqueline Kolb who became his wife shortly afterwards. The poet, weakened by his illnesses, died of Spanish flu on 9 November 1918.