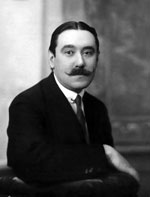 born: 9 December 1882
died: 14 January 1949
country: Spain
Joaquín Turina was born in the city of Seville, deep in the heart of Andalusia. His father, like so many parents, hoped his son would enter a well-remunerated profession, such as medicine, but he acceded to his son’s desire to pursue music. Under the tutelage of the cathedral’s musical director, the young Turina’s gifts were revealed.

One of the challenges facing aspiring Spanish composers at this time was the long-standing and quixotic pursuit of Spanish opera. Turina’s biblically inspired opera La sulamita (‘The Shulamite’, from the Song of Solomon) met the same reception as so many of his countrymen’s operas—interest, even admiration, but little commercial success or critical acclaim. Lacking the opportunity to produce his opera, Turina turned to zarzuela, a uniquely Spanish form of opera with spoken dialogue. However, his first attempt at the genre, Fea y con gracia (‘Homely, but charming’), received only lukewarm reviews in Madrid.

At this point Turina faced another reality of the time—the irresistible lure of the dynamic musical scene in Paris. Arriving in 1905, he was warmly received by the large community of Spanish musicians living there, which included Isaac Albéniz and Manuel de Falla. Turina entered the Schola Cantorum, an institution with a conservative tilt, but he also found Debussy’s radical aesthetic appealing. The premiere of Turina’s Piano Quintet Op 1 was a milestone in his career, but not in the way one might imagine. Upon hearing this piece, Falla and Albéniz advised Turina to ‘listen to more familiar voices’, to embrace his heritage as an Andalusian musician. Albéniz is reported to have said : ‘You must give me your word that you will not write music like this again. You must base your art on Spanish popular song, on Andalusian music, because you are from Seville.’ In later years Turina would recall this conversation saying: ‘Those words were decisive for me, [and] they are a piece of advice that I have tried to follow throughout my career.’

The result of this encounter with Albéniz and Falla was an outpouring of music that established Turina as one of the outstanding Spanish composers of the early twentieth century. Graduating from the Schola in 1913 he returned to Madrid and immediately connected with the most prominent musicians in the capital city. His symphonic poem La procesión del Rocío, premiered under the baton of Enrique Fernández Arbós, received widespread acclaim. By now it was clear that the advice received from Albéniz and Falla was the guiding force behind his music. Nearly all of his works bore allusions to Spain, and more specifically to Andalusia. Titles such as Sinfonía sevillana (1920) were common.

In Madrid he worked in several mediums, premiering his symphonic works with Arbós and composing chamber and solo works for the guitar, piano, strings and voice. In addition, Turnia served as the choirmaster at the Teatro Real until its closure in 1925. Among the works of this period is the Piano Trio Op 35, which was awarded the National Music Prize in 1926. By 1930 he was appointed professor at the Real Conservatorio in Madrid. Turina’s fame extended beyond Madrid; in the spring of 1918 he had been invited by Diaghilev to conduct the orchestra of the Ballets Russes as they toured sixteen cities throughout Spain.

The Edad de Plata, or ‘Silver Age’, was a cultural renaissance in Spain during the 1910s and ’20s. Turina’s achievements contributed substantially to this vibrant climate. However, in 1931 Spain entered a period of political uncertainty that ended with national disaster. As Spanish society polarized during the last years of the Second Republic (1931–6), the spirit of the Edad de Plata was increasingly hard to sustain. It dissipated and was ultimately crushed by the Spanish Civil War (1936–9) and its aftermath.

With the end of hostilities in 1939, Turina was able to regain his footing, soon accepting both an appointment with the Music Commission of the Ministry of Education and an invitation from the Academia de Bellas Artes de San Fernando to join its ranks. By the time of his death in 1949 he was again highly regarded throughout the country. As a tribute to his contributions to Spanish culture he was awarded the Grand Cross of Alfonso the Wise. 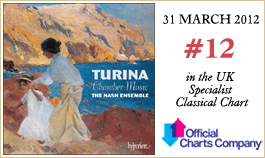