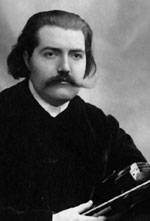 born: 1878
died: 5 December 1955
country: France
Lucien Durosoir (1878–1955) was one of the best-known concert violinists of the fin de siècle. He studied the violin in Germany with Joseph Joachim and Hugo Heermann. He enjoyed a brilliant solo violin career, introducing French repertoire by such composers as Saint-Saëns, Widor and Fauré to Austro-German audiences. At the outbreak of the First World War, Durosoir was conscripted into the French army. During the war, under the protection of General Charles Mangin, Durosoir joined a group of musicians, which also included André Caplet and Maurice Maréchal, to form the chamber ensemble, the ‘Quintette du Général’. This ensemble presented many military concerts. An accident shortly after the war ended Durosoir’s concert career, and he turned to composition, choosing to live in South-West France rather than Paris. As a composer, he concentrated on chamber music.