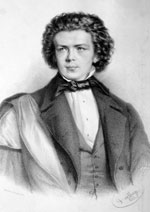 born: 28 November 1829
died: 20 November 1894
country: Russia
Best-known in his lifetime as one of the great piano virtuosos of the nineteenth century, but also a composer, conductor, teacher and administrator, Anton Rubinstein was born in the village of Vikhvatnets, in Bessarabia, to a Jewish family of German-Polish origin. His father was a prosperous merchant, and the family were baptized as Christians when Anton was two years old. Three years later they moved to Moscow. A Wunderkind as a pianist—as was his younger brother Nikolai—he began playing in public at the age of nine. His reputation grew so swiftly that his Paris debut in 1841 was attended by Liszt, Chopin, Kalkbrenner and Meyerbeer, and subsequently he became a piano pupil of Liszt. From 1844, encouraged by Mendelssohn and Meyerbeer, he studied composition in Berlin under Siegfried Dehn (who had also taught Glinka), and returned to Russia in 1848 as chamber virtuoso to the Grand Duchess Helena Pavlovna, sister-in-law of the Tsar. In the 1850s Rubinstein travelled widely in Western Europe and was well known to the Schumanns and Brahms as well as to the Liszt circle. In 1858 he was appointed Imperial Concert Director in St Petersburg, with a lifetime pension. As such, in 1862 he founded the St Petersburg Conservatory and until 1867 was its first Director. Thereafter, apart from a punishing schedule of composition, he returned to the career of itinerant international virtuoso. As a pianist Rubinstein had an enormous repertoire and immense stamina—for example, during a nine-month tour in the USA with the violinist Wieniawski in 1872–3 he gave 215 recitals spanning all the major American cities. He returned to Russia and taught again at the Conservatory in the late 1880s, but in 1891 moved to Dresden. His health was failing, however, and he spent his last year on his estate near St Petersburg, on the shores of the Baltic, where he died in November 1894 a few days short of his sixty-fifth birthday.

Rubinstein’s training in composition had been in the Germanic tradition, and he was always associated with the more ‘Western-leaning’ wing of nineteenth-century Russian music. He was also tremendously prolific, writing operas, oratorios, symphonies and concertos, plus a great deal of chamber and piano music and many songs. Although he was viewed as an important composer in his lifetime, for many years his only work to achieve lasting posthumous fame was the comparatively minor Melody in F, and only a fraction of his output of nearly 200 works is known today. He is often viewed as a musician who was betrayed by his very facility: composition came easily to him, and Brahms, who liked and respected Rubinstein as a man and as a performer, complained that he never took enough trouble over his works. Nevertheless such pieces as the Fourth Piano Concerto, the Second (‘Ocean’) Symphony, the collection of 24 ‘musical portraits’ for piano entitled Kamenniy-Ostrov and the opera The Demon show that Rubinstein was capable of making the requisite creative effort, and these works have clung to the fringes of the repertoire. They testify to a highly accomplished composer who was equally at home in the salon and the concert hall, and whose creative devotion to his native country, even if not especially indebted to Russian folk music, was profound. 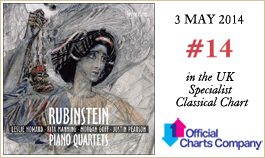