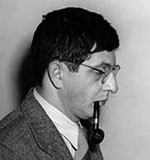 born: 29 June 1911
died: 24 December 1975
country: USA
While several of Hitchcock’s earlier films were scored by Franz Waxman, the composer with whom he is most closely associated was Bernard Herrmann (1911–1975), who wrote the scores for several of the greatest Hitchcock films of the 1950s and ’60s, including Vertigo, North by Northwest, Psycho and Marnie. In the late 1930s he had worked with Orson Welles’s Mercury Theatre (including writing music for Welles’s famous radio adaptation of The War of the Worlds) and his first film score—nominated for an Oscar—was Welles’s Citizen Kane. Herrmann had an uncanny knack of working on important films: his later credits include the scores for François Truffaut’s Fahrenheit 451 and, at the very end of his life, Martin Scorsese’s Taxi Driver. As a student in the early 1930s, he had been particularly struck by a course in composition and orchestration given at New York University by Percy Grainger, and he began to develop two passionate enthusiasms: one for the music of Charles Ives and the other for British composers, especially Elgar (whose FalstaffM he particularly loved) and Vaughan Williams. His first major concert work was the Moby Dick Cantata, dedicated to Ives and first performed by the New York Philharmonic under John Barbirolli in 1940. Subsequent non-film works included operas (notably Wuthering Heights) and concert pieces (his Symphony was finished in 1941 and he wrote a string quartet in 1965).