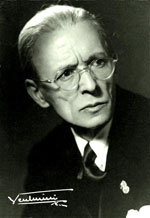 born: 20 September 1880
died: 13 February 1968
country: Italy
Ildebrando Pizzetti was born in Parma, not far from Verdi’s birthplace, in September 1880. His father, Odoardo, was a teacher of the piano, and when Ildebrando was two years old the family moved a little way south-east to Reggio Emilia. It was in this town that young Brando Pizzetti was educated, and although the environment at home was musical it was the theatre which first inspired the boy. Barely into his teens, and having already written several plays (two of which he produced with an ad hoc company), it seemed as though his artistic career was firmly fixed; but, when he was fifteen, Pizzetti entered the Parma Musical Conservatoire.

He remained at the Conservatoire from 1895 until 1901. In 1897 the directorship passed to Giovanni Tebaldini (1864–1952)—a remarkable musical scholar who, in 1909, published a sensational essay virtually accusing Richard Strauss of musical plagiarism in his opera Elektra, attempting to show that around fifty themes from Elektra (1909) bore striking similarities to those from the opera Cassandra (1905) by Vittorio Gnecchi (1876–1954).

As may be expected, Tebaldini ensured his students, including Pizzetti, became familiar with the latest music. He also introduced them to neglected early Italian music—twin influences which remained throughout Pizzetti’s adult life. Brando Pizzetti was a keen, hard-working student, and before his graduation in 1901 had already composed and heard performed a number of large-scale works including a symphony, two other symphonic pieces, a cantata with orchestra, a violin sonata and some sacred works. In October 1900, as one of a group of young students, he met Verdi, in whose presence, he recalled, ‘a complete silence descended on the scene. Very rarely, either before or since, have I had such an impression of universal religious awe.’

After his graduation Pizzetti devoted his life to composition, teaching, and writing about music. His extensive output was dominated—although not exclusively—by his music for the theatre, a notable aspect being his choice of recurrent elements of mysticism in such works. Pizzetti also became a much admired and widely respected teacher, in which capacity he held a succession of increasingly important posts. Both Pizzetti’s technique and his musical personality remained remarkably constant throughout his life. His music clearly declares him to have been a Latin composer, traditional in approach and general manner, yet always refined and polished by his mastery of a stylization which combined lyrical elements of late-Romanticism (in technique, not ethos), the clear structure of early Italian masters, and a tonal fluidity which may initially have owed a little to César Franck. Pizzetti’s critical writings include several books, one of them being a biography of Paganini. Together with Giuseppe Bastianelli, he co-founded a journal of modern music, Dissonanza, in 1914.

from notes by Robert Matthew-Walker © 1999