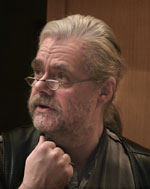 born: 28 March 1954
country: Poland
Paweł Szymański initially came to prominence in the late 1970s having studied with major composers in Warsaw (Włodzimierz Kotoński and Tadeusz Baird) and Vienna (Roman Haubenstock-Ramati). From the outset his compositional voice and aesthetic approach were distinctive. His music reveals both a deep engagement with the conventions of the past and an ironic and sometimes unsettling distance from them. In many works his inspiration is the eighteenth century, as in the Sonata for violins, double bass and percussion (1982) or the orchestral Partita IV (1986). At the base of his music is often a fully worked-out canon or fugue that he then riddles with rests or attenuates beyond recognition.

Szymański has called his treatment of borrowed or self-constructed material ‘surconventionalism’. Others might use the term ‘postmodernism’. His sources may stretch back to the medieval tune ‘L’homme armé’ (as in Lux aeterna, 1984) or to a more recent mazurka by Karol Szymanowski (in the Sonata). The Piano Concerto (1994), with the jazz syncopations of the first movement complemented by the quiet and extremely drawn-out polyphony of the second, is an example of Szymański’s fondness for bipartite structures. His range—from aphoristic pieces to extended works like his opera Qudsja Zaher (2005, premiered 2013)—constantly surprises, as do his often quixotic titles (such as Four Hevelian Dances for organ and two positive organs, 2011) and his reluctance to say anything about his music.