born: 1483
died: 2 October 1559
country: France
The composer Jacquet of Mantua suffers more than most Renaissance historical figures from problems of identity and nomenclature. He is referred to in French as Jachet de Mantoue, and during his long professional career in Italy as Iachet da Mantova and Iachetus Gallicus, but most often simply as Iachet. The use of a diminutive only, especially one derived from such a common Christian name as Jacques, gives rise to obvious problems of identification, as the well-known case of ‘little Josse of the fields’, the leading composer of the previous generation, makes clear. This Jacquet is to be distinguished especially from another composer of the same name and active at much the same time, who came from a village outside Antwerp and is known, following the name of the village, as Jacquet de Berchem. The Mantuan Jacquet was from Vitré in Brittany and bore the surname Colebault, Latinized in archival documents to Collebaudi; he is thought to have been a relative of the virtuoso singer Antoine Colebault, sometime of the Ferrarese and Papal chapel choirs, and by or for whom additional (‘si placet’) parts to various pieces are conjectured to have been written.

Although, as is so often the case, little is known of his early life, Jacquet appears to have travelled to Italy by the late 1510s, by which time he was already in his mid-thirties. After a spell at Modena, during which time his work came to the notice of the Este family of Ferrara, he took up residence in Mantua by 1527, remaining there until his death thirty-two years later. (His tenure was thus similar to that of the somewhat younger Adrian Willaert at St Mark’s, Venice, who also arrived in 1527, dying in office in 1562.) Jacquet’s principal patron was Cardinal Ercole Gonzaga, one of several members of the Mantuan ruling family who had highly successful careers in the Church: Ercole narrowly missed out on election to the Papacy in 1559, and he presided over the Council of Trent’s deliberations during the final two years of his life (1561–3). Although from 1534 Jacquet was nominally maestro di cappella of the city’s cathedral, it was Ercole rather than the cathedral chapter who paid his salary.

The Gonzaga, ruling family of Mantua since the early fourteenth century and promoted through the ranks of the nobility to ducal status in 1530, had been limited in their cultural pretensions until the arrival in the city of Isabella d’Este (1474–1539), daughter of Duke Ercole I of neighbouring Ferrara, who married the Marquis Francesco Gonzaga in 1490. During the half-century that followed, including the years after the death of Francesco in 1519, Isabella was the leading patron at the court, and it was under her influence that Mantua became a centre of secular music and of other arts. There seems to have been only limited overlap between the musical activities of the Gonzaga court and of Mantua cathedral, however—except in the sense that Jacquet was established in the cathedral but as a creature of the ducal family. This is all the more surprising when one considers that the Gonzaga did not construct a private chapel building until after Jacquet’s death, installing instead the court’s sacred music ensemble in the Lady Chapel, Santa Maria dei Voti, within the cathedral. Although the court establishment included the two major figures in the secular genre of the frottola, Marchetto Cara and Bartolomeo Tromboncino, Jacquet is the only composer of any substance to have graced the ecclesiastical organization in Mantua at this time. It was fortunate for his contemporary listeners, therefore, that he wrote such a significant quantity of sacred music, and that it is of such fine quality.

The Mantuan cathedral choir was large in comparison with the importance of the duchy, with approximately fifteen adult singers and about a dozen boys on average during Jacquet’s career. As with other Italian choirs such as that of the Sistine Chapel, however, it may well have been the case that the performing forces for polyphony were considerably smaller, possibly even single voices to a part.

Jacquet’s musical output is substantial, running to twenty-four known Mass settings, rather over a hundred motets, a cycle of twenty-six Vesper Hymns, Psalms which were published in collaboration with Adrian Willaert and others, Lamentations, and two Passion settings. In total this is a comparable achievement to the other leading figures of his age such as Willaert and Nicolas Gombert, with a greater emphasis on Mass composition but almost no secular music. No doubt this weighting reflects Jacquet’s position at the cathedral and the existence of a separate courtly musical establishment within the small city of Mantua.

The fact that Jacquet’s music is rather poorly known in modern times is no reflection on its quality, which places him among the very best of the mid-century composers. However, a considerable portion of his output is unavailable in modern edition, due principally to the early death of the musicologist George Nugent, who had been in the process of editing the motets. Nugent had contributed substantially to understanding of the true extent of Jacquet’s compositional activity by sifting out those pieces incorrectly attributed to him. But despite the recent posthumous publication of a further volume of Nugent’s edition, a considerable quantity of material remains unedited, including nearly half of the Masses. 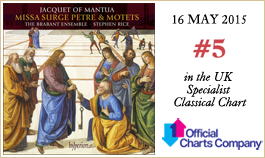