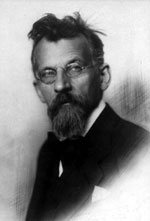 born: 5 May 1869
died: 22 May 1949
country: Germany
It’s an amusing quirk of history that Hans Pfitzner, one of the most ardently nationalistic German composers of his generation, was born in Moscow, on 5 May 1869. His father Robert was working there as a violinist in a theatre orchestra, though the family returned to Frankfurt am Main in 1872, and this is the city Pfitzner always considered to be his home town. Robert Pfitzner took up a position as leader (concert master) of the orchestra in the Stadttheater.

As a student at the Hoch Konservatorium in Frankfurt, the young Pfitzner studied piano with James Kwast (also the teacher of Otto Klemperer and Percy Grainger) and composition with Iwan Knorr, whose pupils included not only several other German composers (Walter Braunfels, Ernst Toch, Oskar Fried), but also the so-called Frankfurt School of British composers (among them Roger Quilter, Cyril Scott, Balfour Gardiner and Norman O’Neill), and the Geneva-born Ernest Bloch. Soon after graduating in 1890, Pfitzner volunteered—along with his classmate Carl Friedberg—to copy out the orchestral parts for the latest work by another composition teacher at the Hoch Konservatorium: Engelbert Humperdinck’s Hänsel und Gretel, first performed in Weimar on 23 December 1893, conducted by Richard Strauss. This work left a lasting mark on Pfitzner whose own Das Christ-Elflein (first version, 1906; revised version, 1917) owes a good deal to the magical world of Humperdinck’s score. It’s as an operatic composer that Pfitzner is best remembered, above all through Palestrina (originally subtitled a ‘Musical Legend’), first performed by the Munich Opera at the city’s Prinzregententheater under Bruno Walter in 1917. It is this work that has kept Pfitzner’s name in the repertoire, especially in German-speaking countries. He had an increasingly difficult relationship with Bruno Walter during the Nazi years, but in what turned out to be his last letter (16 February 1962—the day before he died), Walter wrote to Pfitzner’s widow Mali declaring that: ‘Despite all the grim events of our times, I’m confident that Palestrina will “endure”. The work has all the elements of imperishability.’

Walter’s reference to ‘grim events’ is an uncomfortable but essential reminder of Pfitzner’s beliefs and his nationalist politics. In 1923 Pfitzner was in hospital in Munich for a gall bladder operation and one of his visitors was Adolf Hitler. It did nothing for Pfitzner’s short-term career aspirations—but ultimately helped to salvage something of his reputation—that he unwittingly enraged Hitler at this meeting and that Hitler didn’t care for his music either. Michael Kater (in The Twisted Muse) has written that afterwards Hitler told his companion, the poet Dieter Eckart, that he ‘did not want anything to do with this old rabbi—evidently mistaking the bearded Pfitzner for a Jew’.

Poor Pfitzner: on the one hand he shared, or at least sympathized with, many of the beliefs of the Nazis (and the term ‘old rabbi’ was subsequently used by some of his detractors with the bitterest irony); on the other, Hitler himself—despite constant correction by Goebbels and others—remained convinced that Pfitzner was partly Jewish. The composer thought their brief encounter in 1923 had been quite successful, so he was devasted to have an invitation to conduct the music for the 1934 Nuremberg Rally withdrawn, on the grounds that Hitler was convinced that Pfitzner had Jewish blood. On numerous occasions Pfitzner invited Hitler to his concerts but was constantly rebuffed, or he was thwarted in attempts to fix face-to-face meetings. Having been branded a Jew, Pfitzner did his utmost to enthuse in public pronouncements about the Führer: ‘Today there is no one besides him with the strength of body, spirit and soul, this man whom we have known as our German Führer for the last ten years.’ But even this kind of flattery was to no avail in terms of helping Pfitzner’s ambition to become a highly regarded house composer to the Third Reich (unsurprisingly, Pfitzner’s simmering jealousy of Richard Strauss became obsessive; one Pfitzner biographer and supporter even described Strauss as the devil incarnate): not only did Hitler dislike Pfitzner’s music, but apparently he continued to harbour suspicions about Pfitzner’s origins to the end. In short, though Pfitzner’s politics were repellent in many ways, he never achieved the recognition he craved from Hitler himself. After the war, Pfitzner was shattered, his home in Munich had been destroyed, and for a time he was resident in a sanatorium in—of all places—Garmisch, where Strauss, his old nemesis, lived.