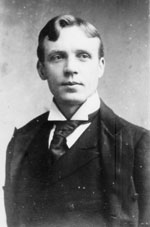 born: 2 May 1857
died: 19 November 1931
country: United Kingdom
Out of the blue on 22 April 1889 the thirty-one-year-old Frederic Cliffe, professor of piano at the Royal College of Music, but apparently with no previous achievement as a composer, had an astonishing success with a large-scale romantic symphony in C minor. The Daily Telegraph published the following remarkable review:

It may be doubted whether musical history can show on any of its pages the record of such an Opus 1. The symphony is a masterpiece, and the composer, one might think, feels terrified at his own success. For our own part, noting the imaginative power displayed in the work, the easy command of all resources, the beauty and freshness of the themes, and their brilliant development, we feel inclined to ask a question, propounded concerning another phenomenon ‘Whence has this man these things?’ Mr Cliffe has by one effort passed from obscurity to fame, and must be regarded as a bright and shining star on the horizon of our English art.

Even more surprisingly, although a longstanding member of staff at the RCM, Cliffe’s achievement doesn’t appear to have been applauded by his colleagues at the College. Stanford and Parry remain silent about him, which is doubly strange when Parry especially could be so generous towards aspiring composers.

Cliffe’s case is a curious one. He appeared suddenly as a composer, and just as suddenly, sixteen or seventeen years later, he disappeared. Cliffe’s musical legacy, for all practical purposes, is found in just six major works: two symphonies; a tone poem, Cloud and Sunshine, which was written for the Philharmonic Society in 1890; the Violin Concerto written for the Norwich Festival of 1896; a scena for contralto and orchestra, The Triumph of Alcestis, again for the Norwich Festival and written for and sung by Clara Butt at the height of her early fame; and finally a Stanfordesque choral ballad setting of Charles Kingsley’s Ode to the North East Wind, in five movements, published by Novello in 1905. The latter work is notable for the delightfully programmatic orchestral third movement—an atmospheric Nocturne. A March for the Coronation in 1911, a published anthem (Out of the Deep) and a couple of songs complete Cliffe’s surviving music.

Cliffe was born at Lowmoor, near Bradford. His father, William Cliffe, was an amateur cellist—‘a musician of no mean attainment’, according to a biographical sketch of the young Frederic in the journal of the Leeds College of Music, the Quarterly News. In what was probably a typical case of a musical father teaching a more talented son, Frederic began his musical studies at an early age. His progress may be judged from the fact that when only seven years old he had already become well known in the neighbourhood as a promising treble soloist as well as a rising pianist. By the age of eleven Cliffe was appointed as organist at the Parish Church, Wyke, a few miles north of Leeds. The Quarterly News tells us that Cliffe left Wyke two years later to ‘take the organist’s post at the Wesleyan Chapel at Great Horton, Bradford, an appointment [which] led to many opportunities for recitals and other engagements in his early teens’. He later won a scholarship offered by the new National Training School of Music, the forerunner of the Royal College of Music, and in consequence became a protégé of Sir Arthur Sullivan, with tuition in composition from Sir John Stainer, Ebeneezer Prout for harmony, and Franklin Taylor, whom he would eventually succeed, for piano.

We might ask how such a provincial freelance musician in the early 1880s kept body and soul together, if he did not have a private income. This, of course, was the problem that faced Elgar for many years. The development of the railways allowed performing musicians such as Cliffe to have a national constituency for his career from a base initially in Leeds. He left us a vivid portrait of the sheer slog such a career would entail in the early 1880s. In one ‘ordinary’ six-day period he ‘played 3 concerts in London, 1 in York, 1 in Bury St Edmunds’ and ‘opened’ [i.e. gave a recital on] a new organ in Kent. He also gave seventy piano lessons in this period. On this basis he must have been giving over three hundred recitals a year and between three and four thousand piano lessons. It is clear that with activity on such a scale in his mid-twenties in Leeds, he was doing much better financially than Elgar was in Worcestershire; and Delius, although from a far more wealthy Bradford family, was at this date still apprenticed to the family wool business, travelling in Europe.

Indeed, it is interesting to compare Cliffe’s life and career with his two pre-eminent contemporaries. He was born a month before Elgar, in not dissimilar family circumstances, and died three years before him. Cliffe was born in Bradford, five years before Delius was born there. Cliffe remained in England and developed his music through performance; Delius, while a violinist, was no touring virtuoso and followed his dream overseas. It is fascinating to see what social determinants and influences gave Cliffe his short-term success and long-term oblivion. With the enormous change of style and aesthetic that launched the twentieth century, Cliffe, like many other talented figures of late Victorian England, fell by the wayside, his short-lived success forgotten as his pupils inherited a new musical world. By the time Delius and Elgar had come into their artistic maturity in the Edwardian period, Cliffe’s work as a composer was already on the wane; and when Elgar’s first symphony changed the world of the English symphony, Cliffe’s composing career had ended.