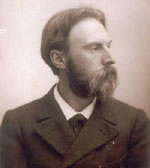 born: 5 February 1868
died: 24 June 1952
country: Belgium
Lodewijk Mortelmans (1868–1952) was one of those responsible for the Flemish orchestral renaissance, and he also looked with curiosity beyond the Belgian borders. He was a student of Benoit and Blockx when he won the Belgian version of the Prix de Rome in 1893 with his (Dutch, of course) cantata Lady Macbeth, and used the prize money to travel to Germany and Italy to broaden his cultural experience. As a music correspondent he wrote about performances in Bayreuth and kept his finger on the pulse of European musical life. He explored the world’s literature and held a great affection for art and architecture. He founded and conducted the Maatschappij der Nieuwe Concerten, a progressive music society that invited conductors such as Hans Richter, Richard Strauss and Gustav Mahler to Antwerp. But he was also known (even in the United States) as the ‘Prince of Flemish song’ and in that sense he was the perfect exporter of Benoit’s ideas. His Prix de Rome was declared to be symbolic proof of the vitality of Benoit’s school. From 1924 to 1933 he was in fact Benoit’s successor at the Conservatory in Antwerp.

Mortelmans’ artistic career therefore seemed to progress in a crab-like manner: after composing orchestral music in an original way he then perfected the traditional approach. You cannot accuse Mortelmans of being musically avant-garde or adventurous: he was aware that European classical music was following a new, atonal and even serial path, but right up to his death he was unwilling to abandon his romantic signature. In other words, Benoit’s artistic, nationalistic, romantic approach continued to be propagated (packaged in an increasingly multifaceted complex of ideas) by the directors that succeeded him. And this also meant a continuing fascination for choral singing and the solo voice.