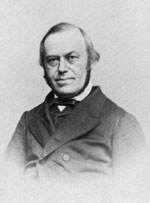 born: 19 June 1810
died: 18 July 1873
country: Germany
The German violin virtuoso and composer Ferdinand David was born in Hamburg on 19 June 1810, the son of a prosperous businessman. (Older dictionaries give 19 January, but this appears to be an error.) By a remarkable coincidence, he came into the world in the same house in which Felix Mendelssohn, with whom his career would become entwined, had been born a year before. Like Mendelssohn, David was Jewish by birth, though later in life he converted to Christianity. He showed prodigious talent from an early age. From 1823 to 1824, in Kassel, he studied with the violinist-composers Louis Spohr and Moritz Hauptmann, and in 1825 made his public debut in Leipzig, performing with his sister Louise (1811–1850), who was a talented pianist. During the next two years he and Louise played also in Copenhagen, Dresden and Berlin. In 1827–8 he became a violinist in the orchestra of Berlin’s Königsstädtisches Theater, and it was at this time that he first made the acquaintance of Mendelssohn, with whom he played chamber music. In 1829 he became the leader of a string quartet in Dorpat in Livonia (now Tartu, Estonia) that was retained by a wealthy amateur, Baron von Liphardt (whose daughter Sophie he subsequently married). Having by this time made a name as a star violinist he undertook concert tours as far afield as Riga, St Petersburg and Moscow.

Following this period, largely spent in Russia, in 1835 David answered a call from Mendelssohn, who had been appointed conductor of the Gewandhaus concerts in Leipzig. He became the Konzertmeister (lead violinist and orchestra leader), a position he retained for the rest of his life; he also took charge of church music in the city, and from 1843, after two tours in England, he became professor of violin at the newly opened Leipzig Konservatorium. In 1845 David, playing on his 1742 Guarneri violin, gave the premiere of Mendelssohn’s Violin Concerto, which had been written for him (Mendelssohn had consulted him extensively on the solo part). Mendelssohn’s death in 1847 came as a severe blow to David, who served as a pall-bearer at the funeral. At the request of Mendelssohn’s brother Paul he cooperated with Moscheles, Hauptmann and Julius Rietz in editing the dead composer’s manuscripts.

Following Mendelssohn’s death David remained in Leipzig and through his influence made that city the internationally recognized centre of violin playing in Europe. His many pupils included Joseph Joachim, August Wilhelmj, Henry Schradieck, Ludwig Abel, Engelbert Röntgen (father of the composer Julius Röntgen) and Wagner’s nephew Alexander Ritter. In his later decades he was more active as a conductor, finding violin playing difficult due to various nervous complaints, while chest ailments sometimes made it difficult for him to breathe. David died suddenly of a heart attack on 18 July 1873 near Klosters, Switzerland, while on the Silvretta Glacier with his family.

He wrote about forty works, including an opera titled Hans Wacht (which he withdrew after its two performances in 1852), two symphonies, five violin concertos, a string sextet, quartets, several sets of variations (some of them on national airs) and volumes of studies for violin, choral works and some Lieder. His two concertinos, one for trombone and orchestra, Op 4 (1837), the other for bassoon (or viola) and orchestra, Op 12—both significant contributions to a limited repertoire, especially the former, one of the first solo works for trombone ever composed—are prized by players of those instruments. It was largely due to David that much early music of the Italian, French, and German schools was preserved. Not only was he active in editing works by Haydn, Beethoven and others, but he edited and published, for purposes of study, a significant proportion of the Classical repertoire of the violin. He prepared editions of studies by Kreutzer, Rode, Fiorillo, Gaviniés and Paganini, of concertos by Kreutzer and Rode, and published the first practical edition of J S Bach’s unaccompanied violin works, which he often played in public. His most celebrated feat of editing is Die Hohe Schule des Violinspiels: Werke Berühmter Meister des 17ten und 18ten Jahrhunderts, which contains selections from Porpora, Tartini, Vivaldi, Leclair, Bach and many others.

David’s playing was said to combine the emotional qualities of Spohr with the increased brilliance and technical skill of his contemporaries. But though a virtuoso of the highest calibre, David did not prize virtuosity for its own sake, and he was almost universally esteemed by his composer-contemporaries: not only Mendelssohn but Berlioz, and later Brahms, for example. It is nevertheless probably true that he was more admired as a performer than a composer, and is remembered most for his editorial activities. Yet his works had considerable success in his lifetime, and their revival reveals highly attractive music of phenomenal accomplishment. Bearing in mind David’s close affinity with Mendelssohn it is hardly surprising that some of his music has a fairly Mendelssohnian character. This extends to the skilful handling of Classical forms with a rather more Romantic palette, but there is also an amiable individual character at work which produces music rich in wit and sentiment.