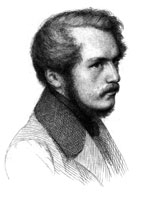 born: 22 February 1805
died: 17 February 1852
country: Germany
Robert Reinick was born on 22 February 1805 in Danzig. His father was a prosperous merchant and he received the best of education. Tragedy struck early with the death of his parents and the beginning of problems with his eyesight that were to last for the rest of his life. He had difficulties in deciding what to do as he was a gifted in the visual arts as well as in literature—it was the lyrics of Hölty (a favourite of both Schubert and Brahms) that first inspired him to poetry. As a student in Berlin he met the art historian Franz Kugler (a polymath famous for his musical, artistic and literary abilities) and the poets Eichendorff and Adelbert von Chamisso. He studied painting in Düsseldorf but was hindered in taking this career further by his eyesight—the brush was gradually replaced by the pen. In 1831 he contributed illustrations for the Liederbuch der deutschen Künstler and provided all the texts and some of the drawings for the Liederbuch eines Malers in 1837, one of the most attractive of all lieder sources. Only Heine and Geibel could claim to be set more often to music than Reinick with composers like Heinrich Marschner and Reinecke claiming a special affinity with this accessible poetry.

In search of a cure for his eyes Reinick went to Italy in 1838 and returned in 1841. He married in 1844 and moved to Dresden—thus at more or less the same time as Robert and Clara Schumann—and spent the rest of his life in that town. During this time he published one of his most famous books for children—Illustriertes ABC-Buch (1845). From this year he came into regular contact with Schumann and became a close family friend. Schumann never set any more Reinick after 1840 but for a time in 1846 there was a talk of co-opting the poet as a librettist for Schumann’s opera Genoveva—based on Hebbel and Tieck. Schumann came to regard Reinick as an unsuitable collaborator for this project, complaining of his ‘Umständlichkeit’ or ‘long-windedess’. On a personal level the friendship seemed to have prospered with Reinick invited to be godfather to Schumann’s second son Ludwig in 1848. When the Schumanns left Dresden in 1850 Reinick penned an ornate (and yes, long-winded) poetic ode for the parting ceremony; it is clear from these words that he revered Schumann and idolized Clara in particular as a ‘fairy of sound’. There is no sign in this late work of the pithier lyrics that had made him a favourite of the lieder composers. Reinick did not long outlive the Schumanns move to Düsseldorf—the town where the poet-painter had done some of his best work. He died in Dresden on 17 February 1852—a few days before his forty-seventh birthday. Later literary evaluations have not been particularly kind to Reinick but a side of his poetry—that which hymned a timeless life on the banks of the Rhine informed by a gentle German nationalism, and the power of marital love—clearly appealed greatly to many song composers in the closing years of the Biedermeier age.