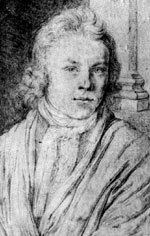 born: 1676
died: 1755
country: Scotland
John Clerk of Penicuik was born in 1676 and died in 1755. The range of his interests and abilities was enormous and he takes a crucial place in the history of Scottish culture. He was a lawyer, judge, amateur architect, artist and poet, landscape gardener and musician. He was also a signatory to the 1707 Treaty and Act of Union between the parliaments of Scotland and England, though Leo Scotiae irritatus demonstrates unequivocally that he started off life with no love for such an idea.

He studied at Penicuik, Glasgow University and the University of Leiden, where he made particular friends with the young and subsequently internationally renowned Dutch physician Herman Boerhaave. Boerhaave wrote the texts of two of Clerk’s Latin cantatas—the sacred cantata Eheu! quam diris hominis and the secular cantata Leo Scotiae irritatus. He may also have written the text of Dic mihi saeve puer—a cantata protesting at the cruelty of Cupid.

Despite pressure from his father (‘You were sent by me to Holland to studie not architecture, nor policie nor fidling nor to see curiosities for that is no dutie, but to studie law’), Clerk continued his musical studies in Rome under Corelli and Pasquini. This was an act of cultural self-assertion in another sense. Rome was the home of Roman Catholicism and had a reputation in Protestant circles such as Clerk’s for loose women and general licentiousness. It was no place for a young Protestant to visit (as his father had made clear), but for the young Clerk it was a vital and formative experience. All Clerk’s compositions seem to have been composed during or shortly after his European tour in the late 1690s.

A fascinating element in Clerk’s compositions is his use of number symbolism. However, this need not surprise us in a man who became a Freemason, who restored the fifteenth-century Rosslyn Chapel with its complex symbolism relating to the Knights Templar, and who was the great-great-grandfather of one of the greatest scientific minds of all time—James Clerk Maxwell.

Clerk studied composition first in Holland with Zumbach (whom he later assisted), and then in Rome where Corelli gave Clerk several lessons per week—a unique honour. But there are undoubted contradictions between his music and his later career, which led to his abandonment of composition as unbecoming in a judge. This is a great pity as his music operates at many levels and he could well have gone on to greater things. He had a natural melodic gift and his vocal writing is magnificent: intense, sensuous, varied. He enhances his texts with subtle illustrative touches, from a ground bass to represent Fortune’s wheel, to delicate trills on the violins depicting hovering cupids. Clerk seems to have had a command of the whole range from dry recitative, delivering words efficiently, through more melodic declamation, to full cantabile style suitable for an aria. This variety of presentation and mood was a part of Corelli’s technique which was particularly admired, and which Clerk made his own.

At a deeper level, Clerk’s cantatas offer a remarkable insight into Baroque attitudes to structure. Clerk was in Rome partly to study architecture. He became an amateur architect and drew parallels between music and architecture which he realized in both fields.

These works also provide an historical insight into social and political attitudes at the time. Odo di mesto intorno tells us much about the dynastic marriage system in England—the Duke of Bedford being possibly the richest man in Europe, and his wife being from a similarly wealthy background; but it is the cantata which reveals that they were married so young that the bedding of the bride is only about to take place two years later. Leo Scotiae irritatus shows us a Dutch writer collaborating with a Scot to claim for Scotland the right to set up a colony on the Panama isthmus without interference from the English and Spanish. Dic mihi confesses to a somewhat ambivalent sexuality, and the Miserere sets a Penitential Psalm which seeks forgiveness for adultery. At its very centre is a highly personal recitative, suggesting that Clerk himself was the penitent—though whether his adultery was carnal or a spiritual adultery with Roman Catholicism is a moot point.

Clerk’s first wife and son died young. He married again and had several children. His direct heir in the male line, the present Sir John Clerk of Penicuik, still lives at Penicuik House.