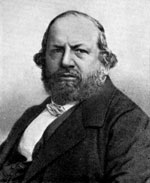 born: 24 October 1811
died: 11 May 1885
country: Germany
Ferdinand Hiller possessed talent in abundance. He began his career as a musical prodigy and later became a celebrated piano virtuoso, successful composer, conductor, writer on music and impresario. With his social skills, his artistic versatility and organizational flair, he can be compared with Felix Mendelssohn as one of the most imposing musical personalities of the nineteenth century.

Born on 24 October 1811 in Frankfurt am Main, the son of the prosperous Jewish businessman Justus Hiller and his wife Regine (née Sichel), Ferdinand Hiller grew up in a time of cultural change, during which his home town attracted numerous artists, writers and musicians. His parents were quick to encourage his musical talent. He received violin, harmony and counterpoint lessons, and made his successful concert debut at the age of ten. In 1825 he moved to Weimar where he continued his musical education with Mozart’s pupil Johann Nepomuk Hummel, then considered to be one of Europe’s greatest composers and pianists. The next milestone in Ferdinand Hiller’s career was the period he spent in Paris from October 1828. Letters of recommendation gained him entry into the great salons, where he quickly got to know musicians and writers. He became Cherubini’s protégé, met Meyerbeer, Rossini, Kalkbrenner and Berlioz, and enjoyed a close friendship with Liszt and Chopin. Financially independent, he was able to devote himself exclusively to music—composing, teaching and giving concerts.

At the end of April 1836 Hiller returned to Frankfurt, and for a year assumed the Directorship of the Cäcilienverein; the next five years were spent abroad, mostly in Italy. After the failure of his opera Romilde in Milan he enjoyed success in Leipzig with his oratorio The Destruction of Jerusalem Op 24. It was also in Leipzig that Hiller, as Mendelssohn’s deputy, conducted the 1843 Gewandhaus concerts, and in the following year he and his young wife settled in Dresden. His plan, as conductor, to create a series of subscription concerts failed in the same way as his two operas Traum in der Christnacht (1845) and Konradin (1847).

In 1847 Hiller accepted the post of Kapellmeister in Düsseldorf, where in the years to come he would play an active role in the city’s politics. In 1850 he was appointed as Kapellmeister in Cologne, which from then on became the centre of his artistic activity. He founded an orchestra which, under his influence, acquired a considerable reputation. He also worked tirelessly for the Lower Rhine Music Festival, and as Director continued to increase the renown of the Cologne Conservatoire. His numerous articles concentrate mostly on musical life and personalities. As a pianist he gave concerts throughout Europe. In the winter of 1852 Hiller went to Paris as chief conductor at the Italian Opera, but in the second half of his musical life he remained loyal to Cologne, where he died on 11 May 1885.

Ferdinand Hiller’s artistic legacy, which even today has not been thoroughly researched, was one of the most extensive and comprehensive of the era. Apart from his numerous writings, he left behind a musical output of more than two hundred works. Hiller regarded himself principally as a composer, and his most celebrated pupils include Max Bruch, Friedrich Gernsheim and Engelbert Humperdinck. As a staunch conservative in musical matters, he regarded the New German School increasingly critically. He deliberately pitted his own works against such modern developments. Praised in his youth as a most promising composer, he found it increasingly difficult to make his mark. He was always highly praised, however, as a pianist of perfect technique. He played his own compositions with success, but was also considered to be an excellent and authoritative interpreter of Bach, Mozart and Beethoven. A substantial portion of Hiller’s output was for the piano, and of all the works for solo piano it was his Rhythmical Studies Op 52 and his Ghazèles Op 54 that, because of their innovatory elements, aroused the greatest interest. He also composed chamber music with piano, and several works for piano and orchestra, which Hiller, like many composer-pianists, wrote to be included in his own repertoire. The three piano concertos (Opp 5, 69 and 170) and his Konzertstück, Op 113, were composed at various times throughout his career.

from notes by Eva Hanke ©