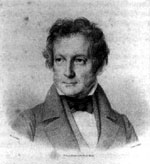 born: 18 April 1777
died: 16 February 1839
country: Germany
Berger was born into a family that was comfortably off. He soon showed signs of promise during his musical training in Berlin and was already a prolific composer in his twenties. He moved to Dresden where his closest friend was the painter Philipp Otto Runge. Soon afterwards he met his mentor Clementi and went on a tour to St Petersburg where he settled for a while as a piano teacher and made enough money to wed his childhood sweetheart in 1808. The death of his bride after ten months and the necessity of returning from St Petersburg in the wake of Napoleon’s invasion of Russia (1812) were typical of the ill-fortunes that dogged Berger’s life; he became rather down-at-heel. He left Russia, reaching Sweden and then London where he worked as a piano teacher and encountered Cramer and Samuel Wesley. He returned to Berlin and, having seriously injured his arm, gave his last public concert in 1814. After this he taught the piano for twenty-five years, numbering Felix and Fanny Mendelssohn among his pupils.

In 1816, Berger came into a circle of people rather younger than his own thirty-eight years. In a quiet house in the Bauhoffstrasse in Berlin there was a regular salon in the home of Friedrich August von Stägemann, a civil servant who took poetry seriously as a hobby. As a result his home was frequented by Achim von Arnim, Chamisso and Fouqué. Among the frequent guests were Wilhelm Hensel (destined to be one of the foremost artists of the period, and later to marry Fanny Mendelssohn), and a twenty-two-year-old poet from Dessau, Wilhelm Müller. Hensel and Müller had been brother officers in the field of battle against Napoleon. The critic and sometime poet Ludwig Rellstab, another army officer in the recent struggle, was also present. Female members of the group were Hensel’s young sister Luise Hensel (with whom Müller was in love) and Hedwig von Stägemann, the sixteen-year-old daughter of the house. A favourite character of the time was that of the Beautiful Maid of the Mill. Paisiello’s opera La Molinara (with its famous aria ‘Nel cor, non più mi sento’) was all the rage, and Goethe, Rückert, even Eichendorff had all written poems around a subject that also occurs in that famous anthology Des Knaben Wunderhorn—the devoted miller boy competes with his rivals for the hand of the beautiful, if faithless, miller girl. This group of young people decided to make a Liederspiel of their own on the subject of Die schöne Müllerin. Hedwig was to take the role of the miller girl, and Müller, partly because of his name, would be cast as her suitor. Hensel would play the Hunter (‘Der Jäger’); the roles of various other suitors were also assigned. Most of the members of the cast tried their hand at contributing verses to the work in hand, and Ludwig Berger was recruited to provide the music. Müller’s contributions were of course head-and-shoulders over the work of the others. Berger was rudely critical of Müller’s work at the time, but his set of songs uses five Müller poems (all familiar to the Schubert lover) and five by other members of the Liederspiel cast. It was only some time afterwards, in 1821 and long after he had left Berlin, that Müller completed his own cycle using his poems and sketches from 1816 as the basis for a new cycle of twenty-three poems, as well as a prologue and epilogue. It is this work that Schubert encountered in print in 1823.

Berger’s songs are mostly simple and are clearly meant for amateur performance. Nevertheless, they have a terse kind of effectiveness and greater sophistication than a preliminary reading first reveals.