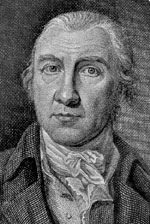 after a drawing by P J Bardou

born: 11 December 1758
died: 15 May 1832
country: Germany
Zelter was born in Berlin and remained a Berliner all his life—with the blunt, outspoken, but nevertheless good-hearted, characteristics of that city’s inhabitants. His father was a Saxon mason who moved to Prussia and Zelter inherited the family business which he ran until 1815 at the same time as developing his musical career. He began as an orchestral violinist, and eventually took over the Berlin-Singakadamie which specialized in performances of sacred music by older composers such as Handel and Bach—including the St Matthew Passion. He became a pioneer figure in musical education and was the teacher of Mendelssohn, Meyerbeer and Nicolai. He was a man of the world who was both practical and aesthetic; his gruff exterior masked a sensitive and highly thoughtful personality, and he had amazing reserves of physical energy for all his self-appointed tasks. Goethe admired this concentration and dedication, and the strength of his friendship with Zelter is reflected in 850 letters over a period of nearly thirty years (between 1799 and 1828). Over this period they spent a surprising amount of time together—some twenty weeks when added together—in Weimar, Karlsbad, Teplitz, Wiesbaden and so on. In 1812 when the composer’s son committed suicide the poet’s consolatory letter initiated the use of the familiar ‘Du’ form between them—an unheard of honour for the musician. It was Zelter who introduced the young Felix Mendelssohn, his pupil, into the Goethe circle, and the boy prodigy was a source of delight and wonder to the great poet. The frank exchange of views between the two men permitted Goethe to keep up with the cultural life of Berlin with Zelter as his faithful conduit. The composer was of a conservative disposition, most at home with the music of the past that was his stock-in-trade as a conductor. He disapproved of Beethoven at first (later there was a U-turn to hero-worship); he was scathing about Weber and, in 1829, effectively closed Goethe’s mind to Berlioz’s Scènes de Faust. Rivals for Goethe’s affection, like Bettina von Arnim, detested Zelter and saw him as a malign watchdog. Goethe seems to have avoided intimate friendship with his equals (even Schiller was never addressed as ‘Du’). He always had to be in control; why else did the poet labour unproductively for fifteen years with the composer Kayser when he could have called on Mozart? (Goethe regretted this once Mozart was dead.) Zelter’s detractors say that Goethe paid a high price by indulging in a comfortable friendship that failed to challenge him on musical matters. Who then should have been his musical adviser? There was no one else whom he sufficiently admired as a man. It remains remarkable that this poet discussed music as frequently, and in as lively a manner, as he did—and this was only thanks to Zelter.

Zelter had become a composer late in life (too late perhaps, as he said himself), and his technique is often outweighed by his feelings. And yet the best of his music shows a deep devotion to Goethe’s texts, and a musical engagement that still speak to us—even more eloquently when it is combined with a passionate quirkiness that can often seem endearing.