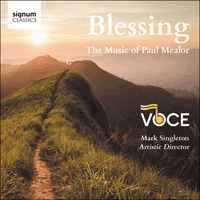 Since its foundation in 2006, Voce has grown to be the premier choral ensemble of New England. Here renowned choral expert Mark Singleton guides his singers through a rich programme of works by Paul Mealor, one of the world’s most performed living composers of choral music.

Paul Mealor (b1975) is a Welsh composer with an international fame. He has been Professor of Music at the University of Aberdeen since 2003 and his output spans opera, symphony, concerto, and chamber music genres. Mealor is a major force in the choral music world and much of his popular acclaim can be traced to the performance of his setting of Ubi caritas et amor at the wedding of HRH Prince William and Catherine Middleton in 2011. His is a special voice; skilled at communicating across languages, contexts, genres, and audiences. Indeed, he became the first composer to top both the classical and popular music charts at the same time. In this collection, Voce Chamber Choir present a disc of Mealor’s choral music—a genre with which his name has become truly synonymous.

The disc opens with a setting of the famous words of George Herbert (1593-1633): Let all the world in every corner sing. Dedicated to Tim and Wendy Parsons, and commissioned by RSCM Canterbury Area Cathedral Festival to mark 150 years since the first such event in Canterbury Cathedral 1862, this vibrant paean of praise is characterised by strong, homophonic choral singing set against a sparkling organ accompaniment. Symbolically, and in a reflective central passage, Mealor incorporates the words of Psalm 150—beginning with a solo voice, gradually expanding the melodic line to include tutti soprani, then reprising and elaborating with full chorus. This setting leaves its mark with the addition of bells and a mighty organ cadenza, signalling a return to the opening material in the praise of ‘my God and King’.

Mealor’s setting of The Beatitudes represents a welcome addition to the repertoire. The text, from St Matthew’s gospel, sums up Jesus’ teaching about what it means to live as a child of God’s kingdom. Commissioned by St Machar’s Cathedral, Aberdeen, and first performed by the University of Aberdeen Chamber Choir and St Salvator’s Chapel Choir, the slow-moving harmonies and restrained melodic lines create a calm and cerebral atmosphere. This real drama of Mealor’s setting is revealed in the words 'Rejoice, and be exceeding glad', at which point textures and tessiturae suddenly become expansive and we become viscerally aware of the glory of Christ’s teaching.

To seek where shadows are is a collection of settings of texts by Christina Rossetti (1830-1894) which was commissioned jointly by John Armitage Memorial and Pro Coro Canada. Three settings from the collection are presented on this disc: the first, Dreamland, was written, for Clarissa Dickson-Wright, in memoriam. Rossetti’s poem describes a woman’s escape from pain, a journey from the physicality of the real world to a meditative state of peace. Through its interweaving parts, Mealor invokes a gentle lyricism which is wistfully underpinned by harmony seemingly in search of its root. The attention directed by Rossetti towards ideal love is seen in her poem, Dream Love. This poem provides the text for Mealor’s Dreaming which is written for Russ and Johann Mann. He creates a wholly different soundworld, employing a rocking quaver movement in alto, tenor, and bass parts to suggest a cloud-like cushion. Above this, the soprano part paints a delicate and dreamy melody. The third, a setting of the Christmas carol, In the bleak midwinter, was written for Michael Zaugg and Julie Barron. The rich, eight-part vocal writing captures the warmth of the light of the stable set against the harshness of the wintry weather outside—a fresh contribution to the Christmas carol repertory.

Our attention is further attracted to the Christmas story in Mealor’s settings of Behold a tender babe and Now sleeps the crimson petal. In setting extracts from In freezing winter’s night (Robert Southwell, 1561-1595), Mealor takes up a commission by the Hauser-Oberschneider family to celebrate the 150th anniversary of Summer Fields School. Behold a tender babe demands careful, rhythmic singing as antiphonal phrases between various combinations of voice overlap with a recurrent quaver anacrusis. Even at its loudest and grandest moments, Mealor’s setting never loses its gentleness, presumably as he recalls the birth of his own great-nephew (to whom the work is dedicated).

The Selwyn Service was composed during Mealor’s time as a Visiting Fellow at Selwyn College, Cambridge. In writing with a specific ensemble and instrument in mind, and for a chapel with specific acoustic properties, Mealor’s musical aesthetic is clearly afforded another dimension. Inspired by the young, flexible, and highly-skilled voices of the Chapel Choir, the Magnificat incorporates particularly memorable vocal writing around the text ‘and hath exalted the humble and meek’ which is full of energy and vitality. Out of the bass solo which opens the Nunc dimittis grows a full choral texture. Notable is the attention lavished on the Gloria Patri which concludes The Selwyn Service, which confirms final arrival in the key of A flat major and which leaves the brooding key of F minor (which opened the Magnificat) far behind.

Commissioned for the enthronement of the Lord Bishop of Sodor and Man, Beneath thy compassion uses a translated text of the ancient Greek orthodox prayer perhaps more widely known by its Latin title 'Sub tuum praesidium'. The syllabic setting captures something of the timeless nature of the text, as it ebbs and flows gently through its phrases. A repeat of the first stanza is effortlessly decorated by a wordless soprano descant and, soon after, a codetta gently returns the listener to silent, prayerful state. Choral music afficionados are likely to be struck by the minim metre, tied notes, and ethereal aesthetic in Mealor’s setting of Ave maris stella—music which seems almost unimaginable without the legacy of Herbert Howells (1892-1983). The simplicity of the text (possibly dating from as early at the 8th century) presents Mary as a merciful and loving Mother and is often used as a prayer for the safe passage for travellers. Mealor’s customary lilt, derived from his immersion in the music of the Celtic nations, infuses this setting with charm.

Receiving its first performance in the Carnegie Hall in New York, Mealor’s setting of Jubilate Deo was commissioned by Distinguished Concerts International New York. The words of Psalm 100 are combined with original text by Grahame Davies (b1964). Performed here in the version for chorus and organ, it is the setting of Davies’ words which make for a striking addition to a popular text; provoking reflection amidst the boisterous setting of the psalmist David. Ave verum corpus is a Eucharistic hymn dating from the 14th century, possibly attributable to Pope Innocent VI. It is a meditation on the belief in Jesus’ presence in the sacrament of the Eucharist. Mealor’s setting carefully captures the agony of Jesus’ suffering—we hear, for example, jarring chromatic additions in the phrase ‘vere passum immolatum’. As with much of Mealor’s music, great demands are made on the singers, whose skills lie in making the most difficult moments sound perfectly simple.

Let fall the windows of mine eyes is a sequence of three texts by William Shakespeare (1564-1616). Drawing on extracts from Hamlet, Richard III, and King John, Mealor constructs a sequence in response to a commission by the Voices of Shakespeare Festival in Brecon. Mealor’s instinctive melodicism, and his careful crafting of textures, pervades these settings. Wordless passages, set against text; solo passages, set against multiple vocal divisions; all attentively handled to deliver a new, imaginative reading of Shakespeare’s old, famous words.

In a setting for upper voices and organ/piano, Mealor emphasises the simplicity underlying If ye love me—a text from the gospel according to St John. It was commissioned by St Marylebone Parish Church, London, to commemorate a parishioner, Miss Joie Macauley, and other important church anniversaries, in 2017. A simple, chordal accompaniment frees the vocal line to trace delicate patterns through the familiar text. All wisdom cometh from the Lord, with text from the book of Ecclesiasticus, was commissioned by the University of St Andrews in celebration of its 600th anniversary. The influence of the Celtic melody is at the heart of this work, and the opening soprano solo employs characteristic intervallic leaps and rhythmic snaps to great effect. A chorale-like passage, richly-scored for eight voices forms a middle section, before a return to the textures of the opening—wordless accompaniment underscoring a free, folk-like melody.

This collection of Mealor’s choral music concludes with Blessing, written in 2013 for the installation of HRH The Duchess of Cornwall GCVO as Chancellor of the University of Aberdeen. Perhaps here we catch a glimpse of Mealor at his most comfortable—melodic writing that is expressive, rising and falling with the demands of the text, and set in a supportive harmonic context. Added interest is provided in the tension between compound and simple note groupings, but mostly Blessing is about releasing the listener safely into the world—‘until we meet again’, ‘let the music measure out our days’.

Voce’s mission, as articulated by Artistic Director Mark Singleton, is to …

Serve Harmony.
Evoke its spirit and free yourself of discord.
Dedicate yourself to your ensemble, your section and your neighbor.
Be the embodiment of cooperation.
Listen, connect and fulfill your duty to the music, the team and all those who hear you.
Such is the substance of greatness—such is the foundation of Harmony.

We strive to perform each piece as a unified ensemble—to get straight to the heart of each composition. This cooperative spirit enables us to render music that expresses, as closely as possible, the intent of the composer.

Paul Mealor’s music, in turn, comes from a place of deep humility. It stirs the soul, allowing the spirit of all who hear it a direct, unconditioned experience of peace, love, compassion and a profound joy. When Paul came to work with Voce in 2017, we knew that Voce and Paul Mealor were a perfect pairing. Some things are just meant to be.

We will ever be grateful to Paul for his inspired compositions and for the love he shared with us during the process of recording this album. Voce has been truly blessed.