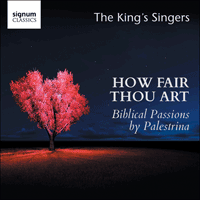 How fair thou art

Palestrina's Canticum canticorum crafts these most luxurious, and at times controversial, of texts into exquisite miniatures of polyphonic mastery. The King's Singers here perform twelve of the set, plus four of the composer's innumerable motets in honour of the Blessed Virgin Mary.

'Once you get used to the close recording and the King’s Singers’ distinctive ‘barbershop’ sound, these performances are highly enjoyable, benefiting from the singers’ diffident and yet expressive approach' (Early Music Review)» More
'The King’s Singers maintain an admirably cool approach to these 16th-century sizzlers' (The Guardian)

'I have to confess that I was somewhat surprised at the style of performance on this disc when I first heard it, but repeated listening made me come to appreciate the madrigalian qualities that the singers bring out in the music' (Planet Hugill)

Giovanni Pierluigi da Palestrina was born in 1525 or 1526 in Palestrina, a commune about 22 miles east of Rome. The earliest documented reference to him dates from 1537, in a list of the choristers at the basilica of Santa Maria Maggiore in Rome. As a young man he served as organist in the Cattedrale di Sant’Agapito in his hometown, where he married his first wife, Lucrezia Gori. His first published collection of Mass settings came to the attention of Pope Julius III (a former Bishop of Palestrina), and this resulted in an offer in 1551 to become maestro di cappella of the Cappella Guilia, the choir of St Peter’s Basilica. Palestrina moved to Rome with his wife and sons, remaining there for much of the rest of his life. In 1555 the newly elected Pope Paul IV decreed that no married men could serve in the papal choir, so Palestrina was dismissed, but granted a pension. He then found employment in 1556 at the church of St John Lateran, but it seems a lack of money meant Palestrina struggled to find singers of sufficient quality. In 1560 he abruptly left the post, before moving back to Santa Maria Maggiore the following year.

After seven years he was invited by Cardinal Ippolito d’Este to join his household at the Villa d’Este in Tivoli, a post he combined for a time with the position of maestro di cappella at the Seminarium Romanum. As Palestrina’s renown as a composer grew, he received offers to move to Vienna and to Mantua, both of which he turned down. In 1571 he was offered the chance to return to St Peter’s, once again as maestro di cappella of the Cappella Guilia. In the years following his return to St Peter’s his wife and two of his three sons died in a series of epidemics that afflicted Italy in the later 1570s. Palestrina then decided to be ordained a priest, and was made a canon of St Peter’s. However in 1581 he renounced his priestly vows after meeting Virginia Dormoli, a wealthy widow, whom he subsequently married. His second marriage gave him a level of financial security that he had lacked through his earlier life. He remained in his post at St Peter’s, but also composed a great deal of music, including his Canticum Canticorum (Song of Songs). He died of pleurisy in 1594, and was buried in St Peter’s basilica, although his grave was destroyed in the 1700s during building work. Before Palestrina’s rise to prominence, Italy had been a centre of artistic excellence, but had not had a composer to rival the early Renaissance Northern European masters such as Dufay and Josquin. However in Palestrina, Italy now had its own true master of Renaissance polyphony.

The Song of Songs, also known as the Song of Solomon or Canticles, is collection of poetry in the Hebrew Bible on the theme of the joy and ecstasy of human love. The content is often evocative, enigmatic and, at times, purely erotic. By the 16th Century the texts became a popular vehicle for musical expression by a number of composers. In 1584, towards the end of his career, Palestrina’s settings of these texts were published, and dedicated to Pope Gregory XIII. These motets are exquisite miniatures, all crafted by a master musician at the height of his compositional prowess. Unlike most of Palestrina’s sacred repertoire, much of this repertoire is little performed as the passionate texts make them less readily usable in a liturgical setting.

The historical context of this repertoire, dating from the latter part of the 16th Century, is the religious schism caused by the rise of Protestantism and the rejection of the authority of the Pope. Pope Gregory XIII (Ugo Boncompagni) was a hugely influential figure even before his election to the Papal throne in 1572. He served under his Papal predecessors, first in Rome and later in Spain, where he held the position of legate to King Philip II. Pope Pius IV made him a priest cardinal and sent him to the Council of Trent. (At one meeting of the Council the subject of church music was discussed, including an injunction against the use of music that was “lascivious or impure”.) As a result of his closeness to Philip of Spain, Boncompagni was elected Pope within 24 hours of the death of his immediate predecessor, Pope Pius V. During his reign, Pope Gregory actively supported the backlash against Protestants, including helping to fund the French monarch’s campaign against the Huguenots, culminating in the St Bartholomew’s Day Massacre of 1572. He also encouraged Philip of Spain’s plans to overthrow Queen Elizabeth I. The evocative nature of the texts of the Song of Songs may seem an odd subject for a collection dedicated to a Pope, but this particular Pope was a worldly man. His son, Giacomo Boncompagno, benefitted hugely from his Father’s elevation, first being appointed a Cardinal at the age of 24, followed by various important Papal posts, and culminating in his preferment to the Dukedom of Sora.

Framing the twelve settings of Canticum Canticorum on this recording are four Marian motets by Palestrina. The Catholic veneration of the Virgin Mary places her above other saints, proclaiming her the Queen of Heaven. This veneration is also an important part of the daily devotions of Catholic liturgy, and has consequently been an important inspiration for composers, particularly during the Renaissance. Palestrina composed settings of Marian texts throughout his life, mainly for the Cappella Guilia choir. His tour-de-force Salve Regina, comes from the archive of the oratory of St Philip, in St Maria de Vallicella. The fervour of this setting matches the passion of the settings of words from the Song of Songs.