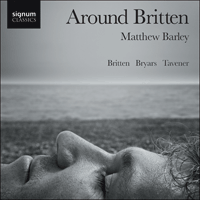 Matthew Barley adds to his reputation as one of the UK's most innovative and creative performers with the new programme and album Around Britten—celebrating the centenary of Britten's birth with a selection of his works, including the Third Cello Suite and pieces by Sir John Tavener and Gavin Bryars.

'Matthew Barley gives us [Britten's Third Cello Suite] in a superbly imaginative programme that's full of echoes of and responses to the Britten' (Gramophone)
'As always, Barley's playing is fearless. [It] is a voyage around the cello as well as around Britten, and one that never becomes relentless. In his Improvisation, there is skilfully woven reference to the profusion of styles in which he plays' (Gramophone)
'A treasurable multi-tracked adaptations of Britten folksong arrangements' (Sinfini Music)» More

Around Britten
To celebrate the centenary of the greatest English composer of the twentieth century I wanted to focus on, and expand from, a very specific part of his music for cello: the last minute of his Third Suite for Cello. This ending is Britten’s rendition of the Kontakion—the Hymn for the Dead from the Russian Orthodox Church, and is peaceful, mysterious and profound. At the time of composing Britten had five years to live and other works from this time are also pre-occupied with mortality. But despite his rapidly deteriorating health, in this work at least, Britten finds a quietly radiating peace in the face of death. The Konatkion’s peaceful spirit and associations with death and religion permeate this disc, and inspired my choice of other works, all by English composers.

Britten writes: “I wrote this suite in the early spring of 1971 and took it as a present to Slava Rostropovich when Peter Pears and I visited Moscow and Leningrad in April of that year. The occasion was a week of British Music, and our programme with the London Symphony Orchestra was made memorable by the fact that both Richter and Rostropovich joined us—surely a unique gesture of Anglo-Russian friendship. As a tribute to a great Russian musician and patriot I based this suite on Russian themes: the first three tunes were taken from Tchaikovsky’s volumes of folk-song arrangements; the fourth, the ‘Kontakion’ (Hymn for the departed), from the English Hymnal.”

Based on these four melodies the suite is a set of variations with the themes only heard in their complete versions at the end of the journey. One or more of them are present in every one of the nine movements. The suite begins simply, invoking the Kontakion (the most frequently used of the themes), and then continues on its fascinating peregrinations: the urgent Marcia, the winding, searching Canto, the Bach-like Barcarola, the alternately ‘grotesco’ (Britten’s marking) and measured Dialogo, the impassioned Fuga, flighty Recitativo, and scurrying, sinuous Moto Perpetuo—and finally the turbulently argued Passacaglia comes to a close, whereupon the four themes are played in the original form, bringing peace to the end.

Five of the pieces on this disc are my arrangements for multiple cellos of Britten songs that I multi-tracked in my home studio. The first two of these are folk songs: Greensleeves and The Salley Gardens. Both of them show Britten’s genius for adding just the right amount of something unusual to make the piece unmistakeably his own, bringing out a little more mystery than you knew a piece contained to start with.

Gavin Bryars’ Tre Laude Dolce comes with the following programme note by the composer: Over the last few years I have written a number of pieces for unaccompanied voice based on the texts and format of the “lauda”, a large collection of which appears in a manuscript collection from thirteenth-century Cortona. These laude are religious (but non-liturgical) songs that were performed outside churches and in other public places. In setting these texts for voice I do not imitate the style of the original but rather the spirit and form, and also relish the challenge of writing something quite austere and self sufficient.

Like the vocal laude these instrumental pieces are essentially solo melodic lines, though here using the string instrument’s capacity to add other notes for harmonic implication or decoration.”

Since she whom I loved is from The Holy Sonnets of John Donne by Britten. It’s one of the most touching songs I know—it can bring tears to my eyes just to imagine it, and took many, many hours to record, painstakingly recording each line of the piano part one at a time—nine cello parts in all. The song is sung by a man whose lover has died young, so his thoughts turn, jealously, to heaven and God.

Sir John Tavener has famously written masterpieces for the cello, including the mighty Protecting Veil. Here are two pieces that both commemorate the passing of close friends of Tavener’s, who writes: “The title 'Threnos' has both liturgical and folk significance in Greece—The Threnos of the Mother of God sung at the Epitaphios on Good Friday and the Threnos of mourning which is changed over the dead body in the house of a close friend”. In both Threnos and Chant, Tavener asked that the small grace notes be played in a non-Western manner, so with his permission I chose to play them with one finger sliding between the two notes quickly—more like Indian ornamentation.

Concord is the Second Choral Dance from Britten’s opera, Gloriana. I find the term choral dance an interesting one – it conjures a beautiful picture with the slow movement of the chords.

Only the five songs for multiple cellos were recorded in my home studio; the recording of the rest of this CD was a special moment in my life. My maternal grandfather was Dr. Hewlett Johnson, the brilliant and controversial ‘Red’ Dean of Canterbury Cathedral from 1931–1963, and I attended a book launch of a new biography about him at Canterbury’s Deanery in 2010. In conversation with the current dean, The Very Revd Robert Willis, I was offered the chance to record in the cathedral. Since childhood I have been powerfully drawn to this majestic and life-affirming building because of family history, so being there alone at night, making music, was one of the most exciting privileges of my life. Also on the occasion of the book launch, in conversation with Hewlett’s biographer I discovered to my amazement that at his funeral in 1966 in the cathedral, the music that was played was the Kontakion, as also chosen by Britten a few years later to underpin his third solo suite. I doubt it was played again live in that space before the night I was there to record. The sessions were magical, with Hewlett’s grave lying just yards away in the cloister—I had wondered if it might be frightening to be there alone at night, but it was anything but that; the building has an extraordinarily benign soul.

When we had finished recording I asked my producer to keep the red light on for a while as I improvised—I have included some of that improvisation here as a memory of that moment in time, around 2.30am one summer night in Canterbury Cathedral.