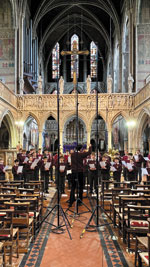 The Schola Cantorum of The London Oratory School sings the Vigil Mass at the London Oratory every Saturday evening in term time and on major feast days for School Mass throughout the year. Founded in 1996, the choir gives Catholic boys aged seven to eighteen the opportunity of a choral education within the state-education system. In addition to its liturgical role, the Schola has made many recordings and has toured widely abroad, performing throughout the USA and Europe.

In recent years the Schola has sung at the Spanish cathedrals of Madrid, Granada, Segovia and Toledo as well as at the Monastery of San Lorenzo el Real in El Escorial, and during a tour to Venice they sang at St Mark’s Basilica and at the Church of San Salvador.

The Schola sang at the canonization of John Henry Newman at St Peter’s, Rome, in 2019 as well as at a number of services and concerts in and around the Vatican, including a reception attended by HRH The Prince of Wales, and a private recital for the Pope Emeritus, Benedict XVI.

The choir is closely associated with Aid to the Church in Need, singing for services and events to help the charity’s work in providing support to persecuted Christians in the Middle East. The trebles also sing for a number of the Royal Ballet’s productions at the Royal Opera House, including The Dream and The Nutcracker. Recent concert performances by the Schola at the London Oratory include Monteverdi’s Vespers and J S Bach’s B minor Mass, the St John and St Matthew Passions, and the Christmas Oratorio.