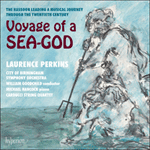 ‘Performer, teacher and promoter—Laurence Perkins was ideally placed to have created this anthology with ‘the bassoon leading a musical journey through the twentieth century’, as is confirmed over almost two and a half hours of often unfamiliar but always worthwhile music … an engaging guide throughout, Perkins gets sterling support from a wealth of fine musicians and ensembles. His booklet notes, setting each work in the context of relevant world events, are a quirkily perceptive enhancement of this enterprising and wholly recommendable project’ (Gramophone) 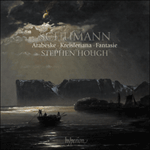 ‘If, in the issue of Eusebius and Florestan, Hough comes out firmly on the side of Eusebius that is not to say that he lacks virtuosity. The most successful single section on this disc is probably the middle movement of the Fantasie. In its closing pages Hough leaves all rivals trailing in his wake, making even the mighty Horowitz sound ungainly. What I especially liked about Hough’s handling of this movement was that, even here, Eusebius has the upper hand where most others pummel the listener into submission with mighty clods of chords. Hough never loses sight of the fact that this is poetic music … the piano sound is most agreeable and suits Hough’s approach perfectly. It is warm and ripe yet never lacks clarity. It is never hard or metallic sound. All in all, this is a recording that shows Hough at his considerable best in terms of poetry and virtuosity and deserves to be considered alongside the very best in these often-recorded works’ (MusicWeb International)» More 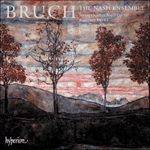 ‘Let these five elite chamber musicians convert you to the cause … you won’t find better advocates … the melancholy Romance for viola is a plum, slightly better known in its orchestral version, but here gloriously played by Power and Crawford-Phillips’ (The Guardian)» More 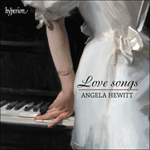 ‘Hewitt’s innate taste, discernment and creativity have resulted in a lovely experience in a world still menacingly dark and grim for reasons apart from the pandemic … as usual, Hewitt’s liner notes are a model of seamlessly melded scholarship and personal reactions and reminiscences … one especially imaginative inclusion, which was not technically a song at all, is Hewitt’s own transcription of the Adagietto movement from Mahler’s Fifth Symphony’ (Limelight, Australia)

‘Here we have that rare beast, a program of bassoon music. Laurence Perkins, Principal Bassoon with the Manchester Camerata until 2017, has assembled in chronological order a century’s worth of pieces by 14 composers that utilise his instrument in various ensembles … the program is ideally laid out for timbral contrast. Perkins plays with sensitivity and warm tone on the woodwind instrument with the most ‘human’ voice’ (Limelight, Australia)» More 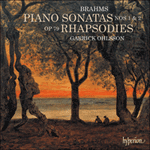 ‘Garrick Ohlsson’s account [of Op 1] … is full and faithful. He has a fine feeling for the music’s scope and scale’ (BBC Music Magazine)

‘Angela Hewitt’s spacious, uncluttered approach revels unashamedly in the pianism while still letting the original songs sing … the real treats are Hewitt’s own arrangements … the engaging liner notes weave a thread through Hewitt’s own memories as well as the parent music. In all, this beautifully recorded recital is a gift to all song-loving pianists who wrestle with the instrument’s stubbornly percussive nature’ (BBC Music Magazine)» More

‘There are some real treats, such as Bantock’s splendidly imaginative incidental music for Macbeth, scored for bassoon trio and winningly played here in its disc debut (indeed, there are no less than six premiere recordings in this set) … fascinating’ (BBC Music Magazine)» More 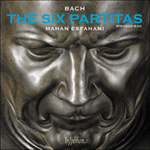 ‘Esfahani imparts a distinct character upon each of the three sections of the Second Partita’s Sinfonia. He arpeggiates the Grave adagio’s opening chord in slow motion, and continues to probe the music at free-floating leisure (imagine if Ennio Morricone had recomposed these seven bars!), easing his way into the Andante’s two-part counterpoint, in contrast to the final section’s headlong intensity. His subtle agogic stresses in the Courante create a slightly tipsy aura that will keep you alert, not to mention the Rondeaux’s emphatic off-beat accents and the hefty kick of the Capriccio finale’s left-hand octave coupling … [his] decisions regarding tempos and articulation throughout each of the Fourth Partita’s movements add up to one of this big work’s most satisfying recorded interpretations, highlighted by a hypnotic, deliberately unfolding Allemande … there’s no questioning Esfahani’s inquiring musical mind and absolute mastery of his instrument’ (Gramophone)

‘If the first volume of Mahan Esfahani’s foray into Bach’s keyboard music showcased the youthful flamboyance of the Toccatas, the sequel embraces a composer pushing at the boundaries of the suite, upscaling its possibilities through an encyclopaedic assault buttressed by assorted national styles, compositional techniques old and new and an array of ‘Galantieren’ ranging from Rondeau and Capriccio to Burlesca and Scherzo. All keyboard life is there, and they raise plenty of issues for a performer. Esfahani is keen to tackle them head on, and his liner notes make for required reading … Trevor Pinnock (on Hänssler) or Richard Egarr (Harmonia Mundi) offer less idiosyncratic readings, but then Esfahani has never been one to play it safe. BWV 825’s ‘Menuet 1’ has the solidity of a bürgermeister mindful of his respectability, but its da capo positively boogies, darting embellishments doing the not-so-heavy lifting. A set not for everyone perhaps; but at its pungent best, Esfahani’s joie de vivre can be uniquely captivating’ (BBC Music Magazine)» More 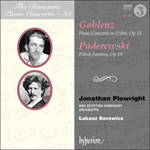 ‘Jonathan Plowright makes the best possible case for [the Gablenz concerto] in partnership with the BBC Scottish Symphony Orchestra under Łukasz Borowicz, a champion of neglected Polish music … Paderewski’s Polish Fantasy (1893), his last work for piano and orchestra, is an altogether more refined work … by turns melancholy and glittering across its four connected movements, and Plowright—who has made Paderewski a speciality—delivers all the required virtuosity’ (BBC Music Magazine)» More

‘This is Hewitt close up and personal … here, she opens her soul … the impression she conveys is of someone sitting at home on their own as the light fades, playing some favourite music purely for their own enjoyment … this is a lovely recital, one to return to often’ (Gramophone)
More